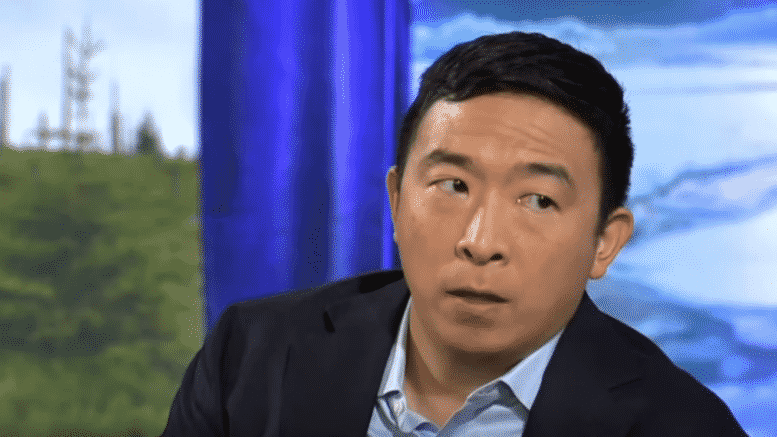 He told MSNBC host Ali Velshi that “we might not own our own cars” by 2050 to wean the United States economy off of fossil fuels, describing private car ownership as “really inefficient and bad for the environment.” Privately owned cars would be replaced by a “constant roving fleet of electric cars.”

A video posted by the GOP War Room shows Velshi asking Yang what measures he sees the world taking to fight climate change by 2050.

“You have this ability to envision the future, right, with your proposals on universal basic income. You’ve played the whole chess game out and you see what it looks like on the other end. Play the chess game out on climate change,” Velshi said. “What does the world look like to you in 2050? What physically do you think we will do differently than we do today that will result in us fighting climate change?”

“Well I mentioned before that we might not own our own cars. Our current car ownership and usage model is really inefficient and bad for the environment,” Yang said.

“You guys all probably agree with this because you’re quite young,” he told the Georgetown University crowd, adding an anecdote about driving a 1985 Honda Accord as a young man.

Yang then proposed an alternative to individuals owning their own cars.

“What we’re really selling is not the car, it’s mobility,” he said. “So if you have mobility that’s then tied into a much more, if you had like, for example, this constant roving fleet of electric cars that you would just order up, then you could diminish the impact of ground transportation on our environment very, very quickly.”

Yang’s climate plan calls for nearly $5 trillion in spending over the next 20 years. His proposal includes embracing the impacts of climate change.

Yeah. Sell that to Americans, Yang.

Ah, these Democrats, a startup to Central Planning.

Means after the terrible housekeeping by the Bolsheviks of the former USSR, now Bolsjeviks communism comes to America and there after up to the United Socialist Soviet Republic of Europe.
One happy socialist society under one government, the UN.

What do you know.

Breaking the issue into warring political factions is not the take-away here. Politics are not two-sides of one coin. That’s a really, really big propaganda lie. However, it is exactly what an intelligent parent does to help a small chil choose a ‘thing’ among many things. A smart parent takes two ‘things’ in hand, shows the child only those two things and asks, “Which one would you like?” In children this is a teaching tool to narrow choice and help them begin to make their own decisions. In the long run this technique develops the decision-making processes of children. However,… Read more »