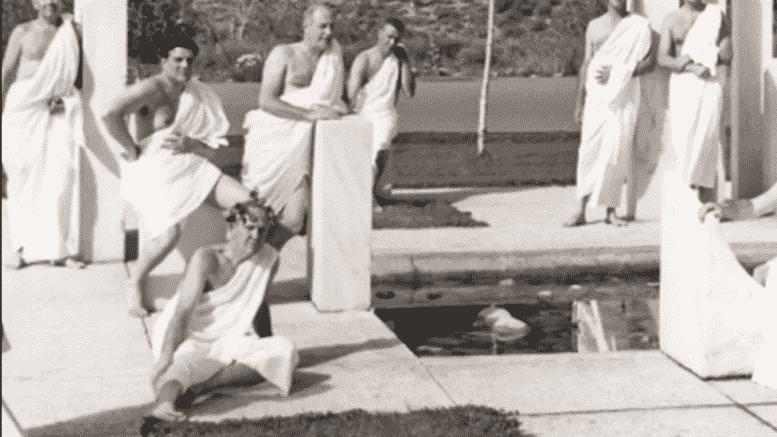 Please Share This Story!
PDF 📄
The Aspen Institute is a quasi-religious organization originally founded as Aspen Institute for Humanistic Studies. It was tightly affiliated with the Trilateral Commission in the 1970s and continues to be a mouthpiece for Trilateral policies. That Aspen campaign against Free Speech has deep globalist roots. ⁃ TN Editor

The Aspen Institute has issued the results of its much heralded 16-person Commission on Information Disorder on how to protect the public from misinformation. The commission on disinformation and “building trust” was partially headed by Katie Couric who is still struggling with her own admission that she edited an interview to remove controversial statements by the late Justice Ruth Bader Ginsburg. The Aspen recommendations however are a full-throated endorsement of systems of censorship.

The findings and recommendations are found in an 80-page report on how to combat “disinformation” and “misinformation,” which are remarkably ill-defined but treated as a matter of “we know when we see it.”  From the outset, however, the Commission dismissed the long-standing free speech principle that the solution to bad speech is better speech, not censorship. The problem is that many today object to allowing those with opposing views to continue to speak or others continue to listen to them.  The Commission quickly tosses the free speech norm to the side:

“The biggest lie of all, which this crisis thrives on, and which the beneficiaries of mis- and disinformation feed on, is that the crisis itself is uncontainable. One of the corollaries of that mythology is that, in order to fight bad information, all we need is more (and better distributed) good information. In reality, merely elevating truthful content is not nearly enough to change our current course.”

In addition to Couric, the Commission was headed by Color of Change President Rashad Robinson and Chris Krebs, former director of the Cybersecurity and Infrastructure Security Agency. Robinson was also a notable choice since he has been one of the most outspoken advocates of censorship. While some of us have been denouncing the expanding system of censorship by companies like Facebook, Robinson was threatening boycotts if the companies do not “rein in” those considered racists or spreaders of misinformation.

The Commission also includes Prince Harry who has referred to free speech protections under the First Amendment as “bonkers.”

Much of the report seems more aspirational in recommendations like “endorsing efforts that focus on exposing how historical and current imbalances of power, access and equity are manufactured and propagated with mis- and disinformation — and on promoting community-led solutions to forging social bonds.”

The Commission also appears to endorse the movement against “objectivity” and “both sideism” in the media: “Commissioners also discussed the need to adjust journalistic norms to avoid false equivalencies between lies and empirical fact in the pursuit of ‘both sides’ and ‘objectivity,’ particularly in areas of public health, civil rights, or election outcomes.”

Former New York Times Magazine reporter Nikole Hannah-Jones was one of the journalists who pushed the New York Times to denounce its own publication and promise to curtail columns in the future. In so doing, she railed against those who engage in what she called “even-handedness, both sideism” journalism.  Likewise,  Stanford Communications Professor Emeritus Ted Glasser has publicly called for an end of objectivity in journalism as too constraining for reporters in seeking “social justice.” In an interview with The Stanford Daily, Glasser insisted that journalism needed to “free itself from this notion of objectivity to develop a sense of social justice.” He rejected the notion that journalism is based on objectivity and said that he views “journalists as activists because journalism at its best — and indeed history at its best — is all about morality.”  Thus, “journalists need to be overt and candid advocates for social justice, and it’s hard to do that under the constraints of objectivity.”

However, the most chilling aspect of the report is the obvious invitation for greater forms of censorship. It calls for the government to become involved in combatting misinformation, the scourge of free speech and an invitation for state controls over speech. Ironically, there is no need for such direct government involvement when social media companies are acting as the equivalent of a state media in the censorship of public debates.

The import of the recommendations are abundantly clear:

> “Reducing Harms: Mitigating the worst harms of mis- and disinformation, such as threats to public health and democratic participation, and the targeting of communities through hate speech and extremism.

> Comprehensive Federal Approach: Establish a comprehensive strategic approach to countering disinformation and the spread of misinformation, including a centralized national response strategy, clearly-defined roles and responsibilities across the Executive Branch, and identified gaps in authorities and capabilities.

> Public Restoration Fund: Create an independent organization, with a mandate to develop systemic misinformation countermeasures through education, research, and investment in local institutions.

> Civic Empowerment: Invest and innovate in online education and platform product features to increase users’ awareness of and resilience to online misinformation.

> Superspreader Accountability: Hold superspreaders of mis- and disinformation to account with clear, transparent, and consistently applied policies that enable quicker, more decisive actions and penalties, commensurate with their impacts — regardless of location, or political views, or role in society.

> Amendments to Section 230 of the Communications Decency Act of 1996: 1) Withdraw platform immunity for content that is promoted through paid advertising and post promotion; and 2) Remove immunity as it relates to the implementation of product features, recommendation engines, and design.”

The ill-defined terms of “misinformation” and “disinformation” become more menacing when those terms are used as the basis for a government and private sector system to take “decisive actions and penalties” against those who spread such information.  The Commission is more focused on harm than the specific definition:

In the end, the Commission dismisses the classic defense of free speech while calling for greater regulation of speech to address “deep-rooted problems in American society.” However, the deepest rooted problems in our society include the denial of free speech. Indeed, the First Amendment is premised on the belief that this right is essential to protecting the other freedoms in the Constitution. It is the right that allows people to challenge their government and others on electoral issues, public health issues, and other controversies.

The Aspen report is the latest evidence of a building anti-free speech movement in the United States. It is a movement that both rejects core free speech values but also seeks to normalize censorship. In the last few years, we have seen an increasing call for private censorship from Democratic politicians and liberal commentators. Faculty and editors are now actively supporting modern versions of book-burning with blacklists and bans for those with opposing political views. Columbia Journalism School Dean Steve Coll has denounced the “weaponization” of free speech, which appears to be the use of free speech by those on the right. So the dean of one of the premier journalism schools now supports censorship.

Free speech advocates are facing a generational shift that is now being reflected in our law schools, where free speech principles were once a touchstone of the rule of law. As millions of students are taught that free speech is a threat and that “China is right” about censorship, these figures are shaping a new and more limited role for free speech in society.