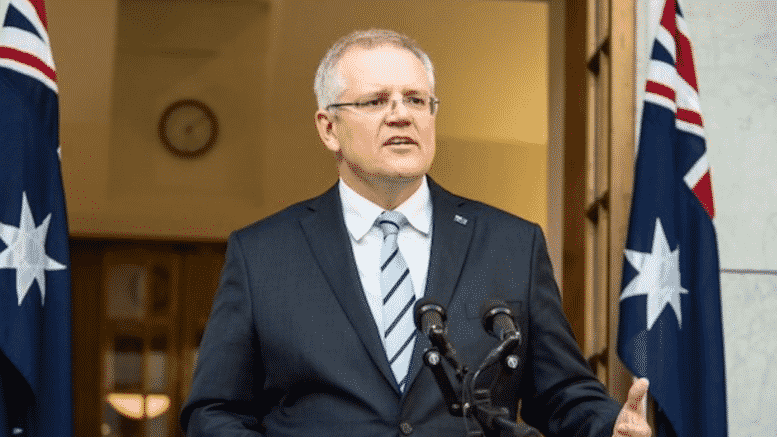 Please Share This Story!
PDF 📄
Technocrats controlling the pandemic narrative have been feverishly working political backchannels to ensure that every human on planet earth will be forced into a vaccination routine that starts with one shot but will be open-ended for future shots. ⁃ TN Editor

After reaching a deal for the country to manufacture a “promising” vaccine being developed by AstraZeneca and Oxford University, Morrison said getting the jab should be “as mandatory as you can possibly make it”.

“There are always exemptions for any vaccine on medical grounds, but that should be the only basis,” he told radio station 3AW in Melbourne.

Anticipating a backlash from vocal anti-vaccine activists, Morrison said the stakes were too high to allow the disease to continue unchecked.

“We’re talking about a pandemic that has destroyed the global economy and taken the lives of hundreds of thousands all around the world,” he said, while stressing the government has not yet made a decision.

The Australian government estimates that up to 95 percent of the population would need to be immune to the virus for it to be irradicated.

“We need the most extensive and comprehensive response to this to get Australia back to normal,” Morrison said, after announcing the vaccine would be free to all Australians.

The country already has “no jab, no play” rules that mean kids have to receive vaccines for diseases including polio and tetanus to enrol in kindergarten or school.

We’re talking about a pandemic that has destroyed the global economy and taken the lives of hundreds of thousands all around the world,” he said” NO! The “pandemic’ didn’t destroy the economy ignorant, scared governments that believed a lie did!!

Either he did or he didn’t. Which is it?

There is a law called the Biosecurity Act 2015 – the pm who debated and voted on it personally obviously forgot it existed. This ACT of law does not include mandatory vaccines. He knows this.

He also knows the constitution…

Interesting project in Germany, the Corona Extra-Parliamentary Inquiry Committee, with hearings filmed, and some transcripts available in English: https://acu2020.org/english-versions/&nbsp;” If Parliament does not do it, we, the citizens, are called upon to do it ourselves.” / “As the Corona Extra-Parliamentary Inquiry Committee, we will investigate why these restrictive measures were imposed upon us in our country as part of CoVid-19, why people are suffering now and whether there is proportionality of the measures to this disease caused by the SARS-CoV-2 virus. We have serious doubts that these measures are proportionate.”

I saw one of their broadcasts last night on bitchute. These practicing doctors are ABSOLUTELY CORRECT in their analysis. They are also correct to have an informed debate about the PROPORTIONALITY of response deployed by governments. Especially if nobody else in authority is going to do it.

I do not agree and for now I am trapped here as a dual citizen unable to leave without the vaccine according to their plans. I’m sorry but 400 deaths is not enough to call for mandatory vaccines. Why don’t they show their numbers for death by other means which they don’t do lockdown and vaccines for? If they had let it run its course like all other “virus” it would be over and done. This is a control measure to include the whole world so what do we think it is about? Mass control. Man made virus, man made… Read more »

Well said – I agree with your points.

Sorry to throw a logical spanner into the mix – but if the ‘wonderful new vaccine’ is so good – then why would those who have already been vaccinated – have anything to fear from the un-vaccinated?

Covid 19 vaccinations should be mandatory for Democrats politicians, all proponents of a One World Government, all Central Banker Elites, Antifa, Black Lives Matter and for Bill Gates and George Soros.

No one asked for what is happening now. No one demanded a cashless society. No one cried out for 5G, either. Nevertheless, some invisible behemoth with gargantuan financial clout is moving these anti-human agendas forward. A layered brainwashing has begun, attempting to turn our souls into hard, gleaming stones. Deceit rules in the grey, metallic landscape of the psychopaths.

They should first test the COVID-19 vaccine on government officials.

If they are safe, the vaccine is good.

If they die, the country is safe.

Well, if he wants it to be mandatory, why doesn’t he make it mandaotory? After all, he is the prime minister, right?? What the hell is wrong with this picture? HAS HE HAD THE REAL VAXXINES?? OR DID HE ONLY TAKE THE “FAKE” ONES? We’ll never know, will we. Ditto for all the world’s leaders. Only the peons will be given the REAL shots. They need subduing, right? The peon masses need to be put down like dogs only slower so it ain’t so obvious, I think. I wonder what their next PROJECT will be, when all of this has… Read more »

Everyone should read this article. It’s long but well worth your time.

Medicine, politics, religion and banking should never be mixed together. A real witch’s brew.