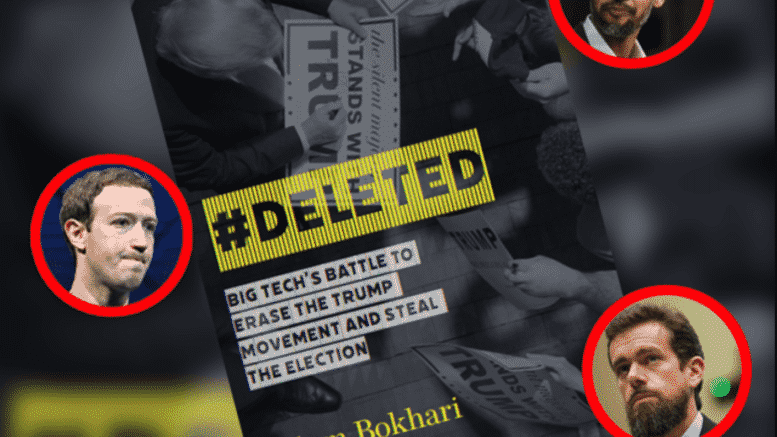 Please Share This Story!
PDF 📄
The Biden Administration will continue the embracement of Big Tech in order to usher in the global elite plan for a Great Reset of the world’s economic system. Levin and Bokhari apparently have no understanding of Technocracy so the issues are painted as far-left vs. conservative. ⁃ TN Editor

Breitbart News senior technology correspondent Allum Bokhari appeared on the Mark Levin Show on the Westwood One podcast network to discuss his book, DELETED: Big Tech’s Battle to Erase the Trump Movement and Steal the Election.

Bokhari and Levin discussed how the book anticipated Big Tech’s interference in the election and censoring of the President, and what the combination of Silicon Valley’s power with the Democrat party means for the future of the country.

The full episode can be listened to at Radio.com and Audible.

DELETED: Big Tech’s Battle to Erase the Trump Movement and Steal the Election can be purchased at deletedbook.com

BOKHARI: This book, I published it in September 2020, a month or so before the election, and unfortunately this whole tech censorship thing has been like watching an avalanche in slow motion. You can see what’s going to happen but you can’t stop it.

LEVIN: And yet you kinda knew it was coming, how did you know?

BOKHARI: I’ve been covering this topic for about five years, since 2015, as a tech reporter for Breitbart News. I think what we saw back then before tech censorship was a really big issue, was that the internet was the greatest platform for free speech that ever existed, but we also had a new generation of far-left activists emerging that were more hostile to free speech than ever before, so it was inevitable that those two trends would come into conflict. And that was really just supercharged after Trump won the election in 2016. And the book isn’t just my opinion, it also includes interviews with whistleblowers inside Silicon Valley companies, inside Google, inside Twitter and Facebook, all of whom said that, as soon as Trump won, there was complete panic inside Silicon Valley…”

LEVIN: And by the way, panic in Silicon Valley with big tech, panic in big media, in Manhattan and Washington, all kinds of panic. So the Democrats in these operations, whether it’s Chuck Todd or George Stephanopoulos, Jake Tapper, all the rest — they went into full attack mode from the moment this man was elected.

BOKHARI: That’s absolutely correct, and one of the points I try to get across in the book is how all of these forces work together. Not just big tech, but the media and the politicians on the Democratic side pressuring big tech to censor president Trump, as well as extremely well-funded NGOs, the deep state, all of these forces recognized the danger of allowing a free and open internet, of allowing alternative conservative media to compete on an equal playing field with the mainstream media.

LEVIN: It’s not really violence, is it. They’re painting with an awfully broad brush, people who’ve never been violent in their lives. Politicians they disagree with, they claim they’re inciting violence and so forth. They have no proof, no evidence, in many cases no connection whatsoever. This is just a crackdown on competition and a crackdown on speech by a tyrannical left, isn’t it?