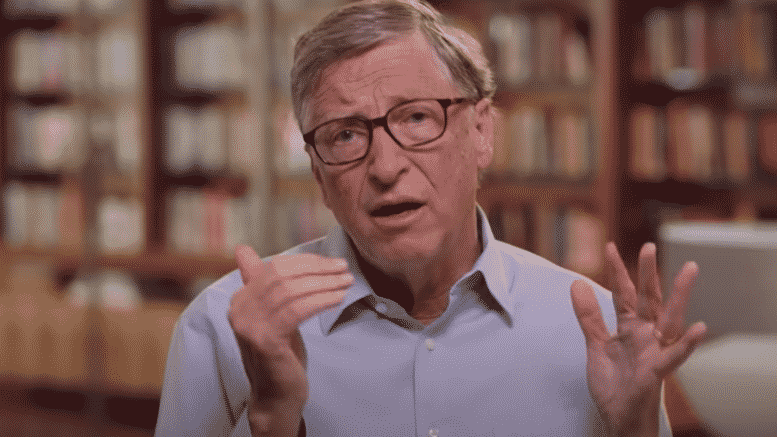 Please Share This Story!
PDF 📄
Technocrats are raising the bar on sticking needles into your body, saying that a single vaccine won’t be enough. Rather, you will need multiple doses over a short period of time to deliver immunity. ⁃ TN Editor

Bill Gates has warned that multiple doses of any coronavirus vaccine could be necessary as he slammed Donald Trump’s handling of the pandemic.

Microsoft billionaire Gates said “serious mistakes” have been made by the White House as he predicted schools could be closed until fall 2021.

Speaking during an interview with Norah O’Donnell on CBS News, Gates said he had faith in the development of a coronavirus vaccine.

However, he warned it could take an “unbelievably big number” of doses to beat the virus.

He said: “None of the vaccines at this point appear like they’ll work with a single dose.

“That was the hope at the very beginning.”

However, he said the solution will “improve over time” even though there will be “a lot of uncertainty” about the vaccine.

The philanthropist – who is worth $98billion, the second-richest man in the world – has offered £300million to help fund research into the vaccine.

Gates also described the closures of schools as the “biggest cost” of the pandemic after deaths as he said classes likely won’t be all back until fall 2021.

He said: “This next academic year does hang in the balance. It is extremely important.”

More should be done to help schools take learning online to ensure kids get their educations, he said.

The 64-year-old tech boss now spends most of his times working with the Global Health division of the Bill & Melinda Gates Foundation.

He had been warning of the threat posed to humanity by pandemics since 2015 before the coronavirus outbreak.

During the interview, Gates was also heavily critical of the Trump administration – with the US having the highest death and case count in the world with 146,192 and 4.1million.

Gates said: “Some of the policies were a mistake. Opening up bars – the economic benefit versus the infection risk – a lot of policies like that made it a mistake.”

The Microsoft mogul emphasized that social distancing, wearing masks and developing a vaccine are now key in beating Covid-19.

He conceded however some of the “serious mistakes” were made because of a lacking of understanding of the virus.

This Dr. presents some very scary details of the crap-filled vaccines the New Worlders want to jam into us…
Dr. Warns New COVID-19 Vaccine Is Untested And Will Alter Your DNA

I’m a 20+ year veteran in artificial intelligence that has worked for world’s largest tech companies. Please understand there are many potential uses for nanotechnology in vaccines that is not currently regulated. It’s not just for your health or safety. We need legal protections for dual-use misuse. Vaccine nanotechnology digital capabilities will require frequent updates just like a computer. Gates knows that. He’s preparing us for initial installation and upgrade of his nanotechnology. The related vaccine COVI-PASS with your digital ID2020, digital currency, medical record, social score and your entire digital profile will minimally prevent you from leaving your home. It… Read more »

Thank you so much for taking the time and effort to bring these frightful topics to our attention! We sure won’t be hearing even a peep from the controlled-media that will present any news items of this nature as a beautiful, delicious cake….laced with cyanide.

Combined with Gates Foundation UN Agenda 2030(Successor to Agenda 21), the blueprint for eugenics is crystal clear. I suggest people ck out RFK jr website about the relationship between vaccines and autism. My first encounter with the vaccine criminals was almost 30yrs ago attending a discussion on Gulf War Syndrome presented by Dr Garth Nicholson of MD Anderson. I suggest reading up. This is absolutely evil.

Time to find a final solution for this sick psycho.

It would be interesting to have Bill Gateswith his “knowledge” and “understanding” of the virus have a conversation with Dr Zach Bush…he could even bring Dr Fauci in tow!
“

my name is bill gates, I identify as a doctor and a health expert, I am very experienced in computer virus

That is why this virus should be eradicated

Well Hi there everybody , my name is Bill Gates , and i love you. You see the reason why we need you to take several vaccines is that we have to make sure we that we switch off that gene that allows humans to naturally conceive within the next twenty years , we need to make sure we have altered your DNA to a level that its changed forever with generations to come. Anthony Fauci says we dont succeed the first time then we try and try again ! When we are happy that your body hasn’t rejected our… Read more »

nothing they do is going to work because they do not know what they’re doing and what they want to do is not working for them. we’ll get them at the appropriate time but for now they have the bully pulpit.

So how come neither he nor his family get vaccinated? If they are so safe and life saving and you want all of us to get vaccinated, then shouldn’t they get a shot or two?

Now this is interesting! https://www.youtube.com/watch?v=G8Kmcivi1u4&feature=youtu.be

I don’t see why why this Bill gates is in the global vaccine business in the 1st place – last I heard he was the Microsoft windows guy.

The only “mistake” that has been made is in listening to any of Gates’ technocratic tyranny to begin with! Citizens! where does he get this pseudo-authority to make such maniacal edicts….but worse, why are we regarding any of his, and his affiliates, pronouncements?! The African continent seems to be showing more wisdom than Europe and America combined! Study, folks, instead of taking in all the msm bunk and outright deceptions – there is much research to show us what the “stats”, evidences etc., truly are and how this is completely killing our economy. And don’t be deceived, President Trump started… Read more »

How do we stand up and protect ourselves? They’ve already shown us that they can make us not leave our homes, wear masks, not attend church. So when the vaccines come along to sicken, kill or alter our DNA, I guess we’ll line up?

Cathy – suggest that you take a look at http://www.CitizensForFreeSpeech.org asap.

UTube has Robert F. Kennedy Jr, Esquire debating Alan Dershowitz Esquire re forced vaccinations in the courts. AD was Jeffrey Epstein’s attorney during the Acosta deal that got Epstein off too lightly, friends with Gates who he seems to refer without specificity in this debate, and AD in the previous interview didn’t know anything about Harvard biology chair Charles Leiber’s arrest at all, as if he never heard of the hugest scandal at Harvard in history. The children’s health Defense likely has this interview by ben-David.

colloidal silver and zinc and vitamin c and the 90 daily minerals and vitamins protect me so you can keep your vaccine billy boy!

Why don’t Bill Gates and his ilk just admit that they are nothing but natural born eugenicists. I for one don’t need anything that Bill Gates is peddling. Not only have I learned to successfully attend to my own health. I have knowledge of doctors (in several fields of medicine), who practice the Hippocratic oath, and know how to successfully treat all types of viruses and diseases. Bill Gates. Dr. Fauci. The only people who need your input or medical unexpertise are those who are ready to have themselves euthanized. Even that would be more humane, and a better alternative… Read more »

This psycho, just because he is rich- wants to control the world by injecting the crap into us. Time for him to say goodbye to this world