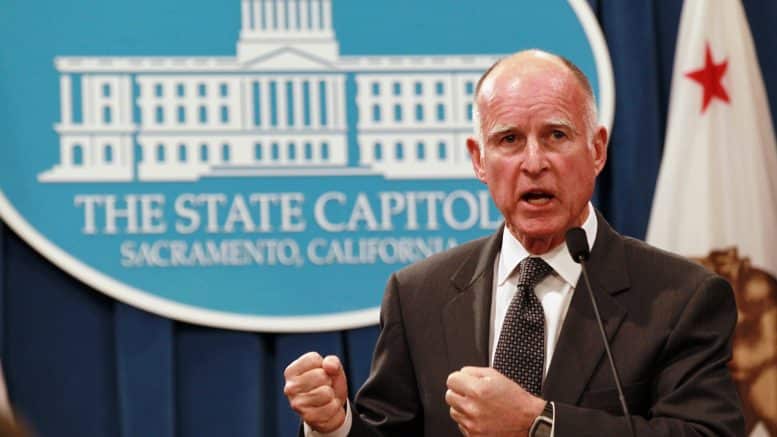 Gov. Jerry Brown has more in common with a Technocrat than a left-wing Democrat: he is totally ‘green’, promoting Sustainable Development, global warming, alternative energy, smart cities and unlimited immigration. Whatever the United Nations proposes, Brown puts into practice, which is the unspoken reason NY Times can call him a “pragmatic, results-focused technocrat”. ⁃ TN Editor

Across the country, Democrats are winning primaries by promoting policies like universal health insurance and guaranteed income — ideas once laughed off as things that work only on the “Left Coast.”

At the same time, national politicians from both sides are finally putting front and center issues that California has been grappling with for years: immigration, clean energy, police reform, suburban sprawl. And the state is home to a crop of politicians to watch, from Kevin McCarthy on the right to Gavin Newsom and Kamala Harris on the left, part of a wave that is likely to dominate American politics for the next generation.

California, which holds its primaries on Tuesday, has long set the national agenda on the economy, culture and technology. So maybe it was just a matter of time before it got back to driving the political agenda, as it did when Ronald Reagan launched his political career in the 1960s. But other things are happening as well. The state is a hub for immigrants, a testing site for solutions to environmental crises and a front line in America’s competition with China. On all sorts of big issues that matter now and will in the future, California is already in the game.

In a way, California even gave us Donald Trump. So much of his “training” to be president came while he was an entertainment celebrity, on a show that, for a stretch of its existence, was produced in Los Angeles. And of course the means of his ascent — the smartphone, social media — came out of Silicon Valley. That’s a lot to have on a state’s conscience.

California is a deep-blue state — only 26 percent of its residents approve of Mr. Trump, and Democrats dominate the Legislature, statewide offices and most large city governments. But the state’s leaders are also aware that setting the political agenda for the country means making a stark break with naked partisanship. Getting that right will determine whether California, in its newly dominant role, perpetuates the political divide or moves America past it.

For decades, California, even as it grew in size and wealth, was seen as an outlier, unintimidating, superficial and flaky. We were no threat. We were surfer dudes and California girls who got high and turned on, tuned in and dropped out. We spawned Apple and Google, but we also spawned hippies and Hollywood. For a time, our governor was nicknamed Moonbeam.

As recently as the 2000s, with California at the center of the subprime-mortgage crisis, it was fair to wonder whether we had a future; a popular parlor game was to imagine how the state might be divided up into more manageable statelets.

That was the old California.

The new California, back from years of financial trouble, has the fifth-largest economy in the world, ahead of Britain and France. Since 2010, California has accounted for an incredible one-fifth of America’s economic growth. Silicon Valley is the default center of the world, home to three of the 10 largest companies in the world by market capitalization.

California’s raw economic power is old news. What’s different, just in the past few years, is the combination of its money, population and politics. In the Trump era, the state is reinventing itself as the moral and cultural center of a new America.

Jerry Brown — Governor Moonbeam — is back, and during his second stint in office has been a pragmatic, results-focused technocrat who will leave behind a multibillion-dollar budget surplus when his term ends in January. But he has also been a smart and dogged opponent of the Trump agenda, from his high-profile visits to climate-change negotiations in Europe to substantive talks in Beijing with President Xi Jinping.