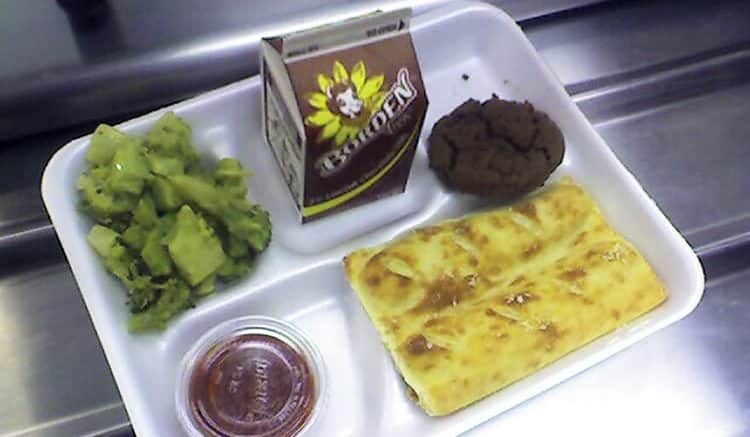 Technocracy, justified by Global Warming, is driven by Scientism. Scientism is a religion where science is the oracle and scientists and engineers form the priesthood. As such, it is irrational, inconsistent and arbitrary. ⁃ TN Editor

FOE gave kids a lunch menu designed to eliminate foods it says are “unsustainable for our planet.” The new menu features far less meat and more plant-based food. Any meat or cheese the school did use came from “pastured, organic dairy cows.” The student’s lunch menu went from beef hot dogs and pepperoni pizza to vegan stir fry tofu and vegan tostadas. The new FOE-approved menu served meat and cheese-less frequently and reduced the portion sizes.

“This is a landmark moment for school food,” Jennifer LeBarre, head of nutrition services for Oakland Unified School District, said in a FOE press statement. “We were so excited to see how the data showed that we could reduce our carbon and water footprint by serving healthy, delicious food –– like the vegetarian tostadas with fresh made in-house salsa, that kids absolutely love –– all while saving money.”

The district and FOE claimed the lunch program was healthier than before, but only on the basis that food from plants is typically healthier than meat. The study justifies its health claims by stating average poultry consumption fell. FOE did not undertake an actual study into whether or not the lunches improved student health.

FOE says it partnered with the school to provide a “roadmap for change” to encourage other schools to fight global warming via student lunches. The green group hopes Oakland’s example will encourage numerous other school districts to switch to a similar menu.

If every school district in the U.S. followed Oakland, the reduced CO2 emissions would be equal to removing 150,000 cars from the roads, according to FOE.

“An anocracy is a government regime featuring inherent qualities of political instability and ineffectiveness, as well as an “incoherent mix of democratic and autocratic traits and practices.””

Yep. The power of a lunch packed by a parent and sent with the student, and when old enough, made by the student for themselves. Heaven help anyone who tried to get in the way of ME or MY CHILD choosing my child’s diet. Yeah. No.