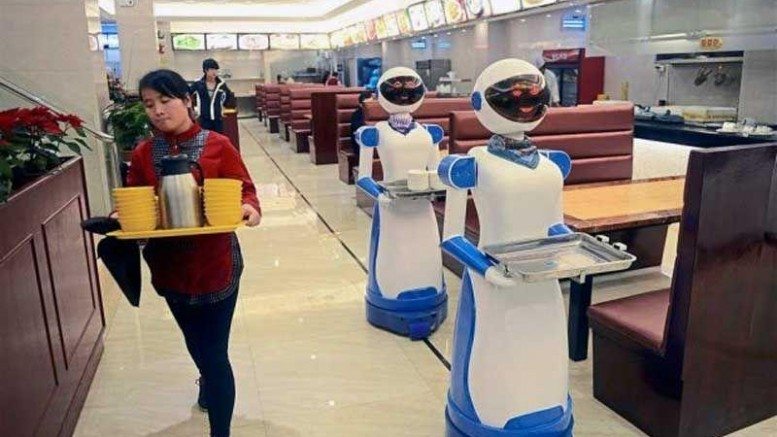 TN Note: As a Technocracy, China is showing its proclivity for efficiency regardless of cost to humans.

China is laying the groundwork for a robot revolution by planning to automate the work currently done by millions of low-paid workers.

The government’s plan will be crucial to a broader effort to reform China’s economy while also meeting the ambitious production goals laid out in its latest economic blueprint, which aims to double per capita income by 2020 from 2016 levels with at least 6.5% annual growth. The success of this effort could, in turn, affect the vitality of the global economy.

The scale and importance of China’s robot ambitions were made clear when the vice president of the People’s Republic of China, Li Yuanchao, appeared at the country’s first major robotics conference, held recently in Beijing. Standing onstage between two humanoid entertainment robots with outsized heads, Li delivered a message from China’s leader, Xi Jinping, congratulating the organizers of the effort. He also made it clear that robotics would be a major priority for the country’s economic future.

Many of the robots on show at the conference’s exhibition hall were service or entertainment robots such as automated vacuum cleaners, cheap drones, or quirky looking machines designed to serve as personal companions. But there were also many industrial robots that signaled the real impetus for China’s robot push: its manufacturing sector.

China is already the world’s largest producer of everything from clothes to electronics, but much of it depends on low-cost, low-skill labor. And even as economic growth has slowed, wages continue to rise across the country as the economy evolves. The Chinese government is also eager to see its workforce diversify and its manufacturing industries become more technologically advanced.

Robots might offer a clever solution to some of these challenges. If more robots can be deployed successfully in many manufacturing plants, this would increase efficiency while also allowing some workers to be replaced. At the same time, because more capable robots will require advanced sensing, manipulation, and intelligence, the drive could help promote the technical expertise of the remaining manufacturing workers, as well as those employed in designing, building, and servicing these manufacturing machines.

The scale of this robot revolution could be enormous. Two years ago China became the world’s largest importer of robots, and the International Federation of Robotics, an industry group, estimates that China will account for more than a third of all industrial robots installed worldwide by 2018. Yet the number of robots per worker in China is far lower than in many industrially advanced countries, indicating a huge potential for growth.