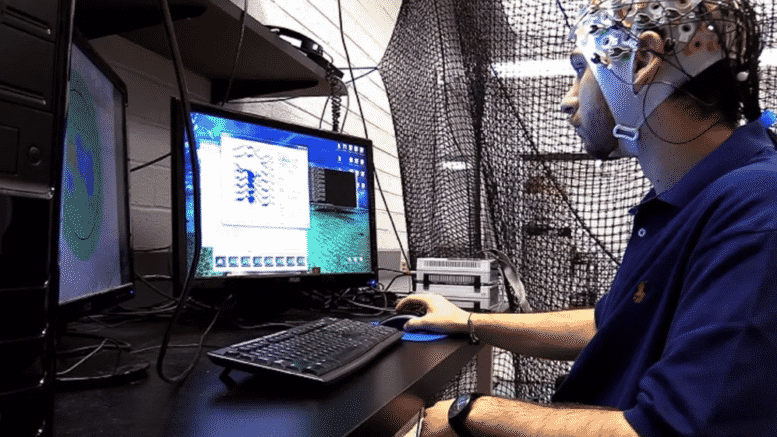 DARPA is the research arm of the US military establishment, and is charged with developing advanced technology that would result in total domination of the battlefield. Unfortunately, the military is increasingly turning its attention to American citizens. ⁃ TN Editor

The U.S. Defense Advanced Research Projects Agency has tested an implant that allows an operator to simultaneously control, with their mere thoughts, up to three unmanned aerial vehicles.

The technology could one day lead to a direct interface between human beings and UAVs.

But full mind-control for drones is still a long way off. Loosely controlling one small UAV is one thing. Directly controlling several sophisticated drones, with full two-way communication, is quite another.

The mind-control trials took place in Pittsburgh between June 2016 and January 2017, according to DARPA. Using what the agency called a “bidirectional neural interface,” a volunteer named Nathan Copeland was able to simultaneously steer a simulated lead UAV and maintain formation of two additional simulated aircraft in a flight simulator, said Tim Kilbride, a DARPA spokesperson.

Copeland, who is partially paralyzed, never actually steered a real drone using only his thoughts. Instead, he channeled his thoughts through a medical implant embedded in his skull, which used electroencephalogram, or EEG, to interface with a computer simulation of a drone navigating an obstacle course, all while two robotic wingmen trailed behind it.

DARPA’s tech translates specific thoughts into code that a drone can understand. The drone in turn can scan its environment, detect an obstacle and alert the operator. The operator’s brain translates the drone’s return signal as a “haptic response.” In other words, a strong feeling.

With today’s tech it’s only possible for a user to vaguely communicate with one drone at a time. And that’s not the tech’s only problem.

“The big challenge is you’re talking about interfacing with the human brain—that’s not a trivial thing,” said Bradley Greger, a neural engineer at Arizona State University. “It’s a big deal to implant something into the brain.”

DARPA is trying to minimize that risk. In February 2016 the agency announced the first successful tests, on animals, of a tiny sensor that travels through blood vessels, lodges in the brain and records neural activity.

The so-called “stentrode,” a combination stent and electrode, could help researchers solve one of the most vexing problems with human-drone interfacing. How to insert a transmitter into someone’s brain without also drilling a hole in their head.