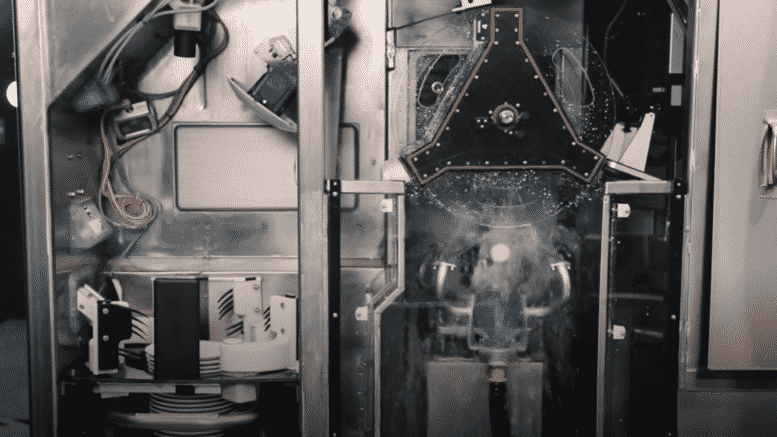 Please Share This Story!
PDF 📄
At least 500,000 people are employed as dishwashers in America, providing the lowest income workforce a place to survive. The Technocrat mind has no concern for the social or human impact of their inventions. ⁃ TN Editor

More than half a million people work as dishwashers in the United States today, according to the most recent data from the Department of Labor. But that’s not nearly enough hands to keep cookware clean in the 660,755 establishments counted by the 2018 NPD Group Restaurant Consensus.

CEO and founder Linda Pouliot said that to figure out what tech could really do to help, she and CTO Paul Birkmeyer went to restaurants of every kind, volunteering to wash their dishes. Restaurateurs and managers were more than welcoming.

The co-founders discovered that work in the dish room is the same as it has been for decades — repetitive, frantic and physically punishing.

In a typical setup, it’s easy for a dishwasher to break a dish, get burned or slip and fall on the wet floor, Birkmeyer noticed. And at work it’s tempting for dishwashers to just put a rubber band on the overhead sprayers to keep hot water running all day, so they won’t have to keep reaching and grasping. Those conditions drive attrition.

“We found the problem is universal. It didn’t matter if you were the French Laundry, a hospital cafeteria or Chili’s; everyone is having a hard time hiring dishwashers,” Pouliot said.

Some restaurants turn to disposables or just deal with the expense of constant recruiting. But Dishcraft wants to give them a more sustainable, less costly option.

At the dish drop, diners or bussers place dirty bowls and plates into a container that stacks and keeps track of them. When a rack is full, a light calls for a dish-room worker to roll it over to the robotic dishwasher, which loads them up automatically.

The washer picks up the plates and bowls with a magnet, cleans them with a rubber scraping wheel and rinses them with gray water (recycled water safe for cleaning purposes). Dishcraft’s robotic washer uses cameras, sensors and “dirt identification algorithms” to find and clean every last spot of food, even those that would be invisible to the naked eye.

Once they are washed, the machine stacks the plates and bowls into racks. A worker then places those racks in a sanitizer, standard equipment already used in commercial kitchens today. The sanitizer heats up the dishes, killing any remaining germs.

Restaurants love the system because “Robots do not call off, robots don’t take breaks, and robots do not take vacation,” Pouliot said.

While Dishcraft is focused on installations in high-volume cafeterias today, it has a way to help smaller restaurants, too.

According to Steve Anderson, founder of Baseline VC and early investor in Dishcraft, the company will swap clean cookware for dirty at select restaurants at the end of each meal or day, much like a laundry service.

Dishcraft systems work only with the plates and bowls that the company makes and sells today. They are hard to break, easy to transport and have metal pieces affixed to the bottom so they are easily grasped by the robotic dishwasher.

Sounds VERY convoluted and not a well designed machine. The purchaser still has to have an employee clear the food from the plates. Another employee has to load them into the machine and the food seller must make an upfront investment in specially designed dishes to fit into the machine. And, of course, the ‘special’ dishes are a repetitive revenue stream for the source company. Sounds like a new drawing board is called for here. Food businesses are not purchasing a robotic dish-washing machine that operates so well it’s like having a real human in your kitchen. This machine sounds… Read more »