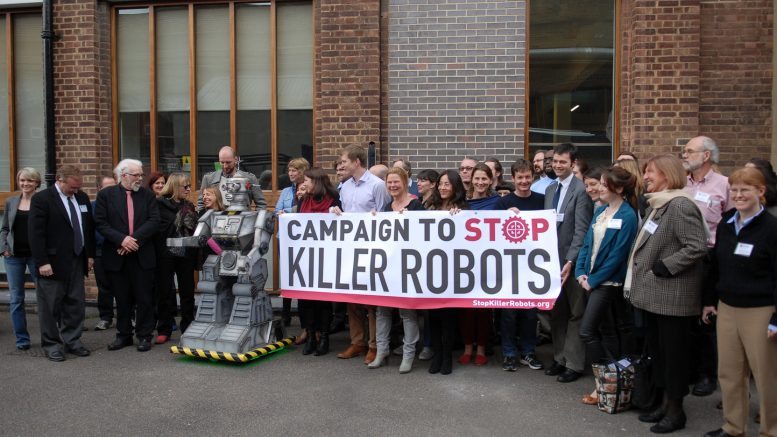 Does Musk and friends know something we don’t know? The appeal to ban killer robots implies that they are already being built. Technocrats build because they can, not because they ever asked why they should build something. ⁃ TN Editor

Some of the world’s leading robotics and artificial intelligence pioneers are calling on the United Nations to ban the development and use of killer robots.

Tesla’s Elon Musk and Google’s Mustafa Suleyman are leading a group of 116 specialists from across 26 countries who are calling for the ban on autonomous weapons.

The UN recently voted to begin formal discussions on such weapons which include drones, tanks and automated machine guns. Ahead of this, the group of founders of AI and robotics companies have sent an open letter to the UN calling for it to prevent the arms race that is currently under way for killer robots.

In their letter, the founders warn the review conference of the convention on conventional weapons that this arms race threatens to usher in the “third revolution in warfare” after gunpowder and nuclear arms.

The founders wrote: “Once developed, lethal autonomous weapons will permit armed conflict to be fought at a scale greater than ever, and at timescales faster than humans can comprehend. These can be weapons of terror, weapons that despots and terrorists use against innocent populations, and weapons hacked to behave in undesirable ways.

“We do not have long to act. Once this Pandora’s box is opened, it will be hard to close.”

Experts have previously warned that AI technology has reached a point where the deployment of autonomous weapons is feasible within years, rather than decades. While AI can be used to make the battlefield a safer place for military personnel, experts fear that offensive weapons that operate on their own would lower the threshold of going to battle and result in greater loss of human life.

The letter, launching at the opening of the International Joint Conference on Artificial Intelligence (IJCAI) in Melbourne on Monday, has the backing of high-profile figures in the robotics field and strongly stresses the need for urgent action, after the UN was forced to delay a meeting that was due to start Monday to review the issue.

The founders call for “morally wrong” lethal autonomous weapons systems to be added to the list of weapons banned under the UN’s convention on certain conventional weapons (CCW) brought into force in 1983, which includes chemical and intentionally blinding laser weapons.