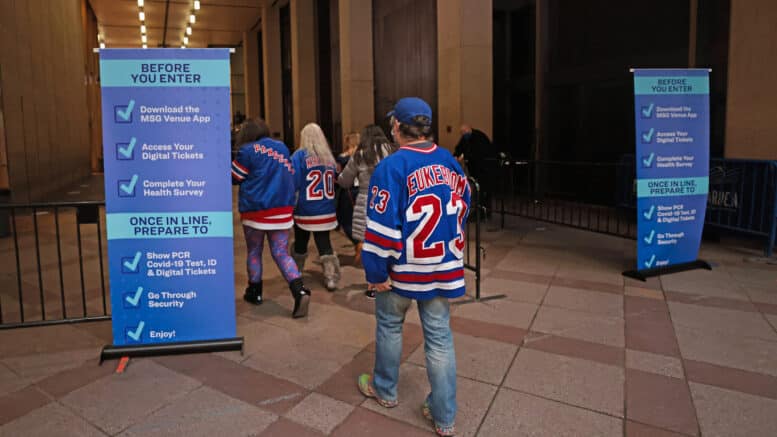 Fans are welcomed back to the arena for the game between the New York Rangers and the Boston Bruins at Madison Square Garden in New York on Feb. 26, 2021. Approximately 2,000 fans are expected to attend the game which is the first since state guidelines have allowed for fans since the start of the coronavirus pandemic. (Bruce Bennett/Pool Photo via AP)

Please Share This Story!
PDF 📄
Gene therapy maker Moderna’s broader ambitions are seen in this partnership with IBM to create a digital health pass to track vaccine delivery, administration and all surrounding events. Technocrats are committed to track everything, everywhere at all times. ⁃ TN Editor

IBM is partnering with Covid-19 mRNA vaccine maker Moderna to track vaccine administration in real time through its various blockchain, Artificial Intelligence, and hybrid cloud services. According to a company press release, the collaboration will “focus on exploring the utility of IBM capabilities in the U.S.,” such as a recently unveiled pilot program for a Covid-19 Digital Health Pass in the State of New York, which effectively deputizes private businesses to enforce government-imposed Covid-19 regulations.

New York Governor Andrew Cuomo announced the initiative, billed as the “Excelsior Pass,”  during his 2021 State of the State Address in January and the program’s initial phase was tested at the Barclays Center during an NBA game, followed by another test at Madison Square Garden for an NHL game on March 2.

According to the state’s official website, the trial runs were designed to maximize “return on investment and saving development time” before submitting the “wallet app” to the Google and Apple app stores.

“The Excelsior Pass will play a critical role in getting information to venues and sites in a secure and streamlined way,” said Cuomo, who in February rolled out the state’s reopening guidelines for sports and entertainment venues, which would pave the way “to fast-track the reopening of these businesses and getting us one step closer to reaching a new normal (emphasis added).”

Built on IBM’s Digital Health Pass technology, the QR code-based health data tracking app is only one of multiple blockchain ledger applications the company will leverage as part of its partnership with Moderna. Others include their Blockchain Transparent Supply and Food Trust services, which use the open-source Hyperledger technology to share supply-chain and food sourcing “credibility” data respectively with enterprise customers.

Using what have already become clichéd industry buzzwords like “transparency,” “trust,” and even “privacy,” IBM’s Digital Health Pass marketing literature describes the mass tracking app as a “smart way to return to society” that allows people to “return to the activities and things they love.”

Still in the “voluntary” stages of use, according to IBM’s Steve LaFleche, the Digital Health Pass and similar mobile health verification apps, like CommonPass, cease to be so once government guidelines and regulations force the private sector to enforce their implementation, as in the case of New York’s reopening rules for stadiums, theaters and other venues.

In addition to the already widely-enforced capacity limits, social distancing and mandated facial coverings, Cuomo’s guidelines for venue operation now include the requirement that “all staff and spectators receive a negative COVID-19 PCR test within 72 hours of the event,” as well as the collection of contact information of everyone in attendance in order to “inform contact tracing efforts.”

IBM’s partnership with Moderna allows many of these requirements to be carried out unobtrusively and with minimal fuss for the general population, who are by now used to interfacing with the world on their smartphones. As LaFleche writes, the app “can interoperate easily with other solutions so that people won’t have to rely on multiple apps when going about their daily lives.”

Tethered to the blockchain

The development of these health-tracking, blockchain-based technologies as part of a broader redesign of supply chain and capital organization structures — often referred to as the “new normal” or the “Great Reset — has been in the works since at least 2016. It began with the “Use of Blockchain in Health IT and Health-related Research Challenge,” co-hosted by the Office of the National Coordinator for Health IT (ONC) and the National Institute of Standards and Technology (NIST), where IBM submitted its white paper, “Blockchain: The Chain of Trust and its Potential to Transform Healthcare – Our Point of View.”

Since April 2020, these efforts have sped up considerably through initiatives like the COVID-19 High Performance Computing (HPC) Consortium, a Public-Private Partnership (PPP) “spearheaded” by IBM and the White House Office of Science and Technology Policy, which brought Big Tech players like Google, Amazon, and Microsoft together with academic institutions and federal agencies to apply an “unprecedented scale of computing power to support COVID-19 research.”

The PPP applied its “unprecedented” computing power to controversial research topics like the supposed genetic predisposition among African Americans to Covid-19 infection and other areas of focus, such as potential treatments and “medicinal plants,” which can now all be integrated as part of IBM’s blockchain-based applications across the entire economic spectrum.

As covered by MintPress in a recent three-part series by this author, the intersection between blockchain technology and health data is at the center of a global campaign to recreate capitalism as a data-driven economic model based on a so-called “impact investment” paradigm, which purports to solve the world’s health, social and environmental problems through market-based solutions.

“Hacking the software of life”

The collection of our genomic data lies at the core of the fraudulent concept of creating financial incentives around human misery. DNA is the single point of data convergence across humanity that allows for these new “moral” economic models to generate enough volume to replicate present-day economies of scale and design financial instruments to exploit human beings at a cellular level.

Moderna’s former Chief Medical Officer, Tal Zacks, is well aware of the opportunities. On February 25, Moderna announced their CMO’s intention to step down in September as he looks forward to the “next leg of his career.” Zacks will leave a wealthy man, after regularly selling Moderna stock over the course of 2020, making him approximately $1 million a week, according to SEC filings.

In 2017, Zacks delivered a TED Talk in which he plainly states what many of the mRNA vaccine detractors have been warning about. Namely, that these novel vaccination technologies are, in fact, mechanisms designed to manipulate the human genetic code.

Zacks mirrors much of what his colleague and fellow vaccine credential promoter, Dr. Brad Perkins, said in a similar presentation that same year, in which he expounded on the massive potential for profits of these kinds of technologies — and the collection of genomic data, in particular — across the healthcare and insurance industries.

“I’m here today to tell you,” Zacks informed the spectators, “that we’re actually hacking the software of life.” Aiming at a more general audience, Zacks wasn’t as forward as Perkins in his description of the implications, limiting himself to emotional appeals through anecdotal accounts of former patients who might have been saved had they lived through the “phenomenal digital and scientific revolution” of mRNA “information therapy” solutions from which he has profited so handsomely.

Conveniently, IBM’s strong presence in the law enforcement space, as one of the largest providers of digital profiling technologies and AI policing systems in the world, may also help with any obstacles Moderna may face among vaccine-hesitant populations — such as the 3,000 Romanians who took to the streets of Bucharest to protest mass vaccinations, or the refusal of entire communities in Mexico to have their personal sovereignty violated by the world’s newest crop of snake oil salesmen.

I’d reject the IMB/Maderno idea of this tracking device., Screw you Cuomo!!!!
When is IBM going to come clean about all the money it made off its tracking and identification cards they supplied that the Nazis used to track all the people they murdered?

They conspired to create the digital health pass

And why not IBM! When they are the ones who helped Hitler in Germany. Not only this it has been reported that the invention of the copy machine was given by a demon. From wikipedia: Watson was awarded ‘The order of the German Eagle’ by Hitler for his part. “Dealings with Nazi Germany before World War IIWatson’s merger of diplomacy and business was not always lauded. In 1937, he met Adolf Hitler since the former was as President of the International Chamber of Commerce.[14][15] During the 1930s, IBM’s German subsidiary was its most profitable foreign operation, and a 2001 book by Edwin Black, IBM… Read more »