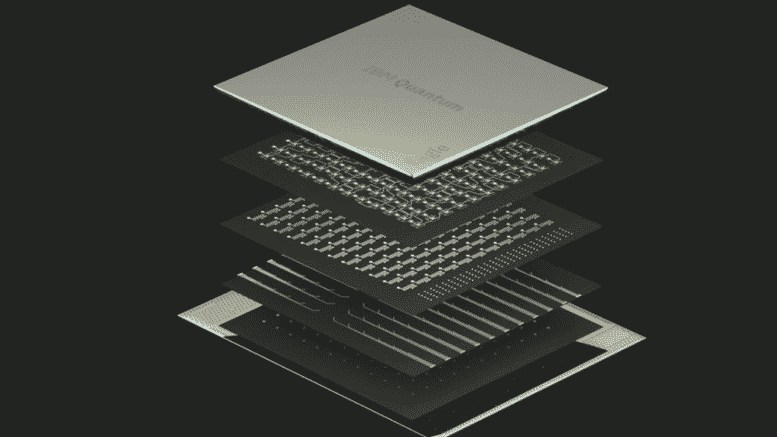 Please Share This Story!
PDF 📄
The power of quantum computing, based on quantum physics, is simply beyond comprehension. IBM’s new 127-qubit processor offers a comparison for perspective: “the number of classical bits necessary to represent a state on the 127-qubit processor exceeds the total number of atoms in the more than 7.5 billion people alive today.” ⁃ TN Editor

IBM today announced its new 127-quantum bit (qubit) ‘Eagle’ processor at the IBM Quantum Summit 2021, its annual event to showcase milestones in quantum hardware, software, and the growth of the quantum ecosystem. The ‘Eagle’ processor is a breakthrough in tapping into the massive computing potential of devices based on quantum physics. It heralds the point in hardware development where quantum circuits cannot be reliably simulated exactly on a classical computer. IBM also previewed plans for IBM Quantum System Two, the next generation of quantum systems.

IBM recently debuted detailed roadmaps for quantum computing, including a path for scaling quantum hardware to enable complex quantum circuits to reach Quantum Advantage, the point at which quantum systems can meaningfully outperform their classical counterpoints. Eagle is the latest step along this scaling path.

‘Eagle’ is IBM’s first quantum processor developed and deployed to contain more than 100 operational and connected qubits. It follows IBM’s 65-qubit ‘Hummingbird’ processor unveiled in 2020 and the 27-qubit ‘Falcon’ processor unveiled in 2019. To achieve this breakthrough, IBM researchers built on innovations pioneered within its existing quantum processors, such as a qubit arrangement design to reduce errors and an architecture to reduce the number of necessary components. The new techniques leveraged within Eagle place control wiring on multiple physical levels within the processor while keeping the qubits on a single layer, which enables a significant increase in qubits.

The increased qubit count will allow users to explore problems at a new level of complexity when undertaking experiments and running applications, such as optimizing machine learning or modeling new molecules and materials for use in areas spanning from the energy industry to the drug discovery process. ‘Eagle’ is the first IBM quantum processor whose scale makes it impossible for a classical computer to reliably simulate. In fact, the number of classical bits necessary to represent a state on the 127-qubit processor exceeds the total number of atoms in the more than 7.5 billion people alive today.

“The arrival of the ‘Eagle’ processor is a major step towards the day when quantum computers can outperform classical computers for useful applications,” said Dr. Darío Gil, Senior Vice President, IBM and Director of Research. “Quantum computing has the power to transform nearly every sector and help us tackle the biggest problems of our time. This is why IBM continues to rapidly innovate quantum hardware and software design, building ways for quantum and classical workloads to empower each other, and create a global ecosystem that is imperative to the growth of a quantum industry.”

The first ‘Eagle’ processor is available as an exploratory device on the IBM Cloud to select members of the IBM Quantum Network.

For a more technical description of the ‘Eagle’ processor, read this blog.

In 2019, IBM unveiled IBM Quantum System One, the world’s first integrated quantum computing system. Since then, IBM has deployed these systems as the foundation of its cloud-based IBM Quantum services in the United States, as well as in Germany for Fraunhofer-Gesellschaft, Germany’s leading scientific research institution, in Japan for the University of Tokyo, and a forthcoming system in the U.S. at Cleveland Clinic. In addition, we announced today a new partnership with Yonsei University in Seoul, South Korea, to deploy the first IBM quantum system in the country. For more details, click here.

“IBM Quantum System Two offers a glimpse into the future quantum computing datacenter, where modularity and flexibility of system infrastructure will be key towards continued scaling,” said Dr. Jay Gambetta, IBM Fellow and VP of Quantum Computing. “System Two draws on IBM’s long heritage in both quantum and classical computing, bringing in new innovations at every level of the technology stack.”

Central to IBM Quantum System Two is the concept of modularity. As IBM progresses along its hardware roadmap and builds processors with larger qubit counts, it is vital that the control hardware has the flexibility and resources necessary to scale. These resources include control electronics, which allow users to manipulate the qubits, and cryogenic cooling, which keeps the qubits at a temperature low enough for their quantum properties to manifest.

In addition, the new design brings the possibility to provide a larger shared cryogenic work-space – ultimately leading to the potential linking of multiple quantum processors. The prototype IBM Quantum System Two is expected to be up and running in 2023.

A computer operating at subatomic levels, tell me how?, who invented this and I’ll show you a alien. First we have to see what this will do in reality and not just a bunch of tech nerds spouting their fairy tails. It sounds to good to be true and to powerful if brought to fruition to let any human being play with it. What I learned is maybe 25% of the shit NASA or other computer geek worlds like IBM are accurate… the hype is huge so too late put on your be-

justsayin
Reply to  Brett A Gleason

“who invented this and I’ll show you a alien’. No, it was completely demonically inspired. People really do not understand that we have unseen enemies. Demons are working with men to destroy, to deceive, and to keep men from belief in the Only One True God of the Bible.

Maybe they can finally solve my Chess position here? If you subscribe to the Deep State breakaway civilization theory the powers of this world already have technology beyond your wildest dreams, i.e. time machines, weather control, space fleets, bases on other planets, underground bases, interdimensional travel, etc. all rely on quantum computing. Quantum tunneling as currently described in a semiconductor inevtiably leads to physical destruction of the lattice structure and is not understood. We know alpha particle has quantum tunneling because its wavefunction is impossible to escape the nucleus. If you have potential well you can have three state or… Read more »

if this is based on the quantum computing models i have seen – then it is no different than reverse engineering, but reverse engineering to outcome. i need x outcome – how many states get me to outcome. how many states are needed to get to the states right before outcome, etc. then what inputs do i need to get to the state before the state before the sate of my stated outcome – another form of classic manipulation.