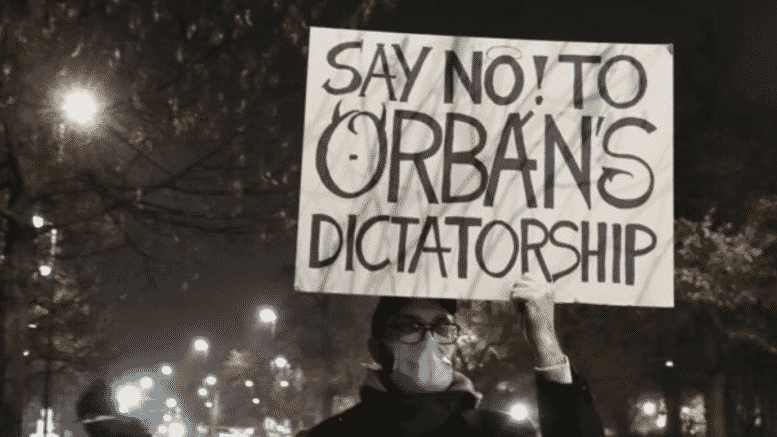 Please Share This Story!
PDF 📄
The race toward global authoritarianism is a manifestation of advances of Technocracy and especially with the pandemic. Democracy is “fragile” because Technocrats are killing it with a thousand cuts. ⁃ TN Editor

Here’s some of what happened while the world was distracted by the coronavirus: Hungary banned the public depiction of homosexuality. China shut Hong Kong’s last pro-democracy newspaper. Brazil’s government extolled dictatorship. And Belarus hijacked a passenger plane to arrest a journalist.

COVID-19 has absorbed the world’s energies and isolated countries from one another, which may have accelerated the creep of authoritarianism and extremism across the globe, some researchers and activists believe.

“COVID is a dictator’s dream opportunity,” said Theary Seng, a Cambodian-American human rights lawyer who has been indicted on charges including treason in the ostensibly democratic southeast Asian nation, where Prime Minister Hun Sen has been in power for more than three decades.

Human Rights Watch accuses Cambodia’s government of using the pandemic as cover to imprison political opponents without due process. Scores have been indicted and face mass trials.

When it comes to government opposition, “the fear of COVID, on its own and as a political weapon, has substantially restricted mobility for a gathering or movement to take shape,” Seng said.

The biggest global public health emergency in a century has handed power to government authorities and restricted life for billions of people.

Luke Cooper, a London School of Economics researcher and author of the book “Authoritarian Contagion,” said the vast economic, health and social resources poured into fighting the pandemic mean “the state is back as a force to manage society and to deliver public goods.”

Restrictions on civil liberties or political opponents have been stepped up during the pandemic on several continents.

For a decade in Hungary, conservative nationalist Prime Minister Viktor Orban has curtailed media and judicial freedom, criticized multiculturalism and attacked Muslim migrants as a threat to Europe’s Christian identity.

During the pandemic, Orban’s government brought in an emergency powers bill allowing it to implement resolutions without parliamentary approval — effectively a license to rule by decree. In June, it passed a law prohibiting the sharing of content portraying homosexuality or sex reassignment with anyone under 18. The government claims the purpose is to protect children from pedophiles, but it effectively outlawed discussion of sexual orientation and gender identity in schools and the media.

Poland’s conservative government has chipped away at the rights of women and gay people. A ruling last year by a government-controlled court that imposed a near-total ban on abortion triggered a wave of protests that defied a ban on mass gatherings during the virus outbreak.

In India, the world’s biggest democracy, populist Prime Minister Narendra Modi has been accused of trying to silence voices critical of his administration’s response to a brutal pandemic wave that tore through the country in April and May. His government has arrested journalists and ordered Twitter to remove posts that criticized its handling of the outbreak after introducing sweeping regulations that give it more power to police online content.

Even before the pandemic, Modi’s ruling Hindu nationalist Bharatiya Janata Party was accused by opponents of squashing dissent and introducing policies aimed at refashioning a multifaith democracy into a Hindu nation that discriminates against Muslims and other minorities.

In Russia, the government of President Vladimir Putin has used the pandemic as its latest excuse to arrest opposition figures. Associates of jailed opposition figure Alexei Navalny have been subjected to house arrest and charges that the mass protests against his arrest violated regulations on mass gatherings.

In neighboring Belarus, authoritarian President Alexander Lukashenko extended his quarter-century iron grip on power by winning an August 2020 election that the opposition — and many Western countries — said was rigged. The huge protests that erupted were met with tear gas, rubber bullets and mass arrests.

Then, in May, a Ryanair plane flying from Athens to Vilnius was forced to land in the Belarusian capital of Minsk after the crew was told of an alleged threat. Opposition journalist Raman Pratasevic, a passenger, was taken off the plane along with his girlfriend and arrested.

Western nations called the forced diversion a brazen hijacking and slapped sanctions on Belarus, but those seem unlikely to induce Lukashenko to change his ways and underscore the weakness of democracies in confronting hardline regimes. Hungary’s acts have drawn sharp words from fellow European Union leaders, but the 27-nation bloc has no unified response to restrictive regimes like those in Hungary or Poland.

Even before COVID-19 came along, extremism was on the march.

“Over the last 15 years, authoritarian politics has replicated all over the world,” Cooper said. “Democracy feels very fragile. Democracy doesn’t have a clear vision for what it’s trying to do in the 21st century.”

Funniest part In article – india the largest democracy!
If its a democracy, how come there is a term indian fascism? That has the strictest cast system, other governments dream of implementing in their own countries!

This are the WHO guidelines for sex education in the EU …
The MSM in Europ has twisted the narratieve in to ” Orban is against homosexuals ”
Check this out.
https://summier.news/2020/04/29/who-guidelines-encourage-children-younger-than-4-be-taugt-masturbation-and-gender-identity/
On this page , you can downlode the WHO pdf.

Patrick, this a most curious post. IMHO, it is Agitprop favoring the agenda of the Global Oligarchs. Cleverly written, no doubt. In poses as “opposition” to authoritarian regimes. Ahhhhh, pretty sure Brazil would be leading the World economically for the middle class businesses if Bolsanaro’s freedom initiatives had not been stymied. Hmmm Florida? What Desantis accomplished is what Bolsanaro was pushing but he got crushed by the stooges in robes. I personally witnessed several huge protests in Brazil of the lockdowns that destroyed the wealth of the middle and lower classes. Businesses destroyed. Not very nice. Protests wanting the vaxx?… Read more »

I agree with much of this.
I expect my children to learn at school how to progress in life’s useful subjects like Maths, languages, philosophy, music, drama, correct history, not made up rubbish, and especially how to tespect othets and play kindly with their peers…stuff like that. Certainly Not sex, religion or politics. They don’t need that till they’re young adults.

Michael Yeadon Former Vice President and Chief Scientific Advisor of Pfizer (for 16 years). Qualified life-science researcher. First degree in bio-chemistry and toxicology. Holds a research-based PhD in respiratory pharmacology. Worked for 32 years in big pharmaceutical companies. Worked for 10 years in the bio-tech sector. Founded, grew and sold a biotech company. Subsequently he was technical advisor to more than 30 start up bio-tech companies. Michael Yeadon states categorically the following:- Masks don’t work. Lockdowns don’t work – all previous quarantines in history for infectious diseases have been aimed at the sick, and not the well (as is currently… Read more »

On SARS-Cov-2 Patents This presentation by David Martin, the foremost patents researcher in the world. He follows the trail of patents which were issued for Sars-CoVi-2 (Covid-19) gene sequences years before the pandemic began. The trail also leads to pre-Covid patents for components of anti-Covid ‘vaccines’, patents that were obtained by individuals and companies now demanding universal vaccinations. The only possible motive for creating a disease and then forcing everyone to accept vaccines made by the same people who invented the disease is – pardon the pun – to make a killing. It is not necessary for the disease to… Read more »