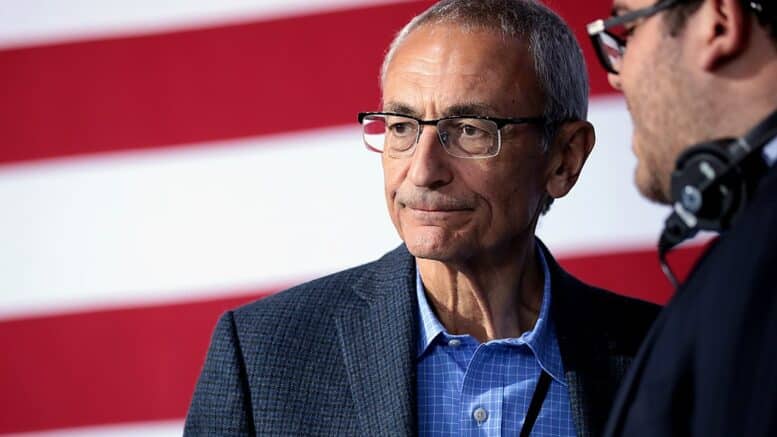 Please Share This Story!
PDF 📄
John Podesta, a consummate Technocrat and former member of the Trilateral Commission, played the role of Joe Biden in a strategy exercise to determine what leftists will do if Trump is re-elected. The outcome resembles a scorched-earth policy. ⁃ TN Editor

Democrats are prepared to burn the country to the ground rather than accept another loss to President Trump in November and are war-gaming doomsday scenarios in advance of the most important election in American history.

The party is already laying the groundwork with media and operatives spreading the idea that the winner will not be known on election night or possibly for months as their army of ruthless lawyers will challenge votes in any state won by Trump.

Failed Georgia gubernatorial candidate Stacey Abrams is “warning” voters not to expect to know who will occupy the White House on November 3rd due to mail-in voting but a New York Times story is much more ominous.

The bulk of the story by former BuzzFeed reporter Ben Smith who is notorious for being the first one to publish the lurid Steele dossier lays out the rationale for delayed results but also reveals that a group of influential Dems have been wargaming scenarios for what comes after.

The group of which creepy former Hillary Clinton campaign manager John Podesta is a member (he role-played Joe Biden) is preparing for outcomes that would end America as it has existed and include civil war and the secession of the entire west coast from the U.S.

Democrats are contemplating secession and potential civil war as they game out possible scenarios for a closely contested election, according to a report by Ben Smith in a New York Times column Sunday.

The bulk of Smith’s column is devoted to the question of how the media will handle Election Night coverage, given that the result may not be known for weeks. Vote-by-mail, which many states have only recently adopted — ostensibly, to prevent the spread of coronavirus in polling places — could lead to an uncertain result.

However, buried near the end of Smith’s column is a report that Democrats have participated in a “war game” in which they considered several possible outcomes of the election.

In one scenario, John Podesta — the former chair of Hillary Clinton’s presidential campaign, and a leading figure in party circles — played former Vice President Joe Biden, and refused to concede the election.

The result: the threat of secession by the entire West Coast, followed by the possible intervention of the U.S. armed forces:

But conveniently, a group of former top government officials called the Transition Integrity Project actually gamed four possible scenarios, including one that doesn’t look that different from 2016: a big popular win for Mr. Biden, and a narrow electoral defeat, presumably reached after weeks of counting the votes in Pennsylvania. For their war game, they cast John Podesta, who was Hillary Clinton’s campaign chairman, in the role of Mr. Biden. They expected him, when the votes came in, to concede, just as Mrs. Clinton had.

But Mr. Podesta, playing Mr. Biden, shocked the organizers by saying he felt his party wouldn’t let him concede. Alleging voter suppression, he persuaded the governors of Wisconsin and Michigan to send pro-Biden electors to the Electoral College.

In that scenario, California, Oregon, and Washington then threatened to secede from the United States if Mr. Trump took office as planned. The House named Mr. Biden president; the Senate and White House stuck with Mr. Trump. At that point in the scenario, the nation stopped looking to the media for cues, and waited to see what the military would do.

There was a very good reason why, in years gone by, communists were NOT permitted to run for office as a Member of Parliament in Britain. It was because communist candidates did not promise to look after or represent the people in their own electorate if elected, they refused to acknowledge even the basis of national government and national sovereignty – and in fact it was clear that their principle objective was to ‘use any means possible’ to facilitate the destruction of their own nation state and to then submerge it beneath a criminal, global dictatorship. That was in the… Read more »

John Podesta is Roman Catholic, and there is a reason Roman Catholic’s were not to be in high office in America, though Kennedy was the first. Now they are everywhere in government and you could say that the hierarchy of Roman Catholicism is communist to the core. They have ruined every country they have take over, just look at Mexico and go back further to the dark ages. 600AD-1517AD
I further want to add that the players in the game of Covid are all Jesuit Roman Catholic.

I’m curious if one of the scenarios included the temporary installation of the speaker of the house as acting President based on exceeding the time limit imposed by the Constitution regarding selection of the winner? How would that play out?

WHY IS THIS CHILD FORNICATOR NOT IN PRISON??

I’m a political but am intelligent enough to know that if the Democrats would have put up Bernie Sanders, they wouldn’t have anything to worry about right now. Not only would Democrats voted for Bernie, but also a lot of Republicans. The entire system is a scam anyways, and until we learn collectively to think for ourselves, take self responsibility, and collectively come together as one it will never change. Put your boots on boys and girls it’s about to go down! #truth