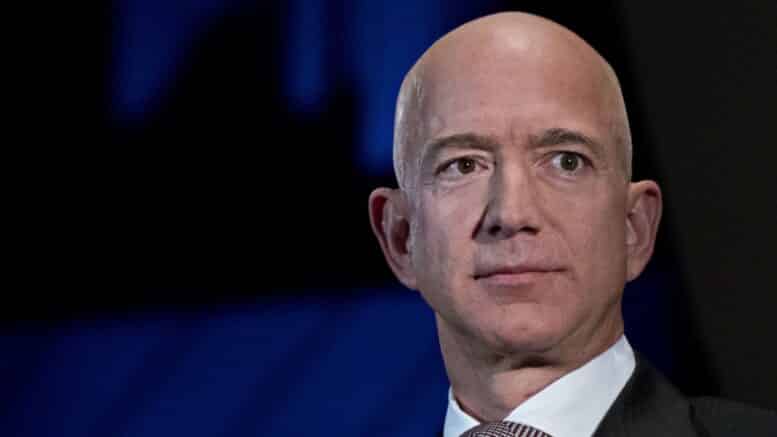 Please Share This Story!
PDF 📄
First Elon Musk, now Jeff Bezos. Both ultra-rich Technocrats are competing to see who can be first to fill space with 5G satellites. For the “good of humanity”, of course. Once their networks are completed, 100 percent of earth will have broadband access while being continuously bathed in 5G radiation. ⁃ TN Editor

Amazon is getting serious about space business. Coming shortly after Amazon Web Service’s announcement last month to set up a new business unit dedicated to accelerating innovation in the global aerospace and satellite industry, it has now announced its intention to invest $10 billion for launching a low earth orbit (LEO) satellite constellation called Project Kupier to eliminate Internet dark spots, specifically in the US.

The US Federal Communications Commission (FCC) last week unanimously voted in favor of Amazon’s application to deploy and operate its constellation of 3,236 satellites.

With this announcement, Jeff Bezos is seen directly taking on Elon Musk in an effort to beam high-speed internet from networks of thousands of satellites in the LEO. Starlink is Musk’s pet project to deliver high speed broadband Internet to locations where access has been unreliable, expensive, or completely unavailable. It has so far sent 500+ satellites in orbit with the latest batch of 60 launched in April this year, and 12,000 planned in the long run. Starlink, which is estimated to cost SpaceX $10 billion, is targeting service in the Northern US and Canada in 2020, rapidly expanding to near global coverage of the populated world by 2021. In February this year, SpaceX President Gwen Shotwell had talked about spinning off Starlink into a separet company and go the IPO route in the coming years.

London-based OneWeb, which was recently acquired by UK government and India’s Bharti Airtel, after it filed for bankruptcy protection in March, also had plans to launch satellite-based Internet services, and had already sent 64 satellites into orbit which it continues to maintain.

But more about Kuiper. The satellites will be positioned in LEO between 590 and 630 km above the Earth’s surface. Amazon has six years to launch the first half and nine years for the rest though precise launch dates are yet to be determined. The satellites will be designed and tested at Amazon’s new research and development facility opening in Redmond, Washington.

The service will deployed in five phases and service will begin once the first 578 satellites are launched, according to the FCC report.

“We conclude that the grant of the Kuiper application will serve the public interest, subject to the requirements and conditions specified herein. The broadband services Kuiper proposes to provide will benefit American consumers,” the FCC wrote in its July 30 order. However, upon finalization of its design and prior to initiation of service, Amazon must seek FCC’s approval for a modification containing an updated description of the orbital debris mitigation plans for its system.

I guess it means the FCC folks, (surprise surprise!) could be bought.

Musk & Bezos aren’t doing anything. They’re just figure heads carrying out ‘the deeds’ of their Globalist Masters. All while using Tax Payer $$$$!!! HOW did these 2 get filthy rich?? They were GIVEN Tax Payer $$$!!

Really? The MURDER of the American people by the RADIATION from 5G, and the ELECTROMAGNETIC WAVES. Ramping up the power and speed to DEPOPULATE the people of the Earth to 500 MILLION.