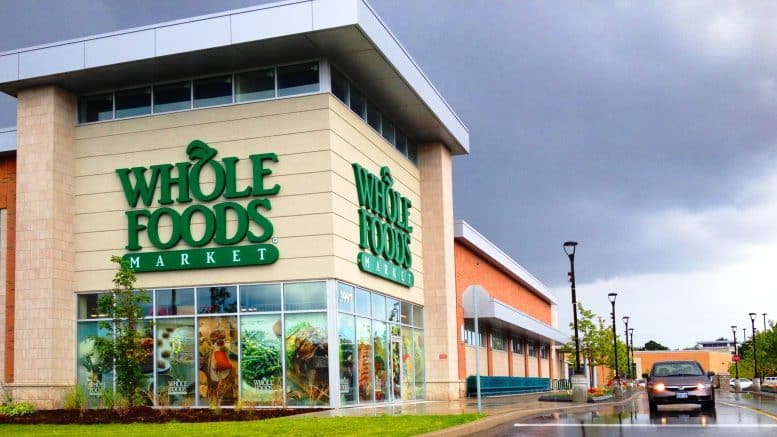 Please Share This Story!
PDF 📄
Technocrats at Amazon continue to push cashier-less stores, first with Amazon-Go and now with its subsidiary, Whole Foods. Cashiers do not make up the largest portion of grocery employees, but they will eventually be missing from many stores as this trend continues, and the use of cash will diminish, forcing people to pay with smart phone apps. ⁃ TN Editor

There will be something missing at two Whole Foods stores opening next year: the rows of cashiers.

Amazon, which owns the grocery chain, said Wednesday that it will bring its cashier-less technology to two Whole Foods stores for the first time, letting shoppers grab what they need and leave without having to open their wallets. Cameras and sensors track what’s taken off shelves. Items are charged to an Amazon account after customers leave the store with them.

But there will be an option for those who want to shop the old-fashioned way: Self-checkout lanes will be available that take cash, gift cards and other types of payment.

Amazon first unveiled the cashier-less technology in 2018 at an Amazon Go convenience store and has expanded it to larger Amazon supermarkets. But it will be the first time it has appeared at Whole Foods, a chain of more than 500 grocery stores Amazon bought four years ago.

One of the new stores will be in Washington, D.C.; the other in Sherman Oaks, California. They will be stocked with the typical Whole Foods fare, including seafood, fresh-squeezed orange juice and organic vegetables.

Individuals have BEEN BEGGING for this (ALL of what’s to come)! It’s REALLY going to be interesting to see how these same individuals act, once the Globalists further implement their Agenda.

I understood that this was the plan from the beginning. So long Whole Foods of the 80’s where I loved to go into the store, visit with people I knew and buy REAL organics.