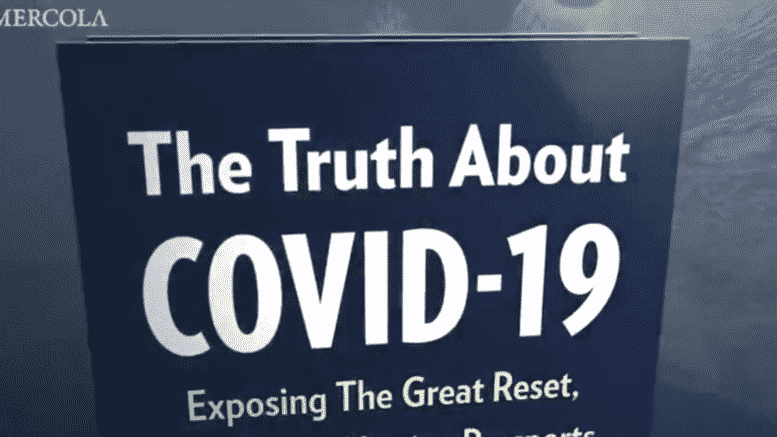 Please Share This Story!
PDF 📄
Censorship is rampant in America and around the world. Mercola’s new book “The Truth About COVID-19” is getting immediate pressure from all quarters, even though it has not been released yet. It can be pre-ordered directly from the publisher. This is Mercola’s personal account. ⁃ TN Editor

In my latest book, “The Truth About COVID-19,” I investigate the origins of the SARS-CoV-2 virus and how the technocratic elite use this pandemic to erode your personal liberty and freedom. I also review strategies that can help protect you against this infection, and what you can do to fight back against the technocratic takeover.

My book won’t be available until April 29, 2021, but is available right now for preorder on Amazon. Not surprisingly, Amazon is now being pressured to ban this book, under the auspice that it might make people rethink their decision to get vaccinated.

While it is less than ideal to ask you to purchase this book from Amazon, the reality is the high rankings you help us achieve creates massive visibility that will help others become familiar with this controversial information.

Australian Sky News1 found Amazon, Waterstones and Foyles all sell what it calls “anti-vaccine” and “COVID conspiracy” books, and vendors are now being urged to pull, block or add some sort of warning label to them.2 As noted by Sky News:3

“In the UK, more than 20 million vaccine doses have been administered as part of efforts to defeat COVID-19, but worries continue that misinformation is stopping some people from having the jab. Shadow health minister Alex Norris told Sky News:

Interestingly, Sky News discovered that a majority of “anti-vaccine” books were published after March 2020, suggesting interest in and sales of these books have increased since the pandemic began.

Sky News points out that many of “anti-vaccine” books — most of which, by the way, are written by licensed and educated health experts — have five-star reviews, and as a category, they are frequently among the Top 10 best sellers in the children’s vaccination category. But public evaluation of the material matters not in this case. A free-thinking public simply cannot be tolerated; freedom of speech must be stopped or labeled with black boxes.

The question that is never answered is, who decides what is “legitimate text,” to use Sky News’ term, and what is “misinformation”? Is there a person alive who is always 100% correct and can make that determination? Or does getting to the truth involve the ability to sift through and balance pros and cons; shades of gray; levels of uncertainty? As Toby Young, general secretary for the Australian Free Speech Union told Sky News:4

“The problem with placing a limit on free speech and saying ‘we’re going to ban people who say or write things that are potentially harmful’ is that that word potentially is quite vague.

If you grant yourself that right, you’re granting yourself the right to ban almost anything. The second [issue] is, who defines what is harmful? We think that there is a scientific consensus around things like the COVID vaccines but actually science is constantly developing and evolving new information is coming to light.”

Sadly, that kind of common sense is not to be tolerated anymore. It’s all about “burning the evidence” at this point, to prevent people from learning anything that might break the one-sided control narrative. As Sky News admits, only 10% of Amazon search results lead to anti-narrative content, thanks to hidden algorithms that suppress certain categories of books.5

It’s hard to imagine that book burning would be accepted in this modern era, but here we are. History repeats itself, and censorship has been a go-to strategy for all authoritarian regimes.

The fact that the press goes along with it, and actually encourages it, tells you just how controlled the world has become. The dictatorial power structure we’re currently facing off against is not a national one; it’s a global phenomenon, centered primarily within nongovernmental organizations and private “philanthropic” foundations that have a stranglehold on mainstream media.

At present, it looks as though efforts to eradicate my book will fail, as preorders are rolling in at a steady pace, but that doesn’t mean they won’t continue trying.

Earlier this month, Dr. Peter Lurie6 — a former U.S. Food and Drug Administration associate commissioner7 and current president of the Center for Science in the Public Interest (CSPI) — bragged8 about his ability to influence the FDA into sending me a warning letter9 for “unapproved and misbranded products related to COVID-19.”

According to the FDA, my vitamin C, vitamin D3 and quercetin products are “unapproved new drugs sold in violation of section 505(a) of the Federal Food, Drug, and Cosmetic Act.”

As support for this claim of wrongdoing, the FDA highlights statements in articles on my website that are fully referenced and supported by published science. None of these articles have any commercial advertising linking the information to my products, and none of my product pages makes claims about preventing, curing or treating COVID-19.

Even this seemingly benign tweet stating practical adoption of vitamin c and vitamin d in mainstream medicine was listed as an offensive, illegal message.

The fully referenced article, “Vitamins C and D Finally Adopted as Coronavirus Treatment,” provides proof that this statement is completely truthful. But, the truth becomes treason in an empire of lies.

I co-wrote a scientific publication with William Grant, Ph.D.,10 and Dr. Carol Wagner,11 both of whom are on the GrassrootsHealth vitamin D expert panel. In it, we demonstrate the clear link between vitamin D deficiency and severe cases of COVID-19. This paper was published in the peer-reviewed medical journal Nutrients.12

I am committed to providing truthful information, for free, to anyone that wants it, and I am not going to allow people to die from COVID-19 and other respiratory infections due to vitamin D deficiency or any other easily remedied cause.

The agrochemical front group Cornell Alliance for Science (CAS),13 the primary funding for which comes from the Bill & Melinda Gates Foundation,14 was quick to jump on CSPI’s bandwagon, falsely stating15 that “pages advertising vitamin C and quercetin as having ‘synergistic effects that make them useful in the prevention and early at-home treatment of COVID-19’ were still online” nearly a month after the FDA’s warning letter.

The false statement there is “pages advertising.” There are a) advertisement/marketing pages for products in my online shop, and b) fully referenced scientific news articles, which are not, in fact, “advertising,” as they are not linked to any of my products, nor do they refer to or recommend any specific brands, mine or otherwise.

Such coordinated attacks are to be expected, though, considering Gates’ influence over the operation, and seeing how CAS and CSPI work closely together — a fact CAS admits in its attempted hit piece.16

Then there’s the Center for Countering Digital Hate (CCDH), a shady U.K.-based organization with anonymous funding led by Imran Ahmed. Ironically, while CCDH is supposed to be an “anti-hate” group focused on combating online hate speech, Ahmed pursues his enemies with unbridled extremist rhetoric aimed at riling up public outrage against them.

In short, what Ahmed is really engaged in is digital hate coaching. He’s even gone so far as to publish an actual hit list17 of the “Top 10 anti-vaxxers” it wants permanently silenced and eradicated from public forums. The list shows, by way of crossing out names, which have already been successfully deplatformed, and from which social media.

CCDH Is a Tool for Global Technocracy

Ahmed is the CEO and founder of CCDH, and was appointed to the steering committee of the U.K. government’s Commission on Countering Extremism Pilot Task Force in April 2020, just as fearmongering about the COVID-19 pandemic was ramping up.

Aside from Ahmed, the CCDH consists of a single “Patron,” British TV personality and Countdown host Rachael Riley,19 and a seven-person board of directors that “supports and scrutinizes” Ahmed’s work.

According to Influence Watch,20 Riley worked with Ahmed to get commentator Katie Hopkins and MP George Galloway banned from Twitter back in January 2020, actually meeting in person with Twitter executives in London. Hopkins’ account was permanently suspended21 while Galloway’s was not.

The CCDH’s funding comes primarily from “philanthropic trusts,” according to this not-readily-accessible web page, but no specific trusts are listed. However, through the connection of co-founder Morgan McSweeney — who left the CCDH for a chief of staff position with Labour Leader Keir Starmer — we can deduce that the CCDH is connected with the technocratic hub that is the Trilateral Commission, where Starmer is a serving member.22

The group can also be linked to other technocratic centers within the globalist network through its board chairman Simon Clark and board member Kirsty McNeill.23

Simon also served as the first director of web services for Reuters, one of the three global news agencies responsible for curating a vast majority of the world’s news. You can learn more about the structure of global news in “Reuters and BBC Caught Taking Money for Propaganda Campaign.”

McNeill, meanwhile, is a member of the European Council of Foreign Relations — another key player behind the Great Reset — and director of policy for Save the Children Fund, which is funded by the Gates Foundation and a partner of Gates’ GAVI Vaccine Alliance.

Another board member is Damian Collins, a member of the British Parliament and former chair of the House of Commons Digital, Culture, Media and Sport Select Committee. So much for being a nongovernmental organization. Collins also founded Infotagion, which “seeks to fight the disinformation contagion about COVID-19.”24

While Ahmed riles against people who publish truthful, fully referenced information about COVID-19 and related vaccines, he fails at the very basics of information-sharing himself.

In “Dismantling the Anti-Vaxx Industry,”25 a short article that somehow made its way into the journal Nature Medicine, Ahmed provides five references, two of which are CCDH material that he himself created. Another two are mainstream media articles that coach hate against “anti-vaxxers.”

He also lies by saying he “recorded a private, three-day meeting of the world’s most prominent anti-vaxxers,” when in fact it was a public, international conference given online, attended by thousands around the world, all of whom had access to the recordings.

He could have done the normal, ethical, truly journalistic thing and admitted he simply attended a public virtual conference, but he chose not to. Instead, he twisted it into some undercover agent mission where he secretly recorded private discussions that revealed the inner workings of “the opposition.”

It’s laughable, really. The thing is, when people bother creating such unnecessary and easily exposed lies, it really doesn’t bode well for their honesty and forthrightness in more serious matters — such as vaccine safety, for example.

Getting banned by technocrats and billionaire front groups is a badge of honor, and will only make people more interested to see what the elitists are trying to hide.

Just ordered it on Amazon. Now…we shall see if they pull it or not! I’ve been waiting for > 2 months for Dr. Judy Mikovits’s 3rd book in her ‘Plague of Corruption’ series. They keep pushing the ‘delivery’ date back on that one.

Mercola is great. I have ordered a few other books and some of them never arrived and the money was refunded. Says it all really…..

“But, the truth becomes treason in an empire of lies.”
Is that an original by Dr. Merocola? It certainly is a quotable line!