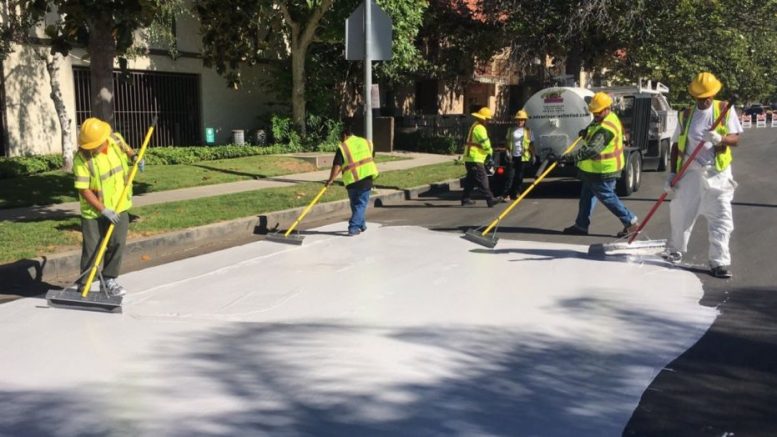 Los Angeles already has a $74 million budget deficit thanks to its homeless problem, but Technocrat city managers are not deterred in their fight against global warming. Since the ‘paint’ only lasts 7 years, they will get to do it all over again.  ⁃ TN Editor

California officials are hoping their latest attempt to stem the rising tides of climate change leads to a more socially conscious — and cooler — summer.

Officials in Los Angeles have been painting streets white to reduce the effect of urban “heat islands” and combat the effects of climate change.

The LA Street Services began rolling out the project last May, which preliminary testing shows has reduced the temperature of roadways by up to 10 degrees. The project involves applying a light gray coating of the product CoolSeal, made by the company GuardTop.

“CoolSeal is applied like conventional sealcoats to asphalt surfaces to protect and maintain the quality and longevity of the surface,” according to the company website. “While most cool pavements on the market are polymer based, CoolSeal is a water-based, asphalt emulsion.”

While each coasting could can last up to seven years, they are also pricey, with the estimated cost of $40,000 per mile, the L.A. Daily News reported.

CoolSeal does pass the California skid test in addition to the slip test for wet traction, and is applied in two coats, each 50 microns thick, over an asphalt roadway or a slurry-sealed asphalt roadway, according to the streets department.

By reducing the temperature of the city streets, officials say it can help reduce temperatures in the neighborhoods where the sealant is applied.

With its numerous streets and freeways, Los Angeles suffers from the “heat island” effect, which causes urban regions to become warmer than their rural surroundings, forming an “island” of higher temperatures.

Don’t stop at the roads paint everything you climate control freaks!!!

This is liberal insanity. It’s worthless and a waste of taxpayers money.

They need to cover the roads with aluminum foil if they want to make a difference.
Visible light will reflect off the paint, but the emissivity (absorption) of this paint in the infrared range, which is heat, is probably about the same as black top, which is very high.
So it is a monster boondoggle. Good time to have stock in that paint company.

This guy (Mr.Brown) is turning into Howard Hughes. Paronoid no matter what the game is in this “state” of confusion.

This is racist. Covering black street with white privileged paint is just wrong.