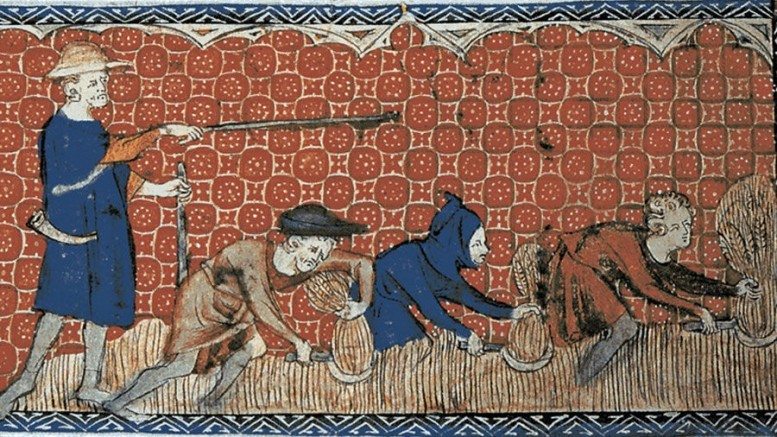 Please Share This Story!
PDF 📄
This article originated in Scotland, a nation that historically understands something about serfs and serfdom. The Great Reset is merely that latest installment in a 50 year-old plan to eradicate private property and dominate the entire planet. ⁃ TN Editor

The Great Reset is just the latest installment of the grand agenda to completely reorder global society by the end of the 21st century. Prior to the Great Reset for instance, the United Nations (UN) Agenda 21 was adopted by 178 governments in Rio in 1992, taking the form of a “comprehensive plan of action to be taken globally, nationally and locally by organizations of the United Nations System, Governments, and Major Groups in every area in which human impacts on the environment.”

Global, unelected special interests have a vision of what your future is going to look like, and these international networks of power ideally want you to blindly accept every aspect of your life being controlled by experts, with this system known as technocracy, or rule by experts (technicians).

Before we delve deeper into the insidious nature of the neo-slavery world order, a little context on the organization behind the reset is needed. It is the brainchild of the World Economic Forum (WEF) at Davos, led by Professor Klaus Schwab, the founder and Executive Chairman of the WEF, with other global organizations such as the International Monetary Fund (IMF) and the UN pushing this initiative.

You Will Own Nothing

Back in 2016, the WEF featured a ridiculous article written by Ida Auken, that described a system akin to neo-feudalism:

A system where you, as an individual, do not own anything, is a system where everything you have can be taken away from you at a drop of a hat. It essentially describes a neo-feudal, or neo-slavery, system.

In feudal systems in medieval Europe (5th to 15th century approximately), the serfs, who were the lowest class of people in a hierarchical system, were slaves in many ways. Serfs were bound to land and the lords who owned the land, and had little-to-no rights. A serf could not marry, move somewhere else, or change occupation without permission from their lord. So, keep all this in mind when you hear about how supposedly great this reset is going to be.

Yet what exactly is the Great Reset? As Schwab explained in a WEF article in June of 2020:

To achieve a better outcome, the world must act jointly and swiftly to revamp all aspects of our societies and economies, from education to social contracts and working conditions. Every country, from the United States to China, must participate, and every industry, from oil and gas to tech, must be transformed. In short, we need a “Great Reset” of capitalism. There are many reasons to pursue a Great Reset, but the most urgent is COVID-19.

In other words, Schwab is calling for the complete reordering of life on this planet. From the chaos generated by the response of governments to Covid-19, Schwab wants to impose his, and the elite networks of power intertwined in the WEF, version of order. As he writes:

The COVID-19 crisis is affecting every facet of people’s lives in every corner of the world. But tragedy need not be its only legacy. On the contrary, the pandemic represents a rare but narrow window of opportunity to reflect, reimagine, and reset our world to create a healthier, more equitable, and more prosperous future.

Considering that the Great Reset is being pushed on the world in an opportunistic way in response to Covid-19, it is important to highlight that the WEF was one of the main organizers of Event 201. This event took place in October, 2019, and it simulated, or war-gamed, a scenario where a coronavirus pandemic, that began in bats, engulfed the world.

Schwab and Kissinger Sitting in a Tree

It is also important to note how connected Schwab and the WEF are to key individuals and organizations that help shape the world. Schwab has known Henry Kissinger, one of the most globally connected individuals on the planet, for 50 years for instance. In a 2017 interview at Davos, Schwab gushed over Kissinger:

I’m delighted to see you Dr. Kissinger on the screen. For me it’s a very moving moment because actually I met Dr. Kissinger for the first time exactly 50 years ago at Harvard (from 0.07 into video).

In the same interview, when talking about a speech made by the Chinese President, Xi Jinping, Kissinger talks about globalization and the construction of a new international order:

I think that President Xi’s speech was of fundamental significance. It laid out a concept for globalization and some specific challenges and roads to a solution. But to me the most important aspect was that it was an assertion by China of participating in the construction of an international order. One of the key problems of our period is that the international order with which we were familiar, is disintegrating in some respects, and that new elements from Asia and the developing world are entering it. What President Xi has done is to put forward a concept of international order in the economic field that will have to be the subject of conversation and the substance of the creation of an evolving system (2:33 into video).

Kissinger has been a long-term member of an organization that has represented elite networks of power for around 100 years, an organization with a fascinating and intriguing history: namely, the Council on Foreign Relations (CFR).

Dr. Carroll Quigley, who was a Professor of History at Georgetown University for many years, and who also taught at Harvard and Princeton, wrote a book called Tragedy and Hope in 1966. In the book, he described a future system that has many similarities to our system today. Quigley noted that he had been given access to the private records and secret papers of the network behind the CFR (Quigley, 1966: 950). In relation to the potential of a future feudal-like system in the hands of elite networks of power, Quigley wrote that:

In addition to these pragmatic goals, the powers of financial capitalism had another far-reaching aim, nothing less than to create a world system of financial control in private hands able to dominate the political system of each country and the economy of the world as a whole. This system was to be controlled in a feudalist fashion by the central banks of the world acting in concert, by secret agreements arrived at in frequent private meetings and conferences. The apex of the system was to be the Bank for International Settlements(BIS) in Basle, Switzerland, a private bank owned and controlled by the world’s central banks which were themselves private corporations.

Each central bank, in the hands of men like Montagu Norman of the Bank of England, Benjamin Strong the New York Federal Reserve, Charles Rist of the Bank of France, and Hjalmar Schacht of the Reichsbank, sought to dominate its government by its ability to control treasury loans, to manipulate foreign exchanges, to influence the level of economic activity in the country, and to influence cooperative politicians by subsequent economic rewards in the busines world (Quigley, 1966: p.324).

Feudalism: The Dark Ages from about 500-1517. When the Roman Empire ruled the world, and the Roman Catholic Popes ruled the world. Those days there was no separation of church and state. The church (Roman Catholic) murdered millions. So if we are going back to Feudalism, the church and state again must combine again worldwide. What religion are they going to push the world into? Recently in the Jesuit news they commanded Pilosi (a Roman Catholic) to impeach Trump. Yes, the Jesuits. It is interesting how all these global leaders are in bed with the Jesuit Pope. We are talking… Read more »

The One World Religion will be based on Magick, as Aleister Crowley termed it. (Crowley, a secret agent of the Luciferian secret society elite of the British Empire, was a false prophet foreshadowing the ‘religious’ spirit of the New World Order, which he called ‘the New Aeon’.) At its ‘esoteric’ core, conscious Satanism/Luciferianism; its exoterism for the masses a kind of syncretism assimilating all the old religions. Its mass appeal will lie in great signs and wonders — lying wonders — owing to what I call a public breakthrough into the ‘subtle’ order, the ‘worlds’, forces and intelligences that the… Read more »

“The Great Reset” will finally, when all is in place for it, be a radical reset of the fundamentals of the scientific worldview on which the modern era originating in the West was built upon. After crashing the economy and various other pillars of the present system, they ultimately plan to collapse our collective understanding of reality itself, currently dominated by scientific materialism and secularism and the whole heritage of the European ‘Enlightenment’ along with half-hearted lip-service to certain religious residues of the pre-modern world. This ‘magickal revolution’ crashing the paradigm of secular modernity beyond any doubt, will be the… Read more »

While we own nothing, what will Klausi, Heinzi, Charley, Billy Jr, and the rest of them own?

Wouldn’t you love to know the carbon footprint of each of these sociopaths and their families?

By the way, I’ve several times read that Gates’ kids’ doctor commented that Gates never had them vaccinated. You’re expected to get this poorly tested, rushed-to-market, experimental vaccine – but Gates and his family never will. Nor will these others. Count on it.

(My apologies: I previously accidentally posted this to the wrong article. Too many tabs open, as usual.)

Great article but a small error – Event 201. The 0 in this title is actually the globe but is misinterpreted as a zero. Check the logo though and it’s plain to see that it is the number 21. Some remark that this is a reference to 2021 but it could also refer to 21st century. Either way ‘21’ fits the tyranny we saw unfold which makes their level of arrogance and self-assurance all the more disgusting. That said, arrogance is the reason empires fall since they cannot perceive of what could go wrong so do not be fazed by… Read more »