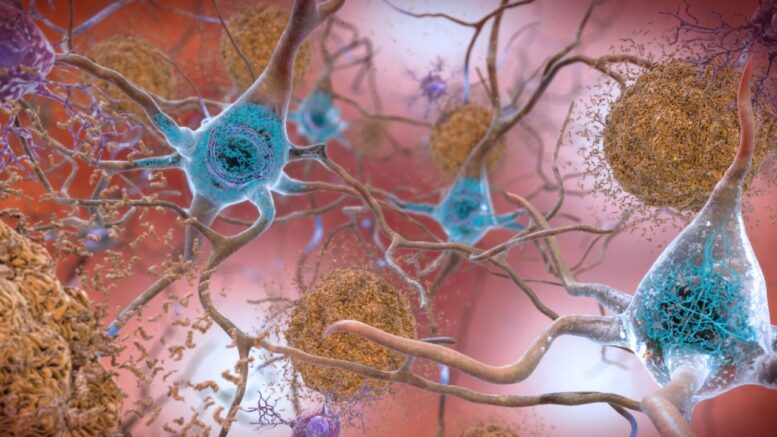 Please Share This Story!
PDF 📄
Dr. Russell Blaylock, MD wrote in May that “By wearing a mask, the exhaled viruses will not be able to escape and will concentrate in the nasal passages, enter the olfactory nerves and travel into the brain.” That’s why I will never wear a mask! ⁃ TN Editor

The coronavirus that causes COVID-19 can sometimes hijack brain cells, using the cells’ internal machinery to copy itself, according to a new study.

The research, posted Sept. 8 to the preprint database bioRxiv, has not yet been published in a peer-reviewed journal, but it provides evidence that SARS-CoV-2 can directly infect brain cells called neurons. Although the coronavirus has been linked to various forms of brain damage, from deadly inflammation to brain diseases known as encephalopathies, all of which can cause confusion, brain fog and delirium, there was little evidence of the virus itself invading brain tissue until now.

“We are actively looking at more patient tissues to be able to find how frequently such brain infections occur … and what symptoms correlate with infection of which areas of the brain,” senior author Akiko Iwasaki, an immunologist at Yale University, told Live Science in an email. In addition, scientists must still figure out how the virus enters the brain in the first place, and whether it can be kept out of the brain, the authors noted in their report.

To see whether SARS-CoV-2 could break into brain cells, the study authors examined autopsied brain tissue from three patients who died of COVID-19. They also conducted experiments in mice infected with COVID-19 and in organoids — groups of cells grown in a lab dish to mimic the 3D structure of brain tissue.

“This study is the first to do an extensive analysis of SARS-CoV-2 [brain] infection using three models,” said Dr. Maria Nagel, a professor of neurology and ophthalmology at the University of Colorado School of Medicine, who was not involved in the study. Previously, there were only “rare case reports” of SARS-CoV-2 RNA and viral particles found in post-mortem tissue from patients, Nagel, who specializes in neurovirology, told Live Science in an email.

In the organoids, the team found that the virus could enter neurons through the ACE2 receptor, a protein on the cell surface that the virus uses to enter the cell and trigger infection. They then used an electron microscope, which uses beams of charged particles to illuminate the tissue, to peer inside infected cells. They could see coronavirus particles “budding” within the cell, demonstrating that the virus had commandeered the neurons’ internal machinery to build new copies of itself.

While setting up shop in infected cells, the virus also caused metabolic changes in nearby neurons, which were not infected. These nearby cells died off in large numbers, suggesting that the infected cells might steal oxygen from their neighbors in order to keep producing new virus, the authors noted.

“We do not know if similar events are taking place in infected people,” though there is some evidence they might be, Iwasaki noted. In the autopsied tissue, the team found SARS-CoV-2 had infected some neurons in the wrinkled cerebral cortex. Near these infected cells, they found evidence of “small strokes” having taken place, hinting that the virus might steal oxygen from nearby cells in the brain just as it did in the organoids, Iwasaki said.

Notably, the infected brain tissue was not flooded with immune cells, as might be expected. When the Zika virus or rabies virus invades the brain, a large number of immune cells usually follow, the authors noted. So it’s possible that when SARS-CoV-2 manages to infiltrate the brain, it may somehow escape the body’s typical defense against such invasions. It’s not yet known how this unusual immune response might affect the course of the infection, but it may make the virus more difficult to clear from the brain. And though few immune cells flock to the site of infection, dying neurons nearby can trigger a chain-reaction in the nervous system that still leads to harmful inflammation, the authors noted.

Finally, in the mouse experiments, the authors genetically modified one group of mice to express human ACE2 receptors in their brains, while another group of mice only bore the receptor in their lungs. The first set of mice rapidly began losing weight and died within six days, while the second set did not lose weight and survived. In addition, in the mice with brain infection, the arrangement of blood vessels in the brain changed dramatically, presumably to redirect nutrient-rich blood to “metabolically active hot spots” where the virus had taken over, the authors wrote.

“The coronavirus that causes COVID-19 can sometimes hijack brain cells, using the cells’ internal machinery to copy itself, according to a new study.”
THERE IS NO VIRUS. END OF THE STORY.

God bless you for speaking out, Sapere Audete.

Thank you for that comment. I was just about to comment the same thing. Basically; that story is a Trojan horse; this is so that later when we resist their mandates, they will label us “belligerent” and we are not thinking right because we have the covid in our brain and can’t think for ourselves. Then we have the author saying this is why I won’t ever ware a mask; because the author believes the covid is real and the covid may go to the author’s brain and make the brain function silly. Very convenient for when they are trying… Read more »

Oh great; here’s another hoax story about a hoax virus. I wonder how much Big Pharma paid this guy to write this drivel. Or maybe it was the globalists who crossed his palm. BAH !! None of the corona viruses have ever been isolated and that proves “Covid-19” doesn’t exist. andrewkaufmanmd.com

Remember the so-called contaminated PCR tests and that swab is pushed into the nasal cavity up close and personal to the blood brain barrier. What were the swabs contaminated with? My personal opinion is that the tests could also be contributing to “brain contamination”

Hopefully, the fact-checkers will respect the scientific studies of the Covid-19 virus and not censor this article. The article is scientific information that may be useful to People with health problem associated with symptoms of the Coronavirus. Restore the doctor-patient relationship and eliminate the politics of fear.