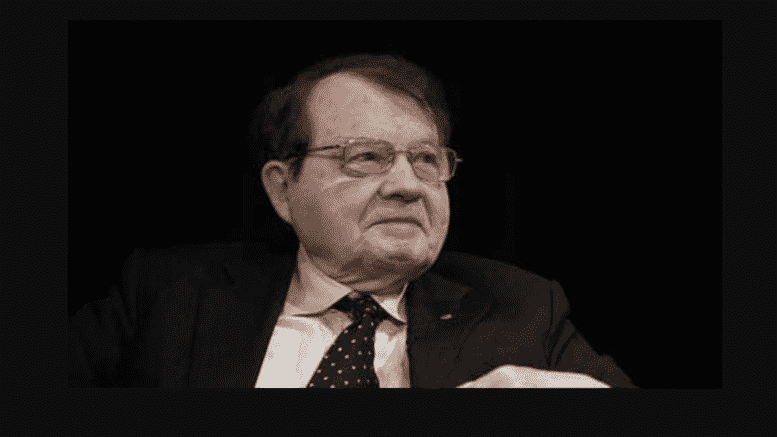 Please Share This Story!
PDF 📄
This world-class virologist and recipient of the Nobel Prize in Medicine clearly articulates what other scientists have claimed, that it is the mRNA vaccines themselves that are causing the mutations (“variants”) of the virus around the world. He flatly states that the mRNA vaccine is a “scientific error as well as a medical error.” ⁃ TN Editor

Luc Montagnier, a French virologist and recipient of the 2008 Nobel Prize in Medicine for his discovery of the human immunodeficiency virus (HIV), has recently exposed the dangers of the COVID-19 vaccines. Montagnier discussed the issue in an interview with Pierre Barnérias of Hold-Up Media earlier this month, which was exclusively translated from French into English for RAIR Foundation USA.

The vaccines don’t stop the virus, argues the prominent virologist, they do the opposite — they “feed the virus,” and facilitate its development into stronger and more transmittable variants. These new virus variants will be more resistant to vaccination and may cause more health implications than their “original” versions.

During the interview, professor Montagnier referred to the vaccine program for the coronavirus as an “unacceptable mistake.” Mass vaccinations are a “scientific error as well as a medical error,” he said. “The history books will show that, because it is the vaccination that is creating the variants.” Montagnier explained that “there are antibodies, created by the vaccine,” forcing the virus to “find another solution” or die. This is where the variants are created. It is the variants that “are a production and result from the vaccination.”

Montagnier details that the mutation and strengthening of the virus occurs owing to the phenomenon known as Antibody Dependent Enhancement (ADE). ADE is a mechanism that increases the ability of a virus to enter cells and cause a worsening of the disease. ADE occurs when the antibodies generated during an immune response recognize and bind to a pathogen, but they are unable to prevent infection. Instead, these antibodies act as a “Trojan horse,” allowing the pathogen to get into cells and exacerbate the immune response.

In America, routinely recommended vaccines do not cause ADE. If they did, they would be removed from circulation. Phase III clinical trials of new vaccines are designed to uncover frequent or severe side effects before the vaccine is approved for use. Typically, it takes 2-4 years to assess whether a vaccine is safe, but with COVID-19 vaccines, manufacturers are spending around six months or less for testing.

According to the Cambridge University, ADE occurs in SARS-CoV-1, MERS, HIV, Zika, and Dengue virus infection and vaccination.

Data from around the world confirms ADE occurs in SARS-CoV-2, which causes COVID-19, says Montagnier. “You see it in each country, it’s the same: the curve of vaccination is followed by the curve of deaths. I’m following this closely and I am doing experiments at the Institute with patients who became sick with Corona after being vaccinated.”

In a medical documentary Hold Up: Return of the Chaos, released in France on November 11, 2020, Montagnier rejected the then-upcoming vaccine against COVID, saying he will not be vaccinated. “My conscience tells me not to,” he said. Montagnier also addressed his French colleagues, urging them “to uphold their [medical] titles as doctors, not as the sheep.”

The movie discusses the origins of the virus, criticizes harmful and irrational mask mandates as well as lockdowns, quarantines, abuses of government overreach, and explores effective COVID treatments such as hydroxychloroquine. The video was banned on YouTube, possibly because the creators imply the World Economic Forum used the pandemic to establish world dominance as a part of a global plan that is known as the Great Reset.

1. Short-term side effects: these are not the normal local reactions found for any vaccination, but serious reactions involve the life of the recipient such as anaphylactic shock linked to a component of the vaccine mixture, or severe allergies or an autoimmune reaction up to cell aplasia.

2.1 Induction of facilitating antibodies  – the induced antibodies do not neutralize a viral infection, but on the contrary facilitate it depending on the recipient. The latter may have already been exposed to the virus asymptomatically. A low level of naturally induced antibodies may compete with the antibodies induced by the vaccine.

2.2 The production of antibodies induced by vaccination in a population highly exposed to the virus will lead to the selection of variants resistant to these antibodies. These variants can be more virulent or more transmissible. This is what we are seeing now. An endless virus-vaccine race that will always turn to the advantage for the virus.

3. Long-term effects: Contrary to the claims of the manufacturers of messenger RNA vaccines, there is a risk of integration of viral RNA into the human genome. Indeed, each of our cells has endogenous retroviruses with the ability to reverse transcriptase from RNA into DNA. Although this is a rare event, its passage through the DNA of germ cells and its transmission to future generations cannot be excluded.

“Faced with an unpredictable future, it is better to abstain.”

Earlier last year, Montagnier presented a powerful case proving that SARS-CoV2 could only be a genetically engineered coronavirus, therefore the vaccine strategy should be based on that fact.

First I am wondering if the video is available in English. Secondly, I wish he could address plainly how the unvaxxed are getting the variants through the vaxxed. Also, the connection with the flu vaccines administered right before the so called covid devil showed up. Because I know of many who were very sick 1-2 years prior to the plandemic who round up forced on ventilators, and or died from complications of the flu from and had sepsis which my friend did.

Hello Nobel Prize Winner,there are noch viruses and no variants. End of the story.

Soliciting tips and information leading to solid evidence of malfeasance and negligence regarding Covid Vaccines: discrimination in employment, refusal of medical service due to vaccination status and any other actions by any organization or agency that have resulted in damages or injury due to Covid restrictions, mask wearing, “social distancing” or “contact tracing”. All Information will be kept in a central online location that can be accessed by all. This information is intended to be used in COVID trials and class action suits. This is NOT AN ATTORNEY WEBSITE, and there is no obligation, and you are advised NOT to use… Read more »

VERY COOL. Thank you for creating this database. I think VAERS may have already been compromised. Remember! Back-up to multiple sites and to an outside hard source. They will be after you if you begin to gain influence. Consequently, take care of back-ups and make it part of your daily routine. Don’t forget. Again, a BIG THANKS. You are a hero of freedom.

Meria With the News | Meria.net

Nobel Prize Winner: COVID Variants “Are A Production And Result From The Vaccination” | Flurry of Thoughts

[…] Source: Nobel Prize Winner: COVID Variants “Are A Production And Result From The Vaccination” […]

Nobel Prize Winner: “Cov Variants Are a Production and Result From the Vaxination” – Take Back Australia

Nobel Prize Winner: COVID Variants “Are A Production And Result From The Vaccination” | Thought Crime Radio

[…] Nobel Prize Winner: COVID Variants “Are A Production And Result From The Vaccination” […]

Been pretty sick with a variant. Considering how the lemmings will keep getting shot up with “leaky vaccines” causing the strains to worsen, I’m glad I’m catching it now.
Natural immunity is real.