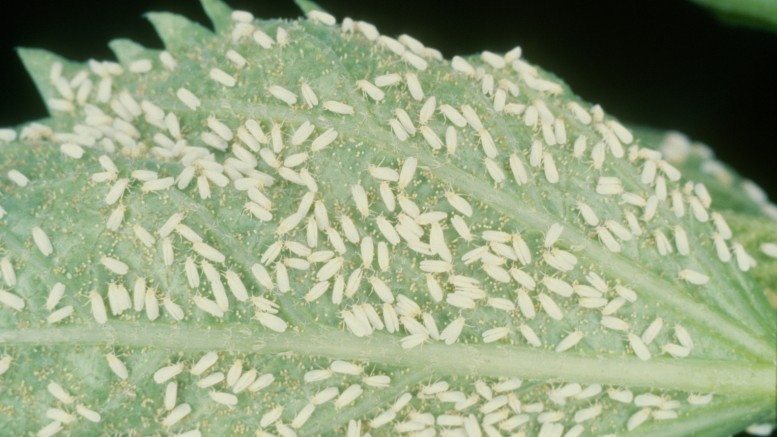 Please Share This Story!
PDF 📄
Mark my words on this one: Genetically modified whitefly’s will be presented as the final solution for this problem, just like sterile mosquitoes were created to the fight Zika virus. Pandora’s box has been opened, never to be closed again. ⁃ TN Editor

A tiny, invasive whitefly that is resistant to pesticides and carries crop-devastating viruses has been found outdoors in the United States for the first time, raising concerns among fruit and vegetable growers.

The Q-biotype whitefly turned up in April in the heavily manicured gardens of an affluent neighborhood in south Florida’s Palm Beach County, where landscapers were spraying the flowers and shrubs regularly with insecticides.

Its discovery outdoors comes more than a decade after it was first found in a US retail nursery in Arizona.

Since 2005, the whitefly has also been found in about two dozen US states, but only in greenhouses.

It is already considered a major invasive pest worldwide.

Now that the Q-biotype whitefly is outdoors in the United States, researchers say it poses a serious threat to crops such as tomatoes, beans, squash, cotton and melons.

Having whiteflies outdoors makes the problem “much more difficult to control,” and they may never be fully eradicated, said Lance Osborne, a professor of entomology at the University of Florida.

“The resistance to pesticides — that is what really sets them apart,” he told a few dozen growers who attended a recent session to learn about the whitefly in Homestead, an agricultural area south of Miami.

“The best single treatment we have kills 90-91 percent of them. That is as good as we can do without multiple applications.”

Whiteflies draw fluid out of a plant’s leaves, and excrete a sticky residue that allows fungus to grow, turning the leaves black and making it harder for them to photosynthesize.

The insects can also spread more than 100 viral diseases that weaken the plants and can make fruits and vegetables inedible.

There are dozens of different kinds of whiteflies in the world. This one, known as Q-biotype whitefly (Bemisia tabaci), looks exactly like the silverleaf whitefly, or B-biotype, but is a completely different species.

The Q-biotype whitefly is believed to originate in the Mediterranean region, particularly from tomato fields in Spain, Portugal and Israel, Osborne said.

Since its discovery outdoors in Florida in April, they have been found in more than 40 locations across the state, including residences, wholesale nurseries and retail plant outlets, crawling on the leaves of hibiscus, eggplant, lantana, ficus hedges and porter weeds.

Said the spider to the fly, I’ve been brought here to “Eat YOU!” bwah, ha, ha! Food, glorious spider food, the spiders are anxious to try them. What is the predator of white flies and would garlic spray and diced garlic be beneficial to saving gardens everywhere? Maybe beneficial predator insects is the answer. We never use insecticides and have done alright with our gardens for years. With a garlic spray, hardly an insect hung around. We made nice garden snakes at home to take care of the annual seasonal slug run. We make sure there are lots and lots… Read more »