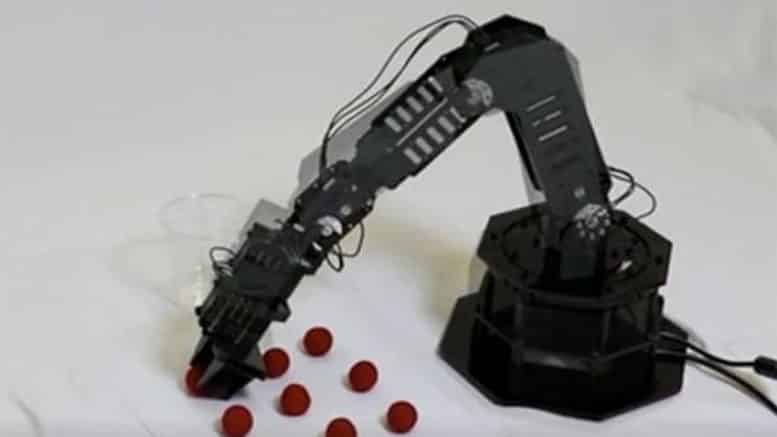 Please Share This Story!
PDF 📄
Hailed as a major scientific breakthrough, this robot mimics a newborn child in discovering its identity and how learn about and relate to its environment. The twist is that it can also repair itself if broken. Autonomous, self-learning robots are the reason that many experts are are warning about existential threats to mankind.  ⁃ TN Editor

Scientists have created a self-aware robot capable of operating on its own without any instructions, in a major scientific breakthrough.

Engineers at Columbia University, in New York, have reached a pinnacle in robotics inventions, inventing a mechanical arm able to programme itself – even after it is malfunctioned.

Professor Hod Lipson, who leads the Creative Machines lab, where the research was carried out, likened the robotic arm to how a “newborn child” adapts to their environment and learns things on its own.

The group of scientists claimed this is the first time a robot has shown the ability to “imagine itself” and work out its purpose, figuring out how to operate without inbuilt mechanics. In the study, published in the journal Science Robotics, Prof Lipson said: “This is perhaps what a newborn child does in its crib, as it learns what it is.

“We conjecture that this advantage may have also been the evolutionary origin of self-awareness in humans.

“While our robot’s ability to imagine itself is still crude compared to humans, we believe that this ability is on the path to machine self-awareness.”

The mechanical arm was designed with no knowledge of physics, geometry or dynamics.

After spending around 35 hours moving at random, the mechanism was able to grasp intensive computing knowledge and figure out its capabilities.

Shortly after the mechanical arm was able to construct its own biomechanics, allowing it to cleverly pick up and drop objects.

The robot also performed other tasks such as writing using a marker.

The researchers printed a 3D-deformed part to simulate a damaged part, to see if the robot was able to detect the fault and adapt its mechanics.

The arm was able to detect the malfunction, and retrained its system to continue performing tasks despite the damaged part.

This article is unsettling. Deeper questions must be asked, such as HOW such a thing is even possible. Is it? Or are we seeing something else mimicking what we think we are making in terms of “AI”? Were some evil spirit to become that “ghost in the machine”, how could we ever know? The reasonable conclusion would be that the AI we made had somehow gone bad, but what if it was some outside force we cannot account for nor measure that inhabits the entire structure (IoT)? Maybe humanity is giving a global digital “smart grid” network a body that… Read more »