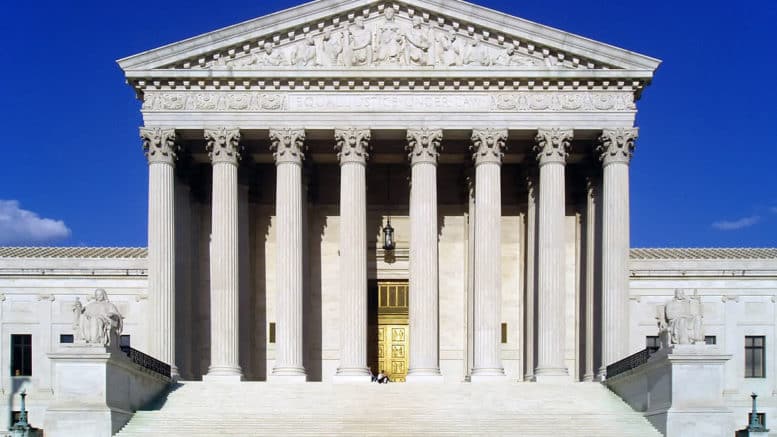 Young Oregonians are suing the Feds for failing to address carbon pollution from fossil fuels, and the case is not yet thrown out of court. The case is centered in Eugene, the left-wing hotbed of environmentalism on the West Coast. ⁃ TN Editor

The U.S. Supreme Court on Friday rejected for now a bid by the President Donald Trump’s administration to block a trial in a lawsuit filed by young activists who have accused the U.S. government of ignoring the perils of climate change.

The loss for the administration means it now faces a high-profile examination of U.S. climate change policy during the trial that was due to begin on Oct. 29 in Eugene, Oregon but has since been postponed by the judge.

Chief Justice John Roberts on Oct. 19 had temporarily put the case on hold while the court as a whole decided how to proceed.

The Supreme Court’s three-page order noted that the administration may still have grounds to take its arguments to the San Francisco-based 9th U.S. Circuit Court of Appeals.

Conservative Justices Clarence Thomas and Neil Gorsuch indicated they would have granted the administration’s request. There was no indication how Trump’s new Supreme Court appointee, conservative Brett Kavanaugh, voted on the issue.

In the lawsuit, 21 activists, ages 11 to 22, said federal officials violated their rights to due process under the U.S. Constitution by failing to adequately address carbon pollution such as emissions from the burning of fossil fuels.

The lawsuit was filed in 2015 against former President Barack Obama and government agencies in a federal court in Eugene, Oregon. Both the Obama and Trump administrations have failed in efforts to have the lawsuit thrown out.

The administration has said a courtroom is not the appropriate venue for a debate on climate change policy.

“This suit is an attempt to redirect federal environmental and energy policies through the courts rather than through the political process, by asserting a new and unsupported fundamental due process right to certain climate conditions,” Trump administration Solicitor General Noel Francisco said in court papers.

Francisco noted that the plaintiffs are seeking to hold the U.S. government liable for the cumulative effects of carbon dioxide emissions “from every source in the world over decades.”

Lawyers for the young activists, led by Julia Olson of a Eugene-based group called Our Children’s Trust that brought the lawsuit, have said their clients have suffered “irreparable harm” from the effects of a changing climate.