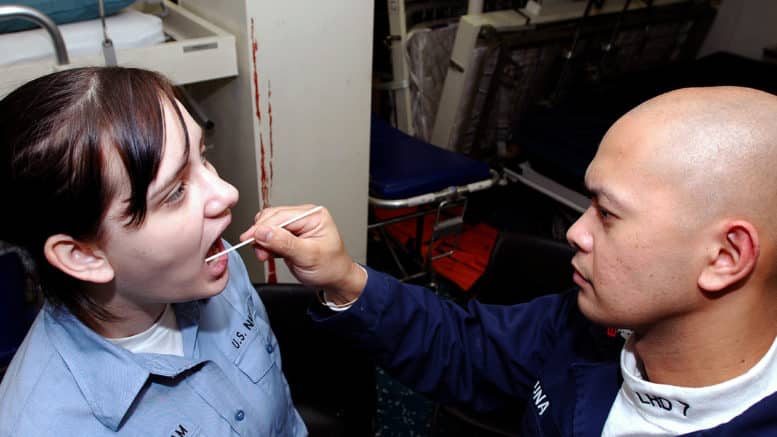 Please Share This Story!
PDF 📄
Because they cannot get a national DNA database working, Technocrats will push from state to state to until they get a single state to commit to registering DNA for every citizen. Then, it will spread to the nation.  ⁃ TN Editor

In Arizona this week, a state legislator named David Livingston stirred a controversy about DNA that may be a portent of privacy nightmares to come. A law he proposed would have forced many residents to give samples of their DNA to a state database, to be stored with their name and Social Security number.

If passed, “many people—from parent school volunteers and teachers to real estate agents and foster parents—will have no choice but to give up their DNA,” The Arizona Republic reported. “Any DNA in the database could be accessed and used by law enforcement in a criminal investigation. It could also be shared with other government agencies across the country for licensing, death registration, to identify a missing person or to determine someone’s real name.”

A public outcry followed. In response, the bill was amended to require DNA “only from professionals who care for patients with intellectual disabilities in an intermediate care facility.” That focus is most likely due to a recent, widely reported crime: Weeks ago in Phoenix, police collected DNA from employees at a medical facility where a woman in a coma unexpectedly gave birth, identifying her alleged rapist.

All 50 states maintain the DNA of at least some convicted criminals. And members of the military must give DNA samples to ease identification in battlefield deaths.

Some go so far as to advocate forcing everyone to submit DNA samples to the government for storage. In 2002, for example, Nature published a commentary arguing that “the most logical and fair practice—and also the most controversial—would be to DNA-test all individuals at birth. This would not only act as a deterrent from crime for all members of the community, but would make the task of catching criminals easier for police. If the correct safeguards are in place to protect civil liberties, why should a proposal to test everyone at birth be a frightening one? On the other hand, if the correct safeguards are not in place and the fears are justified, why are we daring to test anyone at all?”

There are two primary dangers of a universal DNA database. First, as Christine Rosen once wrote, DNA “provides an inescapable means of identification, categorization, and profiling” that is uniquely revelatory:

DNA is a person’s “future diary.” It provides genetic information unique to each person; it has the potential to reveal to third parties a person’s predisposition to illnesses or behaviors without the person’s knowledge; and it is permanent information, deeply personal, with predictive powers. Taken together, the coming age of DNA technology will change the character of human life, both for better and for worse, in ways that we are only beginning to imagine—both because of what it will tell us for certain and what it will make us believe. To know one’s own future diary—or to know someone else’s—is to call into question the very meaning and possibility of human liberty.

Second, imagine a permanent database of information that powerful. How long do you anticipate that trove would exist before being breached by nefarious actors? My assumption is that all permanent databases of sufficient size and value will be hacked eventually—and sooner rather than later, when the security infrastructure is designed and maintained by IT bureaucrats in state governments.

What if adequate safeguards are in place? I do not grant the possibility—not that the risks have stopped millions of consumers from voluntarily submitting their DNA to databases maintained by private technology corporations, as is their right.

Arizona should reject even the watered-down proposal. A person shouldn’t be compelled to give a DNA sample in order to work in an intermediate-care facility. And passing that requirement into law would raise valid slippery-slope concerns.