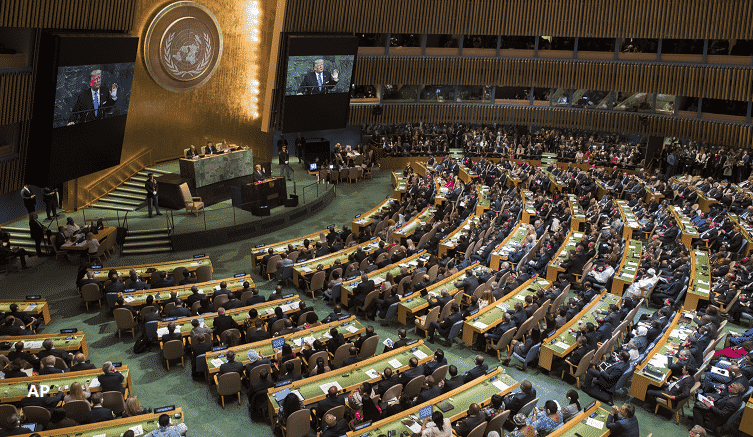 Please Share This Story!
PDF 📄
The U.N. is the solo driver for planetary Sustainable Development, aka Technocracy. As a totally managed economic system run by science and engineering, it will be a Scientific Dictatorship and that will be the governance. Government as we know it will not be necessary. ⁃ TN Editor

In the 1960s, an informed but naïve undergraduate, I was walking across the campus of the University of Pennsylvania with the Chairman of the Chemistry Department, Prof. Charles C. Price. He told me that he was president of the United World Federalists, and asked if I knew what that organization was. When I said that I did not, he replied that they believed in a one-world government that would grow out of the United Nations. I was nonplussed as I had never heard anyone suggest that idea before. To me, the United Nations was a benevolent organization dedicated to pressuring the world community in the direction of peace, and to operating charitable programs to help the struggling, impoverished peoples of the world. I imagined the UN as a kind of United Way on a worldwide scale.

How would Prof. Price’s vision of a new world government emerge? Although there was a socialistic thread in its founding document, the United Nations was formed based on a vision of human rights presented in the “Universal Declaration of Human Rights” (UDHR) which placed the concept of rights at the forefront for the progress of the world body. And rights are the mainstay for uplifting human freedom and the dignity of the individual. The UDHR document followed many amazing documents that presented rights as the central concept of the post-feudal world: the English Declaration (or Bill) of Rights of 1689, the U.S. Declaration of Independence with its important and forceful assertion of inalienable natural rights, the powerful U.S. Bill of Rights enacted in 1791, and the French Declaration of the Rights of Man and the Citizen (1789).

The word “rights” appears in almost every sentence of the 1869-word UN document. The document is literally obsessed with rights, and one must assume they are likewise obsessed with the rights successes as manifested in the United Kingdom, the U.S., and France. However, there are some deviations from the rights usage we are all familiar with. In Article 3, Instead of the inalienable rights of “life, liberty, and the pursuit of happiness” found in our Declaration of Independence, the UN declares everyone’s right to “life, liberty and security of person.” Are they implying that security will bring happiness? Or are they implying that happiness is too ephemeral a value, and too Western? Perhaps more mundane survival goals are needed by most of the world.

We see a reprise of items from our Bill of Rights such as condemnation of cruel and unusual punishment (Article 5), due process (Articles 6,7,8,9, 10, 11, 14, 17), illegal search and seizure (Article 12), and freedom of speech and assembly (Articles 19,20). But there are new rights introduced which, as early as 1945, were pointing the way towards intervention by the UN in the daily lives of people throughout the world. Throughout the document, they assert the right to food, clothing, medical care, social services, unemployment and disability benefits, child care, and free education, plus the right to “full development of the personality,” (imagine, the UN says I have the right to be me) and the “right freely to participate in the cultural life of the community… and to enjoy the arts” (we each have the right to enjoy a painting or a movie). However, they do not state the right to appear on the “Tonight Show” or “Saturday Night Live”, so there were limits to their largesse.

In 2015, seventy years after their original rights-based document, the UN took a giant step towards the global government that was only hinted at in their first organizing document. They issued a document entitled “Transforming Our World: the 2030 Agenda for Sustainable Development.” This document has 91 numbered sections of the UN’s program for world government. The UDHR is only referenced once in the entire document in Article 19. Unlike the original “mother document” that was under 1900 words, this document is 14,883 words. The 91 items are addressing issues under the five headings of People, Planet, Prosperity, Peace, and Partnership. Additionally, the document provides 17 Sustainable Development Goals (SDGs) to improve life on the planet.

What is meant by the term “sustainable?” The most often quoted definition comes from the UN World Commission on Environment and Development: “sustainable development is development that meets the needs of the present without compromising the ability of future generations to meet their own needs.” The earlier ideas and ideals of rights, freedom, equality, and justice are subsumed under meeting of needs and an explicit environmentalism which emphasizes preventing the depletion of scarce planetary resources. Of course, the takeoff is the Marxist axiom that society should be organized around the idea of “from each according to his ability to each according to his needs.” Thus, Marxism is implicit in sustainability, but is nuanced by its alliance with seemingly scientific adjustments and goals related to environmentalism. A technical jargon is welded to Marxist intentionality to produce a sense of fittingness and modern progress.

The entire “Transforming Our World” document is cast in a stream of consciousness of pious platitudes for a utopian future. It is an outsize utopian dream. Five of the 17 items pertain to the environment. There are goals for the cities, for women, for the poor, and even for life under the water. Absolutely no sphere of human activity is exempt from control by the UN. The key word of course is no longer “rights” except the oblique reference in Article 19. In fact, this writer did not see the word rights even once in this document even though that word appeared in practically every sentence of the original UN document.

As a norwegian living in Stavanger(Norway)were the leading politicians are Agenda 21/2030 stooges I can se the horror unfolding in front of my eyes every day.Smart city, smart meters, smart this and smart that, rules and regulations everywhere that makes no sense
unless you got an agenda.

Better living in the country side far away from A.I. …..