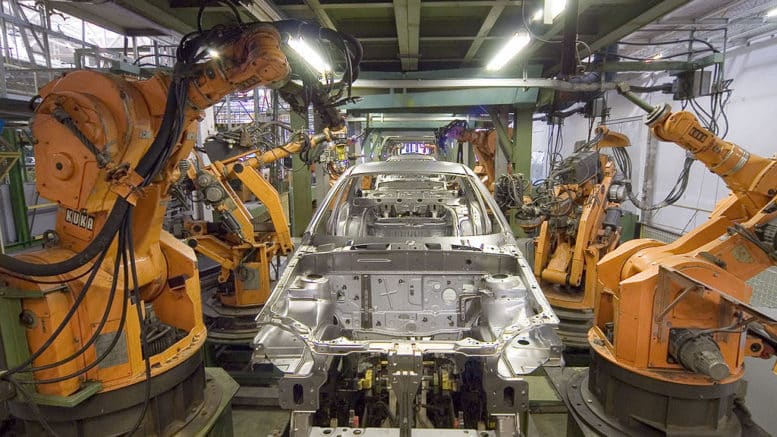 The use of robots in the workplace has more than doubled in just 12 years, studies have found.

Now a new interactive map provides more detail into this ‘robot exposure’ by highlighting the top 10 metropolitan areas threatened by this machine takeover – California being listed as number one.

In addition to areas most at risk, experts found that automation is displacing younger, less-educated and minority workers at the highest rates.

The study and map were developed by The Century Foundation, a progressive think tank headquartered in New York City, which looked across more than 250 metropolitan areas to understand this ‘robot intensity’.

Los Angeles, Long Beach and Santa Ana, California were ranked number one, followed by Chicago, Naperville and Joliet in Illinois.

Dockworkers in Los Angeles have been recently replaced by unmanned electric vehicles to transport shipping containers around the largest port terminal in the US – it was once done by humans in diesel trucks.

And many manufacturers in Chicago are adopting machine help over human workers.

Coming in at number three is Houston, Baytown and Sugar Land, Texas, then Phoenix, Mesa, Scottsdale in Arizona.

At number five is Detroit, Warren and Dearborn, Michigan and then parts of Wisconsin (Milwaukee, Waukesha and West Allis) came in at number six.

Areas of California again make the list at number eight and Indianapolis, Indiana was listed at number nine.

And the tenth metropolis area affected by a robot takeover is Cleveland and Elyria, Ohio.

‘We are not the first to examine the impact of robots on labor market outcomes,’ the authors of the report share.

‘The first generation of studies estimate the ‘risk’ or chance that automation displaces workers.’

‘Several studies predict that, over the next two decades, 45 percent to 57 percent of U.S. and OECD workers will be at risk of losing their jobs to automation.’

People will have to be highly specialized in their field of work or be without hope of any decent future.

Ergo, the masses must be disarmed as we are always 9 meals away from a revolution…