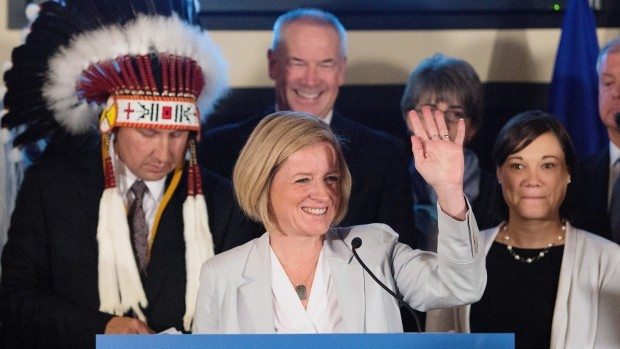 Premier Rachel Notley unveils Alberta's climate strategy in Edmonton Sunday which will include carbon tax and a cap on oilsands emissions among other strategies. (Amber Bracken/The Canadian Press)

Please Share This Story!
PDF 📄
TN Note: An anti-carbon strategy is suicidal to economic growth because the energy deficit that these policies will create cannot possibly be replaced by all the alternative power schemes in the world. Thus, the bet on a “wing and a prayer” that some unseen/uninvented technology will bail them out before it hits the fan.

Alberta’s climate change strategy includes a tax on carbon, a cap on oilsands emissions, a phasing out of coal-fired electricity and an emphasis on wind power.

“Our goal is to become one of the world’s most progressive and forward-looking energy producers,” said Premier Rachel Notley. “We are turning the page on the mistaken policies of the past, policies that have failed to provide the leadership our province needed.”

But the strategy will not be cheap and will be paid for not only by industry, but by ordinary Albertans.

The province estimates the carbon tax will amount to roughly $470 in increased heating, electricity and transportation costs for an average household in 2018, assuming that household consumes the same amount of fossil fuels as it did in 2015.

There will be, however, consumer rebates to offset some of those increases.

The carbon tax on industry is expected to raise $3 billion a year, which will be reinvested in renewable energy sectors and cover increased costs to consumers.

The province sees the emissions cap as motivation for the oilsands sector to innovate and become more globally competitive.

The plan is endorsed by environmentalists and the oilsands industry.

“On behalf of Canadian Natural Resources Ltd., my colleagues from Suncor, Cenovus and Shell, we applaud Premier Notley for giving us, to provide us the position of leadership on climate policy,” CNRL chairman Murray Edwards said at the news conference.

“This plan will make one of the world’s largest oil-producing regions a leader in addressing the climate change challenge,” he said.

“Targets give an important signal to business, let the world know where Alberta is headed, and help ensure that direction leads to the reductions that science and equity demand,” said spokesman Mike Hudema.

“From our industries point of view, there are certainly a lot of details that will need to be filled in on multiple different fronts, but in general we’re quite supportive of the use of natural gas and the phase out of coal,” CAPP president Tim McMillan said.

One of the few dissenting voices came from the opposition Wildrose Party.

“This new carbon tax will make almost every single Alberta family poorer, while accelerated plans to shut down coal plants will lead to higher power prices and further jobs losses,” he said in a news release.