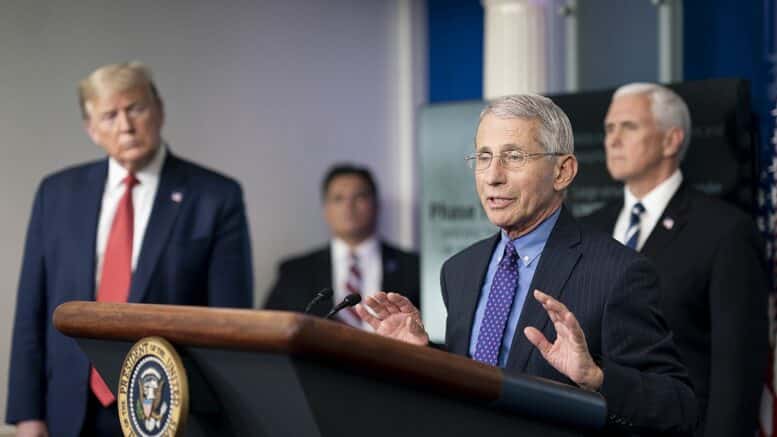 Please Share This Story!
PDF 📄
Wesley Smith correctly points out that freedom at the hands of Technocrats is an oxymoron. Science should properly advise political leaders, but it has no ability to determine or create public policy and should not be allowed to dominate it. ⁃ TN Editor

In recent months, as a vicious pandemic spread out of China, an emerging technocracy—rule by experts—threatened to seize control of much of our public life.

When National Institute of Allergy and Infectious Diseases Director Dr. Anthony Fauci and other infectious disease specialists instructed us to self-isolate, President Donald Trump “shut it [the economy] down.”

Governors issued executive orders shuttering restaurants and hair salons. Mayors banned private gatherings. Funerals—even at the graveside—became grieving ceremonies that most were forbidden to attend. As for beaches and public parks, they became ghost zones.

The policy purpose behind our national quasi-home arrest was to “flatten the curve” of new COVID-19 cases to keep hospitals from being overwhelmed—as happened terrifyingly in Northern Italy. Whether or not our insipidly termed “alone together” national isolation was effective—I think it probably was—we can all give thanks that hospitals did not collapse, and draconian triage measures such as Italy imposed were never required.

But that laudable success came at a terrible toll. Tens of millions were thrown out of work. Despite concerted government efforts to shore up the economy, the small-business sector imploded—some shops and restaurants never to reopen. Uber and taxi drivers lost countless fares. Parking lot attendants and airport shop workers became unemployed. Major corporations faced bankruptcy.

One would have thought that the legal lockdowns were sufficiently restrictive. But once power has been tasted, the human tendency is to grab for ever greater control.

Soon, media pundits and politicians began to refer ominously to a less vibrant, prosperous, and free “new normal.” Flattening the curve quickly metamorphosed from a temporary measure to save hospitals into a permanent effort to prevent anyone from getting sick.

“Experts,” such as the bioethicist Ezekiel Emanuel—a prime architect of the Affordable Care Act—told us with presumed authority, that we could not return to the way things were until a vaccine was developed, a time Emanuel estimated to be potentially as long as 18 months.

Justifying seizing greater control under the mantra, “if it saves just one life,” some of our most influential experts began pounding the drum to make a future COVID-19 vaccine mandatory for everyone. A committee of the New York Bar Association urged the organization to support legislation toward that end.

Harvard law professor emeritus Alan Dershowitz went so far as to tell an interviewer that “the state has the power to literally take you to a doctor’s office and plunge a needle into your arm.”

Then, there was the less-intrusive question of masks. Initially, Fauci opined that masks did little good and should mainly be worn by health care providers. But soon, the CDC changed its guidelines urging that we all wear cloth coverings in public places. Most of us went along. Better safe than sorry, after all. We wanted to do our part.

But voluntary submission wasn’t enough for our would-be overlords. Many urged the passage of legal mandates. In a co-authored New York Times op-ed, Emanuel—sniffing that “face mask compliance this side of the Pacific has been uneven”—urged that wearing masks be made mandatory.

To avoid a popular “backlash,” Emanuel implored our neo-patrician entertainment celebrities, sports stars, and politicians to model mask-wearing as a means of normalizing it among us plebeians. Some governors promptly saluted and issued mandatory “wear masks” orders.

Are these mask mandates medically necessary? According to the latest “science,” for most of us, it would seem not, most of the time. For example, a report recently published by the New England Journal of Medicine discussing masking in the health care facility context, also contained illuminating information about our general circumstances:

“We know that wearing a mask outside health care facilities offers little, if any, protection from infection. Public health authorities define a significant exposure to COVID-19 as face-to-face contact within 6 feet with a patient with symptomatic COVID-19 that is sustained for at least a few minutes (and some say more than 10 minutes or even 30 minutes). The chance of catching Covid-19 from a passing interaction in a public space is therefore minimal.”

Oops. Then, what might be the point of wearing masks when it is not an effective prophylactic? “Expanded masking protocols’ greatest contribution,” the scientist wrote, “may be to reduce the transmission of anxiety.”

The World Health Organization appeared to strike another blow against the necessity of imposing technocratic mandates when a WHO scientist stated that transmission by asymptomatic patients “is very rare.” That would mean that the number of potential transmitters of the virus at any given time is far lower than originally thought, which has great public policy implications.

Apparently, the technocratic class understood that potential, too. The next day, after much establishment screaming, the scientist took back her “very rare” characterization, now saying that about 16 percent of infected people are asymptomatic and “able to transmit the virus.” (WHO’s confusion—another WHO “expert” said, “There is much that is not known”—doesn’t change the point of this essay, but it does raise the question of whether we can trust “the experts,” considering the part played by political pressure in such pronouncements. But that is a question that will have to wait for another essay.)

These shifts in—and befuddled utterances about—our scientific understanding should staunch the drive for technocratic mandates. Our leaders don’t rule. They govern. Other than in circumstances of close personal contact over extended time in health care facilities and other risky places, legally requiring masks—when it provides scant prophylactic benefit—would be merely to harness the power of symbolism as an outward manifestation of obedience to the technocratic order. That isn’t a proper purpose of public policy.

Fauci must go. He was one of the masterminds of this PLANdemic as far back as 2017 if not before. Either Trump is clueless about Fauci’s deception or Trump is in on the deception. If it’s the former, someone needs to tell Trump the he and the nation are being played by Fauci and friends. Birx needs to be shown the door too. If anyone reading this knows how to access Trump personally, tell him to call former senator Ron Paul. Ron Paul is a medical doctor who can educate Trump on the virus and how Fauci has spewed lies… Read more »

Technofascist you must show us the way.

It’s impossible that Trump doesn’t know. He knows RFK Jr. The best we can hope for is that for some reason the timing is not right to expose this horrific crime.

Trump won’t get re elected,many will sit home knowing this country will never recover economically and having unelected Fauci running things is a psyops to control the sheeple. It is over folks, America is over, only small number will try ti revolt : https://www.youtube.com/watch?v=UiaUjTWAXho

Fauci is a wolf in sheep’s disguise, he is under bill gates payroll and will do what he says. He needs to step down.

The solution is at http://www.nutrimedical.com First line of defence kit.

If Dr. Fauci told the truth about anything I wouldn’t believe him. Some folks seem to forget that once you violate someone’s trust. It’s hard if not impossible to gain it back. Dr. Fauci may be knowledgeable about infectious diseases. But I doubt that he is honest with the public about his medical assessments on any given day.