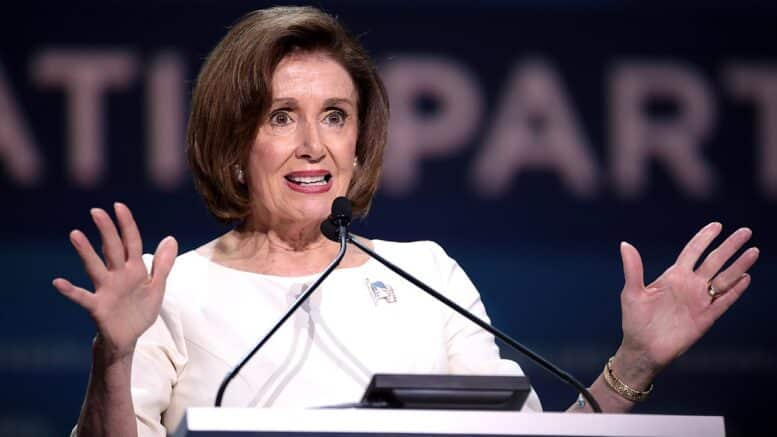 Please Share This Story!
PDF 📄
When the Great Panic of 2020 started, TN said to watch for stimulus money to be spent on Green New Deal programs to snap the world into Sustainable Development, aka Technocracy. Thus far, global stimul

On Wednesday, the House of Representatives passed a massive $1.5 trillion infrastructure bill packed with Democrats’ climate wish-list items. Democrats passed the bill 233-188 on a mostly party-line vote. Much of the funding tied to actual transportation measures — $500 billion — is tied to green measures requiring states to set targets for reducing greenhouse gas emissions and preparing for mitigation as if an unspecified climate catastrophe were on the immediate horizon.

“Predictably, this is what follows the federal government’s decision to forcibly shut down large sections of the economy and then spend massive, unprecedented amounts of money for compensation. The concept of fiscal responsibility no longer exists in Washington, D.C., even to a small degree,” James Taylor, president of the Heartland Institute, said in a statement on the bill.

“This partisan Democratic wish list of leftist priorities treats the American economy as if it runs on Monopoly money. Not only is this bill partisan and divisive, but it would dramatically and needlessly accelerate the financial ruin of this country,” Taylor added.

Myron Ebell, director of the Center for Energy and Environment at the Competitive Enterprise Institute (CEI) compared H.R. 2 to a “Green ATM” for the “climate industrial complex.”

“Included in H. R. 2’s hundreds of billions of dollars of wasteful spending is what amounts to a Green ATM, which would use taxpayer dollars to provide full funding for every aspect of the climate industrial complex. The Green ATM would provide more handouts for wind and solar energy, which have already received handouts for decades; for purchasing electric vehicles, whose buyers are at the top end of the income scale; and on and on,” Ebell said. “The Green ATM even has grants for university environmental justice programs. None of this spending will do anything to speed up economic recovery.”

House Speaker Nancy Pelosi’s (D-Calif.) decision to stuff an infrastructure bill full of Green New Deal climate wish-list items should not surprise Americans, given her recent attempts to take advantage of the coronavirus crisis. Her coronavirus stimulus bills were chock-full of her own far-left agenda items on vote-by-mail, LGBT financial literacy, collective bargaining for unions, a $15/hour minimum wage, and — of course — mandates for airlines to report the exact amount of carbon emissions on every flight beforehand.

Presumptive Democratic nominee Joe Biden hailed the coronavirus crisis as a “wake up call” for climate change and an “opportunity” for institutional change.