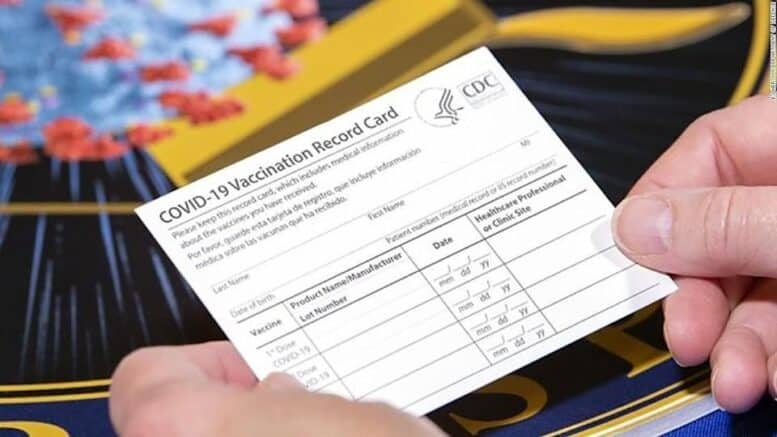 Please Share This Story!
PDF 📄
Even a blind person could see that the only purpose to track vaccinations is to identify the unvaccinated. Technocrats have turned the unvaccinated into an enemy that must be dealt with by physical means. Today that could be fines, quarantines and criminal records. Tomorrow, it could mean mass expulsion and even genocidal purging. Tyranny never retreats on its own; it must be forcefully pushed back and definitively conquered. ⁃ TN Editor

Eighty House Republicans voted with Democrats on Tuesday to pass the Immunization Infrastructure Modernization Act, which if passed by the Senate and signed into law would fund a federal vaccination database.

According to the bill, also called  H. R. 550, the government would provide $400 million in taxpayer dollars to fund “immunization system data modernization and expansion,” a system otherwise defined as “a confidential, population-based, computerized database that records immunization doses administered by any health care provider to persons within the geographic area covered by that database.”

The text specifically outlines an expansion of Centers for Disease Control and Prevention (CDC) and Public Health Department capabilities and the ability for state and local health departments, as well as public and private health care providers, to share health data with the federal government.

In a statement, the bill’s main sponsor, Democrat Rep. Ann Kuster (NH), said the system would be used to “remind patients when they are due for a recommended vaccine” and identify areas with low vaccination rates to “ensure equitable distribution of vaccines.” Notably, the bill has four Republican co-sponsors: Reps. Larry Bucshon (R-IN), James Baird (R-IN), David McKinley (R-WV), and Brian Fitzpatrick (R-PA). Not one Democrat voted in opposition to the bill.

Rep. Mary Miller (R-IL), who was one of the 130 Republicans to vote “no,” told Breitbart News exclusively on Wednesday that the legislation would enable the federal government to “track” unvaccinated Americans who “will be targeted and forced to comply with Biden’s crazy ‘global vaccination’ vision.”

“These systems are designed to allow for the sharing of crucial information and maintenance of records. Do we really trust the government to protect our medical records?” Miller said. “The bill’s author even bragged in her press release that these systems will help the government remind patients when they are due for a recommended vaccine and identify areas with low vaccination rates to ensure equitable distribution of vaccines. This was clearly a legislative tool to enforce vaccine mandates and force their Orwellian rules onto those who do not comply.”

Rep. Byron Donalds (R-FL) also voted “no” on the bill, citing “Democrats’ habitual pattern of reckless and wasteful spending” in an exclusive statement to Breitbart News. The congressman said the legislation only serves to expand the power of the federal government and trample individual rights.

“This legislation would unnecessarily appropriate millions of taxpayer funds intended to expand bureaucracy in Washington. A database solely created to record and collect confidential vaccination information of Americans explicitly encroaches upon individuals’ fundamental right to medical privacy,” Donalds said. “As a fiscal conservative, I cannot in good faith support legislation that contributes to the Democrats’ habitual pattern of reckless and wasteful spending and the intrusive heavy hand of government.”

Miller noted that the legislation paves the way for the government to give blue states millions in taxpayers funds to enforce vaccine mandates. According to the bill’s text, the government could award grants and cooperative agreements to health departments or other local governmental entities for agreeing to adopt the new data collection guidelines set by the CDC. Any agencies hoping to receive a grant must agree to comply with security standards to protect personal health information.

“…The government has become so large, you cannot expect them to keep anything private anymore. There is hardly any congressional oversight into studies these agencies conduct,” she added.

Kuster is urging the Senate to quickly pass the legislation, saying the pandemic showed just how underprepared the country’s “vaccine infrastructure” is. She emphasized that the legislation would help better prepare healthcare systems for “future public health crises.” She said in part:

COVID-19 pulled back the curtain on our vaccination systems and highlighted the urgent need for upgrades. I’m proud the House passed my bipartisan Immunization Infrastructure Modernization Act to expand the enrollment and training of vaccine providers, update public health information technology to efficiently manage vaccine supply, and allow patients and providers to communicate securely in real-time.

Miller contended that the government has “no reason” to collect more vaccination data on Americans.

Patrick Wood is a leading and critical expert on Sustainable Development, Green Economy, Agenda 21, 2030 Agenda and historic Technocracy. He is the author of Technocracy Rising: The Trojan Horse of Global Transformation (2015) and co-author of Trilaterals Over Washington, Volumes I and II (1978-1980) with the late Antony C. Sutton.
Subscribe
31 Comments
Oldest
Newest Most Voted
Inline Feedbacks
View all comments

View this video. It went viral in the EU and has only recently been subtitled for English speakers. It’s the kill shot of information. Please watch it to the end. The doctor reaches the summit of his presentation by making definitive statements that should be heard. He supports the Spanish study but because of his expertise, education and experience in several disciplines such as chemistry he was able to extract the primary cause of those who are dropping dead in front of us. Dr. Noack was murdered within 24-hrs of this video going viral in Austria/EU. He died to provide the public with… Read more »

Yes this is truly horrible information, and it is all true. Graphene has been found in all sealed vials in Japan as well as in this Spanish study. The global genocide, starting with the extermination of European formerly Christian peoples and their atheist nations “to be annihilated,” follow the warnings of Fatima. Watching the wife of Andreas I was reminded almost word for word of the woman and her offspring, the story of the innocent Son of God and Son of Mary abruptly murdered, leaving his Body and Blood behind for us to consume. These are the end times and… Read more »

“Follow the warnings of Fatima?” I would say not! I recommend this audio drama for all: http://www.thecomingglobaltransformation.org/ It is about the ‘Coming Global Transformation.’

The Progressive Commies sure want to pass a lot of bills and mandates before the 22 elections, is this to ensure that they can’t lose in 22. making it illegal for any non vaccinated person to vote.

Thank you, Patrick, for your long dedication (going back so many years) as THE leading voice on understanding the ‘totalitarian tiptoe’ of technocracy. This article (with the short Sheriff Hathaway clip) is very important info that is accessed by only a very small % of the population. It meaning and significant is ominous and obvious. It is noteworthy that 100% of the Dems voted in favor of this legislation. In the words of the bill’s (HR 550) main sponsor: “remind patients when they are due for a recommended vaccine” and identify areas with low vaccination rates to “ensure equitable distribution… Read more »

There is nothing confidential about my private medical information being used by big government. It’s against my fourth amendment rights and intercedes between the doctor patient relationship!

The Pharmedical mafia governing the U.S. is going to need these shot stats to implement the passport program. How else will they be able to determine if a person is an “undesirable”?

These totalitarian initiatives have multiple purposes. Identifying the unvaxxed for extermination and identifying the vaxxed for ENSLAVEMENT. Remember that the Supreme Court has ruled that you can patent ‘alterations’ to nature. Every single vaxxed and boosted person out there, who signed a release to accept mRNA tech into their body, has knowingly or unknowingly made themselves a slave, a piece of property, with all their property (and children) to be “harvested” by their new owners since they signed away all property rights when the accepted the injection. I wonder if Bill Gates wrote his name on their dna? Once they… Read more »

If Germany locks down the “unvaccinated,” can the USA/EU be far behind? – NEWS FROM UNDERGROUND

If Germany locks down the “unvaccinated,” can the USA/EU be far behind? - United Push Back

[…] So called “anonymous databases” have to be tied to an actual person geographically. The idea that “it is anonymous” is ludicrous. With the flip of a “programming switch” they can see anyone just like they did with William Binney’s “anonymized system.” This is a key control mechanism of the globalists make no mistake.https://www.technocracy.news/hr-550-house-passes-bill-to-fund-federal-vaccination-database/ […]

[…] Eighty House Republicans voted with Democrats on Tuesday to pass the Immunization Infrastructure Modernization Act, which if passed by the Senate and signed into law would fund a federal vaccination database. According to the bill, also called  H.R. 550, the government would provide $400 million in taxpayer dollars to fund “immunization system data modernization and expansion,” a system otherwise defined as “a confidential, population-based, computerized database that records immunization doses administered by any healthcare provider to persons within the geographic area covered by that database.” The text specifically outlines an expansion of Centers for Disease Control and Prevention (CDC) and… Read more »

I know I’m a little late to the discussion here. Just opened this email today. It’s apparent to me and many others that technocrats and their bureaucratic cousins care nothing about anyone having once of good health besides themselves. For those of us who are blessed with the grace, knowledge from doctors and researchers who share the truth about medicines, treatments and natural remedies to have good health or healing. We have no need for any entity, at least demonic ones to control our health or our entire existence. I knew at since the start of the covid narrative that… Read more »

We’ve reached the singularity. Humans are no longer the top species on earth, AI is. We are now viewed as excess inventory that is no longer needed. We are a liability on a balance sheet. These “people” view themselves as superior beings and that we are basically a plague of insects consuming resources they believe belong exclusively to them. They hate us. I’m fairly convinced these technocrats have already connected their brains to AI and that is why the agenda is so horrifically anti-human. Not a one of them has an ounce of guilt about destroying lives.