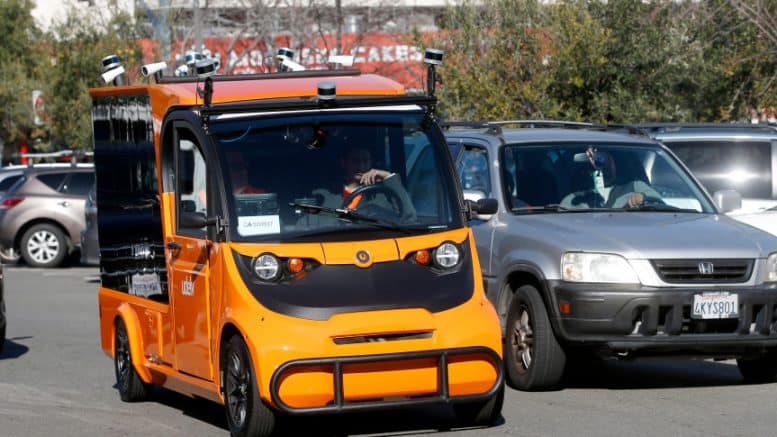 Early adopters will have plenty of issues to deal with, but the rapid increase of automous vehicles will be totally disruptive to society and the labor market as a new class of ‘unemployables’ develops. This is the reason behind calls for “Universal Basic Income.” ⁃ TN Editor

A Bay Area tech company is claiming the world’s first delivery of goods by a self-driving car on public roads, after its electric cargo truck carried groceries from the posh Draeger’s grocery store in San Mateo to two nearby locations Tuesday.

Udelv plans to use its single automated vehicle — which requires a backup driver as per state law — to start regular deliveries to customers of the San Mateo Draeger’s store after mid-February. But the Burlingame company has higher ambitions: It hopes to have 1,500 of its vehicles on the road by 2021 and it wants to work with major firms involved in delivery such as store chains, Amazon and UPS, Laury said.

“This new machine is a revolution for retailers, shippers and delivery companies,” Laury said.

Udelv is targeting a lucrative market — McKinsey in October put the global cost of package delivery at more than $85 billion. But considerable obstacles remain for companies scrambling to use road-going robots to grab a piece of the pie.

For Udelv, technological, infrastructure and regulatory limitations mean the startup’s technology is more a first step than an ultimate solution to the problem of so-called “last-mile” delivery from businesses to consumers, said Gartner analyst Michael Ramsey.

“I love the technology,” Ramsey said. But he added, “I feel like at this point it’s kind of like … a very complex solution to a fairly simple problem.”

Instead of a robotic vehicle, a company could just hire someone for $15 an hour to make five or six deliveries per hour, for a cost of only about $3 per delivery, Ramsey said.

Actual cost savings could come when regulations allow for fully autonomous vehicles on public roads with no backup drivers, he noted, but it’s unclear when the federal and state governments may permit that.

Also, Udelv’s deliveries require the customer to meet the vehicle at the curb, where they use a mobile app to open the compartment holding their groceries. That means someone has to be home when the delivery occurs, Ramsey pointed out.

One possible solution would be curb-side boxes where a delivery vehicle can pull up and deposit goods, he said.

Udelv’s truck has 18 compartments in four different sizes, and a 60-mile range, so it can make deliveries to 18 different sites on one trip, Laury said. Top speed is 25 miles per hour, with a 700-pound carrying capacity.