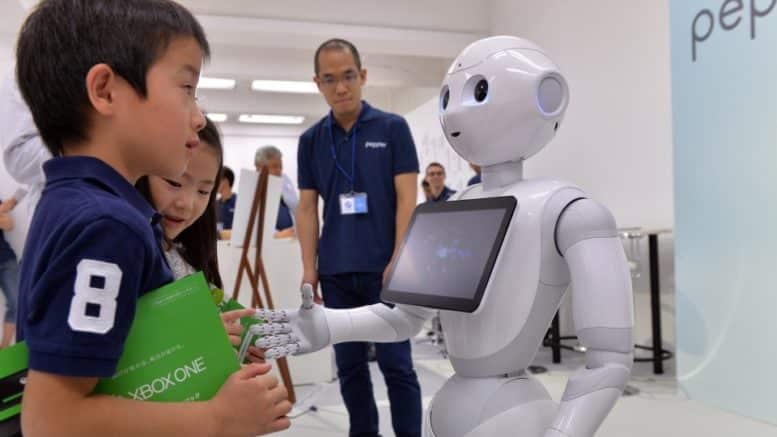 Please Share This Story!
PDF 📄
Humans already have a strong emotional tendency to transfer attachment to inanimate objects. If robot makers exploit this tendency, then robot owners may have no idea they are being led into an emotional addiction. ⁃ TN Editor

When a robot “dies,” does it make you sad? For lots of people, the answer is “yes” — and that tells us something important, and potentially worrisome, about our emotional responses to the social machines that are starting to move into our lives.

For Christal White, a 42-year-old marketing and customer service director in Bedford, Texas, that moment came several months ago with the cute, friendly Jibo robot perched in her home office. After more than two years in her house, the foot-tall humanoid and its inviting, round screen “face” had started to grate on her. Sure, it danced and played fun word games with her kids, but it also sometimes interrupted her during conference calls.

White and her husband Peter had already started talking about moving Jibo into the empty guest bedroom upstairs. Then they heard about the “death sentence” Jibo’s maker had levied on the product as its business collapsed. News arrived via Jibo itself, which said its servers would be shutting down, effectively lobotomizing it.

“My heart broke,” she said. “It was like an annoying dog that you don’t really like because it’s your husband’s dog. But then you realize you actually loved it all along.”

The Whites are far from the first to experience this feeling. People took to social media this year to say teary goodbyes to the Mars Opportunity rover when NASA lost contact with the 15-year-old robot. A few years ago, scads of concerned commenters weighed in on a demonstration video from robotics company Boston Dynamics in which employees kicked a dog-like robot to prove its stability.

Smart robots like Jibo obviously aren’t alive, but that doesn’t stop us from acting as though they are. Research has shown that people have a tendency to project human traits onto robots, especially when they move or act in even vaguely human-like ways.

Designers acknowledge that such traits can be powerful tools for both connection and manipulation. That could be an especially acute issue as robots move into our homes — particularly if, like so many other home devices, they also turn into conduits for data collected on their owners.

“When we interact with another human, dog, or machine, how we treat it is influenced by what kind of mind we think it has,” said Jonathan Gratch, a professor at University of Southern California who studies virtual human interactions. “When you feel something has emotion, it now merits protection from harm.”

The way robots are designed can influence the tendency people have to project narratives and feelings onto mechanical objects, said Julie Carpenter, a researcher who studies people’s interaction with new technologies. Especially if a robot has something resembling a face, its body resembles those of humans or animals, or just seems self-directed, like a Roomba robot vacuum.

“Even if you know a robot has very little autonomy, when something moves in your space and it seems to have a sense of purpose, we associate that with something having an inner awareness or goals,” she said.

Such design decisions are also practical, she said. Our homes are built for humans and pets, so robots that look and move like humans or pets will fit in more easily.

Some researchers, however, worry that designers are underestimating the dangers associated with attachment to increasingly life-like robots.

“Some researchers, however, worry that designers are underestimating the dangers associated with attachment to increasingly life-like robots.” Underestimating? Is it not a known fact that the object of programming a robotic and the goal of the outcome is getting stupid humans to attach to them? Well Duh! It’s a fact too that you can’t stop a person from ‘being’ stupid if that person wants to ‘do’ stupid–like love an inanimate object. Sad. The designers are doing what designers do. Their corporate masters’ goal is/has always been to create humanoid robots that entreat human attachment to an imagined life form–that is… Read more »