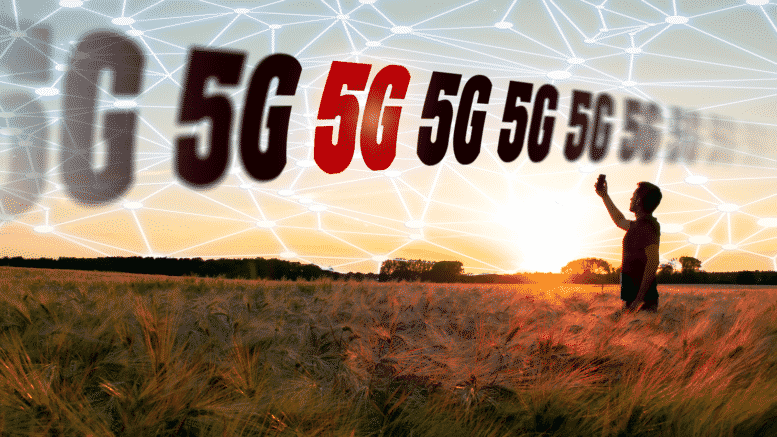 Posted By: Jeremy Loffredo via The Defender November 9, 2020

Technocrats are pursuing a fool-proof way to develop “precision agriculture’ with 5G technology that will implement an Internet of Things appropriate for managing our entire food/supply chain.

Aside from the harmful effects of EMF generated from 5G, technological control over food supplies could become an existential threat to large parts of the world. ⁃ TN Editor

FCC’s new fund includes money for precision agriculture that opponents say is more about commodification and control of information than better farming.

The Federal Communications Commission (FCC) last week established the 5G Fund for Rural America. The fund will hand over billions of dollars worth of taxpayer money to the world’s largest telecom providers. In exchange, the telecom giants will build 5G infrastructure in rural regions of the U.S. — including the infrastructure needed for 5G or wireless farming, also known as “precision agriculture.”

Precision agriculture involves the use of sensors in fields to measure moisture and temperature levels, satellites and drones that provide remote real-time images of crops, and even wireless sensors attached to cattle that monitor their health and track their location.

Proponents of precision agriculture see it as a path towards increased profitability, sustainability and the ability for farmers to determine the exact optimal amount of water, fertilizers or pesticides.

But critics say it’s simply a “marriage between agribusiness and spy technology.”

“Precision farming is about commodification and control of information and it is among the high-tech tools that are driving the industrialization of agriculture, the loss of local farm knowledge and the erosion of farmers’ rights,” Hope Shand, research director for ETC Group, told CorpWatch.

Global Research, in its report, “5G Agriculture – Food from Frankenstein Farming,” described “5G food” as a “GMO look-alike” and concluded that 5G agriculture “is just one more toxic scam within the egregious global roll-out of 5G — and its attempt to monitor, control and irradiate all that lives, breathes and has the expectation of a life worth living.”

The 5G fund follows in the steps of a smaller U.K. initiative called “5G Rural First,” where the U.K. government gave Cisco £$5.5 million ($7.1 million) to “[run] a number of different 5G experiments in rural areas” across the country.

Both 5G Rural First and the new U.S. 5G Rural Fund are dependent on the Internet of Things (IoT) devices to support communication between the farm and the rest of the world. The IoT involves an exponential increase in devices connected to the internet — broadening the domain of internet connectivity from phones and computers, to everything — heaters, dishwashers, home security systems, self-driving cars, refrigerators, traffic lights, trash cans, water systems, “smart roads,” and yes, even diapers.

This expansion of internet-connected items needs 5G to facilitate the speed and higher bandwidth capacity transmission required to carry all of the data, according to the FCC. “5G will help enable cutting edge applications … [like] the Internet of Things and other novel ideas we can’t conceive today,” said FCC Chairman Ajit Pai while announcing the FCC’s 5G Fast Plan.

But in addition to contributing to increased wireless radiation exposure, 5G precision agriculture has the potential to extract unprecedented amounts of valuable data, opponents argue. This means that in addition to health risks, 5G rollouts bring a new era of surveillance and potential abuse by governments and corporations with this data.

“These technologies could lead to rapid integration of data and provide near-continuous, persistent monitoring of virtually anywhere we choose,” said former-CIA Director David Petraues about the IoT in 2012. In 2016, then-Director of National Intelligence James Clapper explained that, “in the future, intelligence services might use the loT for identification, surveillance, monitoring [and] location tracking …”

The 5G Fund for Rural America comes amidst a nationwide push for building the country’s 5G infrastructure. In June, AT&T expanded its low-band 5G coverage and in September, T-Mobile boosted its mid-band 5G coverage. In October, after Verizon’s plan to rely on millimeter waves for its 5G failed and the company changed its strategy to use its 4G LTE network (DSS 5G), which enabled it to expand its 5G service quickly, Verizon officially announced a nationwide 5G network. At the same time, the telecom giant launched its “Verizon 5G Home.”

The recent FCC order is the actualization of what the U.S. has long advertised 5G would be from the very beginning.

“We must reject any notion that the 5G future will be the sole province of urban areas,” declared then-FCC Chair Tom Wheeler in 2016. “The 5G revolution will touch all corners of this country.”

It’s a sick world and this nonsense needs to be stopped. It is absolutely provable via many scientific methods that we, humans, and everything in existence is energy–frequencies. There’s more than enough evidence that EMFs HARM humans (they can heal as well, but not in this current time on planet earth with the AMA/Corps/UN in control). This is not needed. Whatever 5G is touted to be, it is just a cover. What can be done to lifeforms via frequencies is truly unlimited, and only the ignorant do not understand this. This is basic life 101 and should be taught in… Read more »