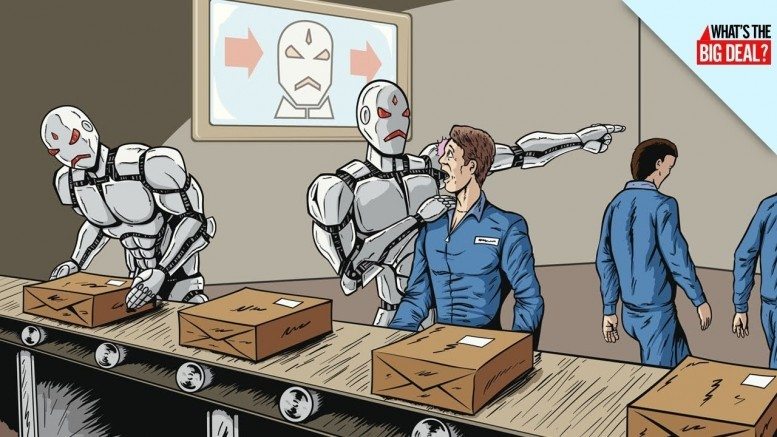 Please Share This Story!
PDF 📄
The road to scientific dictatorship, aka Technocracy, is paved with AI systems that tell humans what to do, how to do it and when to do it. Apparently, Chinese workers like it this way.

The author of Brave New World, Aldous Huxley, said, “A really efficient totalitarian state would be one in which the all-powerful executive of political bosses and their army of managers control a population of slaves who do not have to be coerced, because they love their servitude.” ⁃ TN Editor

The main worries surrounding artificial intelligence (AI) and its future is how one day, it’ll prove to be the biggest job-killing technology of all-time, or worse even, the autonomous bots will group together and wipe out the human race completely.

We’re still waiting for hard evidence on how this might happen, but meanwhile in China, a study found that 88 percent of workers have more trust in robots than their human managers.

The study, which was published on Tuesday by the US software company Oracle and the research firm Future Workplace, polled 8,370 employees, managers, and human resources workers in 10 countries from July to August of this year.

Its findings revealed that China’s trust level of robots in the workplace is well above the global average, with about two thirds of workers admitting they feel optimistic about having a robot co-worker.

“Over the past two years, we’ve found that workers have become more optimistic as they’ve adopted more AI in the workplace,” Dan Schawbel, Research Director at Future Workplace said in a statement. “This study shows that AI is redefining not only the relationship between worker and manager, but also the role of a manager in an AI-driven workplace.

Based on the findings, managers will remain relevant in the future if they focus on being human and using their soft skills, while leaving the technical skills and routine tasks to robots.”

While being optimistic about AI entering the workforce isn’t necessarily unfounded, the study did show a trend that might prove problematic: 26 percent of participants trust AI to offer unbiased information.

AI is created and trained by human developers, and the global software developer industry is currently made up of just 27.5 percent women. As women are grossly underrepresented in the tech industry, it’s inevitable that AI testings are at risk to gender bias.

We’ve already seen this happen with the industry-leading voice assistants including Apple’s Siri and Amazon’s Alexa.

These assistants were given female names and voices by default and made to be of assistance, which perpetuates the harmful gender bias that suggests women should be there to assist rather than be assisted.

However, we’ve also seen AI work to tackle gender bias in the workplace. Textio, an AI-powered writing-enhancement service that analyzes job descriptions, helps employers and HR professionals to write gender-neutral job ads by highlighting words and phrases that would deter women from applying.

For example, a job ad would be considered more ‘masculine’ if it included words like ‘ninja,’ ‘competitive,’ and ‘dominate.’

This reminds me of the I-Robot film: https://en.wikipedia.org/wiki/I,_Robot_(film) But truly, “And God said, Let us (Father, Son, Holy Spirit) make man in our image, after our likeness: and let them have dominion over the fish of the sea, and over the fowl of the air, and over the cattle, and over all the earth, and over every creeping thing that creepeth upon the earth.” Genesis 1:26. This is before Adam and Eve sinned. They decided to be gods themselves knowing good and evil through the lie of Satan (Genesis 3:5). Now Satan is still busy telling people they will be… Read more »

These are masculine words? I was completely unaware of that. I can only guess that those men/women involved in attempting to create the future AI overlords have never known a Scottish or Irish female descendant. ALL the words apply.