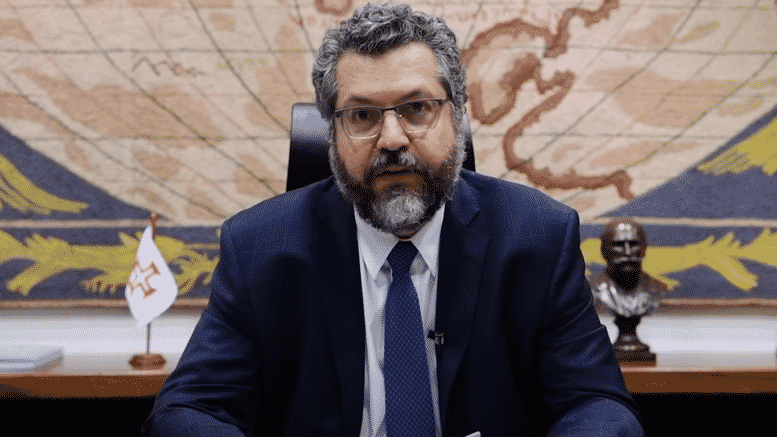 Posted By: Tim Hinchliffe via The Sociable January 7, 2021

Please Share This Story!
PDF 📄
Brazil’s top leadership understands the threat of Technocracy and rejects the World Economic Forum’s intended Great Reset. As a result, its Administration is fighting attack hornets from all sides who are trying to drive them out of power. ⁃ TN Editor

Brazil’s minister of foreign affairs says “no” to the World Economic Forum’s (WEF) proposed “great reset” agenda, telling the United Nations (UN) special session on COVID-19 that “totalitarian social control is not the remedy for any crisis.”

“Those who dislike freedom always try to benefit from moments of crisis to preach the curtailing of freedom. Let’s not fall for that trap” — Ernesto Araujo

On December 3, Brazil’s Minister of Foreign Affairs Ernesto Araujo rebuked the WEF’s technocratic “great reset” of society and the global economy in a recorded speech before the special session of the UN.

Although Araujo did not say the words “great reset” or “World Economic Forum” during his speech to the UN, he made it abundantly clear in a tweet the following day that he was referring to the “great reset” agenda in his speech.

The “great reset” is the brainchild of WEF Founder Klaus Schwab, who has been planning the technocratic agenda to reset all of society and the global economy for many years.

Brazil is now pushing back against the great reset.

“Brazil is a founding member of the UN, and hence, is committed to its basic principles: peace and security, cooperation among nations, respect for human rights, and fundamental freedoms,” Araujo told the UN.

“COVID-19 must not be taken as a pretext to advance agendas that extrapolate from the constitutional structure of the UN system,” he added.

The Brazilian minister went on to say, “Fundamental freedoms are not an ideology. Human dignity requires freedom as much as it requires health and economic opportunities.

“Those who dislike freedom always try to benefit from moments of crisis to preach the curtailing of freedom. Let’s not fall for that trap.

“Totalitarian social control is not the remedy for any crisis. Let’s not make democracy and freedom one more victim of COVID-19.”

In April, 2020, he wrote that “globalism replaces socialism as a preparatory stage for communism,” and he referred to the coronavirus as the “comunavirus” after reading a recent booklet by Slovenian philosopher and communist Slavoj Zizek, from which he extrapolated that viruses were beneficial for spreading communism.

The Brazilian minister of foreign affairs was a controversial pick by President Jair Bolsonaro, partly due to Araujo’s belief that climate science was a “dogma” being used “to justify increasing the regulatory power of states over the economy and the power of international institutions on the nation states and their populations, as well as to stifle economic growth in democratic capitalist countries and to promote the growth of China,” The Guardian’s global environment editor Jonathan Watts wrote in November, 2018.

Araujo’s views that climate change science and globalism are vectors for spreading Marxist ideologies, along with his pro-nationalistic beliefs, have not won him many allies on the international stage.

As a cabinet member of the Bolsonaro administration, he has received his fair share of criticism from the media, and his Wikipedia page currently says that he “subscribes to conspiracy theories.”

According to Watts, Bolsonaro chose a “foreign minister who believes climate change is part of a plot by ‘cultural Marxists’ to stifle western economies and promote the growth of China.”

However unpopular among globalists, climate change activists, and the media Araujo may be, when he said “no to the great reset,” in his words he was rejecting the exploitation of the coronavirus crisis to further an agenda set by those who “preach the curtailing of freedom.”

What a breath of fresh air amongst the fog of lies clouding skies all over the world.

Hopefully other S. Amer. countries will wake up and oppose the WEF. I am keeping up w/ WEF ‘s website and they are pushing for a reset.