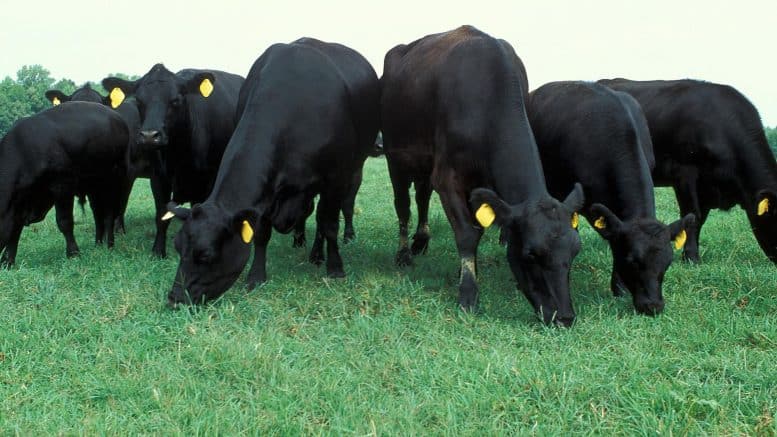 Cattle have been demonized by environmental radicals as ‘unsustainable’, carbon belchers and wrecking the environment. To their chagrin, the exact opposite has been demonstrated in practice. Cattle are highly beneficial to the ecosystem while proving an excellent source of protein. ⁃ TN Editor

Carbon ranching is coming to Santa Barbara, but farmers aren’t growing carbon — they’re putting it back into the ground. With the help of compost and cattle, native grasses can sequester organic carbon, enriching the soil and removing greenhouse gases from the atmosphere.

For example, a single acre of grazed grasslands in Santa Barbara can remove the equivalent of 3.9 tons of CO2 each year by using a compost application plan outlined by the California Department of Food and Agriculture.

According to the Community Energy Council of Santa Barbara, 270,000 acres in the county are suitable for compost application. Even if only 15 percent of the available land received a single dusting of compost, their analysis “shows that the increased sequestration could offset all of the greenhouse gas emissions from the county’s agricultural sector.”

For the farm managers, Russell Chamberlin and his cousin Mary Heyden, adding a top layer of compost enriches the soil, provides more food for their cattle, and helps their business adapt to a changing climate.

“Weather systems have changed dramatically, more and more every year,” said Heyden in an interview with the Santa Barbara Independent. “In this area, with compost, the land stays cooler and wetter,” growing more robust grasses.

Chamberlin worked and went to school in northern California, where carbon ranching via compost has been well tested. “Work in Marin on compost on rangeland had generated a lot of excitement and attention … I got interested in making the ranch a learning site for these practices,” he said in an interview with the Santa Barbara Independent.

The Marin Carbon Project was started by a ranch owner whose pastures turned into a weedy mess after his cattle stopped grazing. After successful results from returning cattle herds to the farm, the owners began investigating other ways to enrich the soil and bring back native grasses, including carbon ranching via compost coverage. In a test area covered with compost, they found 45-50 percent more carbon was sequestered compared to the control area.

Adding compost greatly increases carbon sequestration, but it has other benefits that farmers are more concerned with. Soil in compost-covered areas stays cooler and holds more water than untreated areas, extending the grass growing season, reducing the need for irrigation, and providing more food for cattle.

While herds of cattle do benefit from the increased forage that compost provides, their presence is an essential part of increasing carbon sequestration.

Cows on the test plots at Chamberlin Ranch were only kept there long enough to eat a small portion of the grass, instead of heavily grazing as they usually do. Their hooves trample grass, packing it down and matting together a shade-producing layer to keep direct sun off the ground.

With this technique, Chamberlin claims results have shown an increase in native perennial grasses, which have deeper roots and sequester more carbon than non-native, annual grasses.

To cover the test areas, compost is brought in on a truck and sprayed through a hose, forming a quarter-inch blanket over the grass below. Even at only one-quarter-inch thick, it takes about 34 cubic yards of compost to cover one acre.

Offsetting the greenhouse gas emissions of countywide agriculture by covering 40,000 acres would require over 1.3 million cubic yards, more than three times the amount that the area’s certified supplier can produce, according to the Santa Barbara Independent.

However, the Tajiguas Landfill along the Gaviota coast (west of Isla Vista) may be able to provide the necessary compost. Santa Barbara County plans to use an anaerobic digester to generate electricity from the methane produced by organic matter at the landfill, but that plan has been delayed multiple times and has still not broken ground.

Sigrid Wright, CEO and Executive Director of the Community Energy Council, argues that using the organic matter at the Tajiguas Landfill “is a higher and better use” than the digester. “Compost would simply be a better use of what remains of the landfill’s lifetime,” said Wright in an interview with the Santa Barbara Independent.

Government agencies, research institutions, and partners in the agriculture industry are still testing to find the most efficient ways of carbon ranching on a large scale, but there are methods proven to work on small patches of land.

“Larger swathes of land allow for greater sequestration potential and GHG reduction, but any size property will sequester carbon and reduce GHG emissions,” said Anna Olsen, Director of the Cachuma Resource Conservation District, in an email to The Bottom Line. Additionally, tools like COMET-planner and compost-planner outline various carbon ranching techniques and estimate the greenhouse gas offset for each practice.