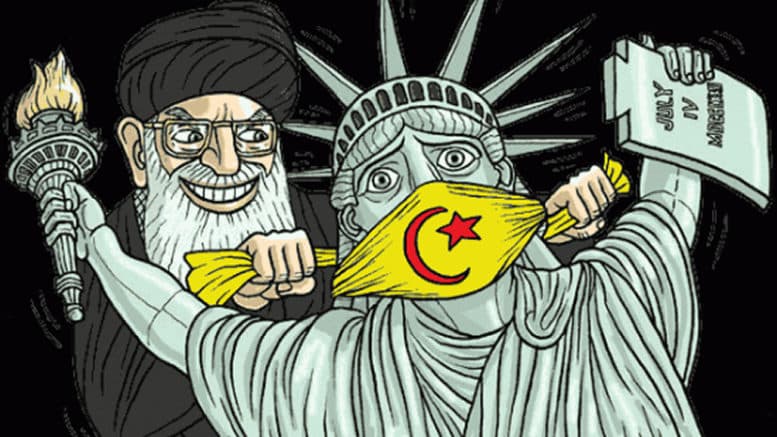 Please Share This Story!
PDF 📄
Forcing compliance requires muzzling your speech, whether its shadow-banning, censorship, label lynching or faux hate-speech. The only practitioners of censorship are autocrats and in most cases, Technocrats. This dangerous trend is producing many martyrs who pay with their very life. ⁃ TN Editor

The European Court of Human Rights ruled that criticism of Muhammad constitutes incitement to hatred — meaning that in Europe, criticizing Muhammad is no longer protected free speech.

What the court has actually done, however, is rule out the possibility of any debate in which a range of various experts and members of the public could take part. Now, it seems, the only views that will be respected in the public forum are those of devout Muslims.

Underage marriages are considered by some countries child abuse or statutory rape, but are acceptable under shari’a law; they also take place in Muslim communities in Western countries such as the UK. This alone is a major reason why platforms must be found to debate the issue instead of sweeping it, as something offensive, under the carpet. Ignoring it is offensive.

Moreover, as some Muslims are often offended by even small matters regarding their faith, such as a toy teddy bear named Mohammad or a prisoner on death row declared innocent — so that mobs take to the streets to condemn, or even kill, those individuals — what now will not be censored in the West?

There are, of course, social settings where it pays to watch your words. Saying you fancy the looks of a mafioso’s new girlfriend could well prove fatal. Spending time with a bunch of Hamas terrorists while expressing your love for Israel might not lead to your premature demise. In London today, young men who make remarks or play music to other youths on the street can wind up stabbed to death. A recent comment on The Independent website claims, “In this country [the UK], some views, regardless of how valid and logical, can result in anything from public rebuke to loss of a job to violence.”

For the most part, we learn how to avoid words or actions that may offend someone or some group, especially if it is known to be prone to violence. Yet these misfortunes are rare and we live our lives on the assumption that in democratic countries, we can speak freely within the norms of civil society. We recognize that in many countries, racist, homophobic, antisemitic, or “Islamophobic” hate speech can be reported to the police and lead to the arrest and eventual trial of the speaker. The United States’ First Amendment to its Constitution protects its citizens from prosecution for free speech, except where there is a credible threat of “Imminent lawless action.”

If angry exchanges take place, they are just a consequence of living in countries where free speech and unfettered opinion are cherished. We have seen what happens in countries where there is no free speech –as the Soviet Union or present day Pakistan (here, here and here); it often is not pretty and in much of the West is regarded as well worth the trade-off.

Particular sensitivities surround religious ideas, and histories. Nowhere is this more apparent today than in the instance of Islam, where anything untoward, especially statements that even a few people may consider blasphemous — such as young schoolchildren naming a toy teddy bear Mohammad, a common enough name in the Sudan — might be treated as criminal offences. In the West, within secular democratic states, most churches mercifully appear no longer interested in controlling matters such as blasphemy. When I lived in the Irish Republic in the 1960s and early 1970s, the Catholic Church held a tight grip on society. Books were banned, including by James Joyce, D.H. Lawrence and all of Sigmund Freud. Films and plays were also banned or censored. The intolerant ban on Catholicsstudying at Trinity College Dublin perpetuated injustice. Since the 1960s, however, we now have same-sex marriage, women’s right to abortion, and an openly gay Taoiseach (Prime Minister). This year, on October 6, a majority of the Irish voted in a referendum to abolish the blasphemy law that had been in its constitution since 1937. The country has liberalized remarkably.

Ironically, while Ireland’s 2010 blasphemy law was still technically on the books (although never actually implemented ), the 57-state Organization of Islamic Cooperation (OIC) – consisting of 56 mostly Muslim states plus “Palestine” — cited it in 2009 during an attempt to impose an international blasphemy law on the UN. Also in 2009, the government had passed a new Irish Defamation Act that contained a full definition of the blasphemy law (the one abolished this year). This vote took place during a committee meeting for the 13th session of the UN Human Rights Council. The proposal, made on behalf of the OIC by Pakistan, used the Irish definition:

38.1 States parties shall prohibit by law the uttering of matters that are grossly abusive or insulting in relation to matters held sacred by any religion thereby causing outrage among a substantial number of the adherents to that religion.

We do not know if the principal motivation for the OIC came less from a concern about religions that Muslims might consider entirely false, abrogated and inferior, such as Judaism or Christianity, or more from a concern that no one should be allowed to criticize Islam.

In any event, Ireland finally woke up to the injustice of its blasphemy law, and the damage it was doing to its growing reputation as a country purporting to observe human rights.