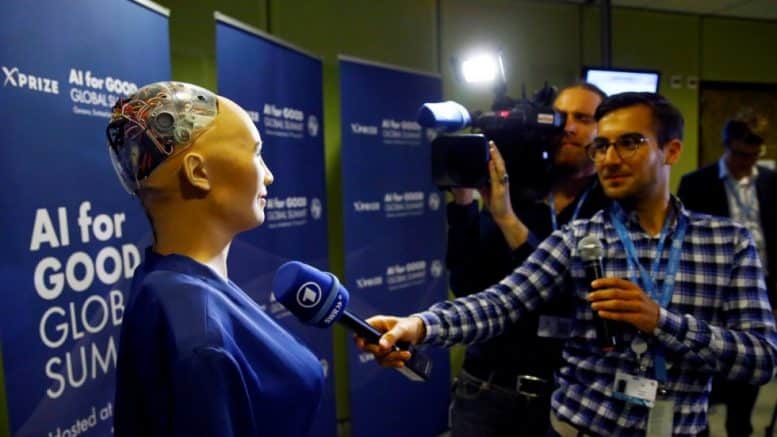 China has already emerged as the largest and most advanced Technocracy in the world, but it will solidity those advances with artificial intelligence. Essentially, AI will be used to operate the Technates (Smart Cities) and connect together various supply chains used in manufacturing and delivering goods and services. Social engineering will be fully automated. ⁃ TN Editor

China has vowed to become a world leader in artificial intelligence within a decade. The People’s Republic has revealed plans to spend billions on developing computers that are capable of thinking for themselves.

However, experts believe an AI version of the space race could be disastrous for the world and even lead to the creation of a digital destroyer that ends up wiping out humanity.

China wants to square up to Western market leaders including Google and Microsoft, who are racing ahead in the development of smart computers.

Rui said officials back AI because it is seen as the latest “industrial revolution” similar to the advent of the combustion engine, electricity or the internet.

“They see the fourth industrial revolution as coming, (and think) we better invest and support and build a very strong ecosystem,” said Rui.

China’s State Council said the “situation with China on national security and international competition is complex”, which was part of the incentive for making a domestic AI push.

“We must take initiative to firmly grasp this new stage of development for artificial intelligence and create a new competitive edge,” it said.

Earlier this year, a top thinker said careless researcher could accidentally bring about the end of humanity whilst battling to develop a super-intelligent artificial intelligence.

Nick Bostrom, head of the University of Oxford’s Future Of Humanity Institute, said that one slip up in the development of artificial intelligence (AI) could spell curtains for humanity.

“There is a control problem,” he said.

“If you have a very tight tech race to get there first, whoever invests in safety could lose the race.

“This could exacerbate the risks from out of control AI.”

Centralized control is a matter of “ownership”. Why would anyone knowingly give away their lives to be herded into cities, totally dependent on a technocracy that has only the interests of it’s developers in mind? Are the masses to become pet consumers, giving up their personhood? There are few self sustaining communities that could survive a technological collapse. In technology circles, this is known as low cohesion and high coupling which is the complete opposite of a well written system of any kind.

Past: Self-Sufficiency = The Individual. Future: Self-Sustaining = The Collective.