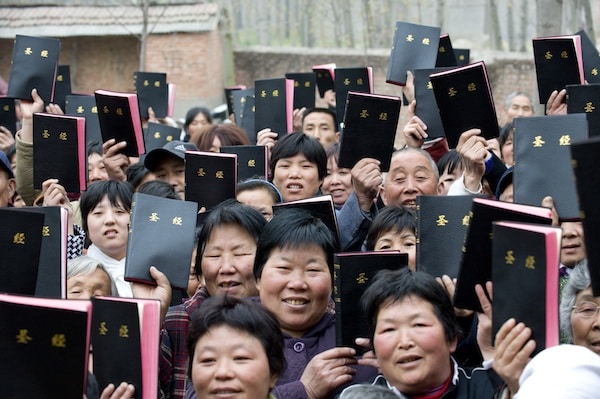 Please Share This Story!
PDF 📄
Technocrats view Christianity as ignorant, mythical, superstitious, illogical and even harmful, especially to Technocracy. It is not surprising that in China, Chairman Xi seeks to displace Jesus as the main figure of worship. ⁃ TN Editor

Chinese officials and residents in a rural area of Jiangxi province have revealed a government plan to “melt the hard ice” in the hearts of Christians towards communism by denying them pivotal poverty relief packages if they do not replace images of Jesus in their households with photos of President Xi Jinping.

One official stated that the move was necessary because Christians are “ignorant” and need to be taught to worship the state, not God.

The move is the latest in a string of crackdowns against Christianity in the Xi era. Xi’s regime views Christianity, which has experienced a popularity boom in the past decade, as a challenge to the supremacy of the Communist Party’s growing cult of personality around Xi himself.

The South China Morning Post first picked up on the social media posting that revealed the program, noting that the post showed someone replacing their Christian images with Xi Jinping’s official headshot and praised local Communist Party officials for having transformed locals “from believing in religion to believing in the party.”

The social media post tracked efforts in the town of Huangjinbu, in southeastern Jiangxi province. It claimed that up to 600 residents had “voluntarily” replaced their images of Jesus, resulting in 453 new photos of Xi hanging on living room walls.

The Washington Post, which also reported on the post, noted that Communist Party officials in Yugan county in Jiangxi, where Huangjinbu is located, had noted with panic the rapid growth of the region’s Christian population an expressed “a sense of crisis” about it in a regional meeting in October. This new effort may have been a result of brainstorming to solve the problem of more people believing in Jesus than communism.

The South China Morning Post confirmed the efforts with Qi Yan, identified as “chairman of the Huangjinbu people’s congress.”

“Many rural people are ignorant. They think God is their savior. … After our cadres’ work, they’ll realise their mistakes and think: we should no longer rely on Jesus, but on the party for help,” Qi told the newspaper. Some, he added, became Christians due to “illness in the family,” which the communists argue can only be cured through “the Communist Party and General Secretary Xi.”