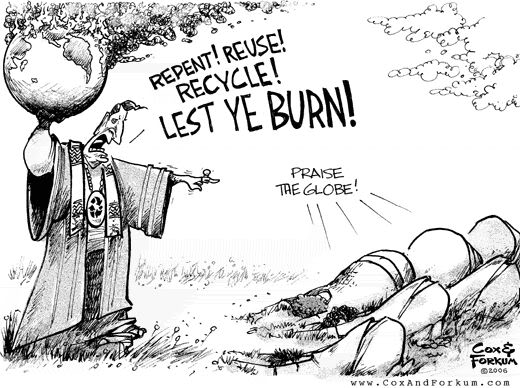 Please Share This Story!
PDF 📄
Global warming has more in common with a radical religion than with science. Legitimate scientists have thoroughly debunked climate alarmism but all such science is flatly rejected, even though it totally refutes alarmists’ conclusions. The only solution is to keep the green technocrat crowd out of public policy. ⁃ TN Editor

I recently had a conversation with Tony Heller from realclimatescience.com regarding the Global Mean Temperature Anomaly data set that used to prove that Global Warming is real. The term Climate Change never made sense to me and just the mere fact that the term changed from Global Warming should raise public skepticism. Heller’s criticism against the climate change narrative is straight forward.

The data does not have integrity.

Heller asserts that NOAA’s “temperature corrections” made the past look cooler than it is today, i.e. there is no warming to be concerned about at all. The raw thermometer readings from the past, uncorrected, are within variation of the warming that we see today. NOAA publishes the adjusted temperatures (in red below) as opposed to the unadjusted readings (in blue below).

By implication all the theories about the Greenhouse Effect, the Positive Water Vapor Feedback Loop, whether or not the Medieval Warm Period was warmer in the past, a local or global phenomenon does not make sense to even discuss. Tony’s view is that this is more of a fraud than a scientific challenge

Fraud in climate change science is unfortunately not uncommon. Following the climate gate emails in 2009, Stephen McIntyre from Climate Audit showed clearly how Michael Mann’s Hockey Stick Graph was a complete fabrication. Data was omitted, temperature sets were mixed and dissenting scientists were silenced to push through the IPCC’s narrative in support of the Kyoto Protocol.

I have done a few videos on this topic, since I started with my podcast, with scientists who doubt the “scientific consensus” on climate change.

Most notably is Dr. Richard Lindzen, Dr. William Happer, Dr. Valentina Zharkova and Dr. Judith Curry. They all approach the problem from a slightly different perspective, but at the end they conclude that this is at best an academic issue and does not deserve the amount of news coverage and religious like obsession from our political elite.

To those interested in the science of climate, Dr. Judith Curry runs a good blog with perspectives on both sides of the issue and Ron Bailey at Reason Magazine wrote a good article in 2019 that summarizes the official science as well as the uncertainties. The biggest dispute being climate sensitivity i.e. how much warming can you expect from the increase of C02.

Climate change prediction science reports “a range of possible values for future global warming. It is as false scientifically to say that the climate future will be catastrophic as it is to say with certainty that it will be merely lukewarm.” He adds, “Neither is there a cliff edge to fall over in 2030 or at 1.5 degrees C of warming.”

Continued economic growth and technological progress would surely help future generations to handle many—even most—of the problems caused by climate change. At the same time, the speed and severity at which the earth now appears to be warming makes the wait-and-see approach increasingly risky.

Will climate change be apocalyptic? Probably not, but the possibility is not zero. So just how lucky do you feel? Frankly, after reviewing recent scientific evidence, I’m not feeling nearly as lucky as I once did.

Dr. Richard Lindzen put the data in a different perspective in an article where he drew a comparison between Global Warming, Lysenkoism and Eugenics, the two pseudoscientific beliefs that respectively swept across the Russian and Western elites in the beginning of the last century. The former led to the Holodomor, the Great Famine of Stalin, and the later set the pretext for the German elite’s justification of the Namibian Genocide and the Jewish Holocaust.

South Africa had its own version of a pseudo scientific theory infiltrating an elite that eventually became public policy. The Afrikaner elite was heavily influenced by Werner Eiselin’s Anthropological work that suggested that the native should learn only through his own language in order to “preserve his culture”. His ideas taken to its logical conclusion permeated through the Apartheid establishment and entrenched the logic of Bantu Education.

A Professor of Anthropology before he became a chief inspector of native education in the Transavaal, Eiselen had a great respect for the particularity of blacks and genuine concern for the preservation of Bantu language and culture.[13] To him there was little doubt that blacks would learn better through their own languages.

Phenomena like HIV/AIDS, Covid19, Global Warming, Eugenics, the Diet Heart Hypothesis, and Lysenkoism all follow the Gold Effect. The dominant scientific paradigm is accepted by a scientific body through the social process as opposed to being based on conclusive evidence. Those who dissent from the official narrative are chastised and burned on the virtual stake and termed “denialists”. The very term denialism is written in the Malleus Maleficarum – the manual that was used to teach the clever intellectuals at Harvard on how to identify witches.

And in the first place, if the accused remains firm in his denials and can in no way be induced by honest men to confess the truth, the following manner of sentence, which is in some respects definitive, shall be used.

As the manual reads, the punishment for commuting the unspeakable crime of sticking to one’s conscience and belief was execution.

If the person to be questioned is both found to be equivocal and at the same time there are other indications sufficient to warrant his being tortured, let both these facts be included in the sentence, as they are above. But if only one or the other of these hold good, let that one only be put in the sentence. But let the sentence be soon put into execution, or let them make as if to execute it. Nevertheless let not the Judge be too willing to subject a person to torture, for this should only be resorted to in default of other proofs

I first came across the Gold Effect after hearing a speech by the late physicist Freeman Dysan who argued that the correct position for a scientist is to be a heretic and in the minority.

In his speech, Dysan gave a eulogy to the late scientist Tommy Gold who went into different scientific fields to try to break apart the consensus paradigm. Gold’s insights into the inner vibration of the ear and the Abiogenic Theory of Fossil Fuels were initially ridiculed by the “scientific consensus”, but later they were accepted as official dogma.

I had a conversation with Ned Nikolov and Karl Zeller who propose that the entire Green House Effect is suspect and that the universe is governed by a Temperature Pressure Relationship i.e. it closer resembles a car’s piston than a blanket. I remain skeptical to this interpretation as gasses with convection do not normally follow a pressure temperature relation and the laws of radiation transfer are well established. So do many physicists and climate scientists, but I do give credit to Nikolov and Zeller for making me reflect the foundations of atmospheric physics.

But even if Heller and Nikolov are wrong, as Dr. Lindzen shows there is nothing to be concerned about regarding C02 on the basis of the current official assumptions. The black line in the graph below is the projected “dangerous warming” from the IPCC report from the worst case, discredited and impossible RCP8.5 scenario. Clearly this is a temperature that most humans can handle.

The residue of this variation is shown in yellow below.

The above graph is not particularly scary, but of course to generate propaganda one can always stretch the figure, omit the error bar, truncate the y-axis and scare the public with the following graph known as the “anomaly”.

On the issue of climate change, I prefer to be a heretic as the entire story and the solutions being offered seem closer to theology than being based on actual persuasive evidence.

The bleak worldview of the climate activists seems to owe more to Medievalism than to the Enlightenment. As much as 15 percent of the population in preindustrial Europe is estimated to have been permanently celibate. Like the sex-hating Christian militants, today’s greens tend to be hostile to the idea of procreation, particularly in wealthy countries. Family-oriented people may also object to Ecotopia-like calls for restrictions on having children due to their “carbon legacy,” a proposal already endorsed by climate researchers at Sweden’s Lund University and Oregon State University in the US.

Clearly, the future being offered is not better for most—it is a future marked by downward mobility, less travel, and more crowded living conditions under perpetual greenflation. Eric Heymann, a senior economist at Deutsche Bank Research, may be an advocate of the “Great Reset” (or something like it), but he still warns that Europe’s Green Deal and its goal of climate neutrality by 2050 threaten a European mega-crisis which may well lead to a “noticeable loss of welfare and jobs.” We will even need to change how we eat: Some scientists suggest we will have to shift from hamburgers to such delightful concoctions as “maggot sausages.” Another has suggested that we recycle ourselves and discover the finer points of cannibalism.

As an engineer that works in the energy sector am I unconvinced that there is a way for the world to get of Fossil Fuels during this century, given the simple fact that Africa and Asia are expanding their populations and broadening the middle class. As Cambridge’s Prof Michael Kelly shown in his address to the GWPF one has to believe in unicorns or utopias for Net Zero to be even remotely possible.

The only solution is to adapt to climate change, even under the assumption that the Doom and Gloom Crowd is correct. Rather prepare for a warmer world and accept the changes that come with it and mitigate C02 were one can.

So why is no one talking about the fact that Florida may not be able to vote in the Nov. election? What happens then? There is no change in Congress? The Dems would love that!!

Climate Change: The Doxa Of The Green Faith – Life, Death and all between