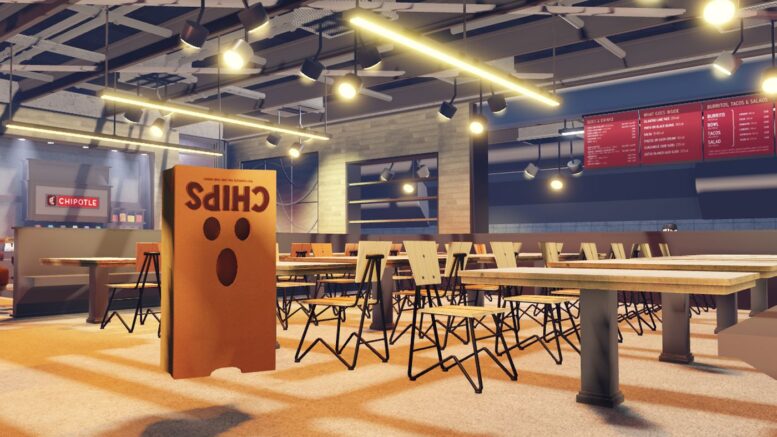 Chipotle built a virtual store in Roblox where avatars can dress up in costumes such as a Chip Bag Ghost. PHOTO: CHIPOTLE MEXICAN GRILL

Please Share This Story!
PDF 📄
From Verizon to Nike, corporate giants are embracing the Metaverse as a place to hock their wares. The idea of separating people from reality makes it much easier to manipulate them into making purchases that they otherwise might not have made. The Metaverse is the height of social isolation and data mining, both of which contribute to Mass Formation. ⁃ TN Editor

Brands had been toying with the metaverse for some time before Facebook’s recent name change turned the term into a household word. Now some of them are getting serious.

Companies including Chipotle Mexican Grill Inc., Verizon Communications Inc. and streetwear brand Vans earlier this year built their own digital worlds on metaverse-like platforms such as Roblox Corp. and Fortnite Creative in an attempt to improve brand recognition and get existing customers more engaged.

Their efforts are a sign that advertisers, which have long been hesitant to spend marketing dollars on experimental efforts, are warming to new digital platforms. Facebook’s late October announcement that it would develop a metaverse environment, including investing $10 billion on the effort this year and changing its name to Meta Platforms Inc., is expected to accelerate that trend.

“Facebook saying, ‘We’re going to put $10 billion into this,’ I think provides a lot of incremental confidence that this would be a worthwhile experiment,” said Brian Wieser, global president of business intelligence at GroupM, a media-buying company inside ad agency behemoth WPP PLC.

The metaverse is a relatively new term to describe a futuristic internet with virtual experiences where people can customize avatars—digital images representing themselves—to play games, make virtual purchases and interact and attend events such as concerts and comedy shows. Roblox is currently among the highest-profile metaverse-like platforms.

This futuristic version of the internet is unlikely to become a significant branding platform for companies anytime soon. Meta Chief Executive Mark Zuckerberg said last month that the metaverse was five to 10 years away from being developed and adopted by a large number of users. Marketing executives from companies currently present in the metaverse, including Vans and Chipotle, said they have yet to use the platform to sell physical goods.

Some marketers are also concerned the metaverse may just be a repeat of Linden Lab’s virtual world Second Life, said Kieley Taylor, global head of partnerships at GroupM. Second Life, a community made up of islands and avatars developed by individuals and businesses, launched in the early aughts to much fanfare from advertisers, but never really had a meaningful enough user base to stay relevant or grow large enough for brands to benefit, said Mr. Wieser of GroupM.

Others believe things will be different this time around. Chris Brandt, Chipotle’s chief marketing officer, said he expects consumers to welcome a more immersive web experience, especially after pandemic confinements led them to change their habits.

Maybe just maybe at best you might get kids and young people in to this cartoonish bull shit world but I can’t believe anyone with common sense that has to work for a living in the real world would even consider this obvious freak show. Yes people still have to work, they can’t automate everything. You people give these rich freaks way to much credit. There is no one that smart to pull any of this shit off. I find it hilarious and will watch the freak show from here. All of this sounds like a bunch of billionaires who… Read more »

We have giant screens glued over the eyes for virtual reality nonsense. Goes with the face bra sewed onto the ears. Literally the metaverse is the Matrix, meaning “containter, vessel, womb” of a woman or mother. They want us all infantilized and dependent on the nanny-state, enslaved and DNA, RNA modified, patented and owned by Bill Gates and the pedophile elites Monsanto’s of the world. No more rich countries or third world hitholes, they will be replaced by the imposition of global communism and one world religion of Islam. Instead we must become like little children, but not led astray… Read more »

In your Editorial opening comment, what did you mean by Mass Formation?