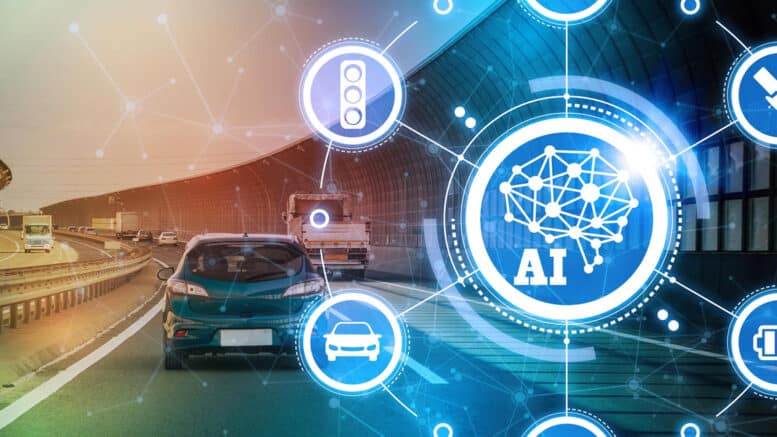 Please Share This Story!
PDF 📄
Technocrats invent because they can, especially when it comes to surveillance and monitoring. Recor’s business leverages the use of AI tracking by offering new revenue streams to cash-strapped states. ⁃ TN Editor

As Rekor Systems president and CEO Robert Berman proudly boasts, “because our technology works so well for vehicle recognition, we do more, we identify the vehicle’s make, model, color, body type, bumper stickers or window decals, rust, dents and other things like speed of travel and vehicle direction.” (approximately 2.40 of the video.)

Berman revealed that fast-food restaurants are using Rekor’s vehicle surveillance program “because it helps the folks who are making the food to do it more efficiently” claiming that it helps companies like Starbucks, ID customers who order the same thing everyday.

Rekor bills itself as an AI-driven vehicle recognition company, but all it really is; is a AI-driven license plate reader company that “operates in over 500 regions worldwide.”

A recent article in One Zero, revealed that Oklahoma is using COVID as an excuse to secretly create a statewide mass vehicle surveillance program using Rekor to help raise much-needed funds.

“Oklahoma, which has seen its tax revenue plummet alongside falling oil prices, announced a statewide rollout of Rekor One in November to track uninsured motorists.”

From airports to schools and now vehicles, is there no end to using COVID to increase public surveillance?

A Rekor press release from November 2020 reveals just how big their vehicle surveillance program is.

“Use of the Rekor One platform by Oklahoma’s Uninsured Vehicle Enforcement Diversion Program (UVED) Program furthers the state’s mission to decrease the number of uninsured motorists on the road and keep matters out of the court system. The platform allows for real-time detection of non-compliant vehicles and instant data consolidation into a regularly updating insurance database connected to the state’s enforcement programs. Additionally, Rekor’s AI-driven technology identifies a vehicle’s make, model and color—providing additional validation for confirming vehicle identification.”

Rekor and the Oklahoma District Attorneys Council claim the program is an improvement over being stopped and fined by law enforcement.

“Instead of receiving a criminal court summons and a $250 fine, uninsured motorists captured by Rekor’s cameras, which are mounted on utility poles and mobile trailers, are sent a violation notice to their home, hit with a $174 citation, and must enroll in an insurance policy through Rekor’s insurance portal.”

So instead of being stopped and fined by public officials, Oklahoma drivers should accept a statewide vehicle surveillance program that is designed to get more money out of people by mailing fines to their homes and forcing them to use Rekor’s insurance?

As One Zero points out, if people cannot afford to pay their corporate overlords they could be prosecuted.

If an individual can’t pay, however, they may face prosecution. “Prosecutorial discretion attends to those who demonstrate acute financial distress,” UVED Program Director/Prosecutor Amanda Arnall Couch said in an email. “The purpose of this program is to help the most vulnerable.”

The Tea Party rebellion started on a lot less than what states like Oklahoma are doing.

Mass surveillance masquerading as public safety leading to corporate fines and prosecution, because someone could not afford to pay their automobile insurance during a pandemic, seems like a stretch even for the Police State.

Rekor wants their corporate/law enforcement vehicle surveillance program to spread across the country.

“It’s common business practice that you want to expand your success. We know we are successful in the state of Oklahoma and other states have taken notice,”Rekor Executive Vice President Charles Deglimini said.

Cash-strapped governments are turning to tech that converts cameras into automated license plate readers to ID, track and penalize drivers for all sorts of offenses.

States like Louisiana, Nevada, and Florida have been tracking uninsured motorists with ALPRs, but Oklahoma is the first to implement a statewide vehicle surveillance program.

As I wrote about last year, Rekor is using video doorbells like Ring to create a 68 million neighborhood vehicle surveillance network.

“Rekor is going to great lengths to turn smart homes into neighborhood vehicle surveillance networks. To entice suburban residents, it’s offering a steep price drop — from the $50 a month it charges businesses and law enforcement agencies to $5 a month, less than the price of a newspaper subscription. Rekor also allows your neighbor to identify a limited number of vehicles for $99, $395 or $1995 a month.”

And that’s not all, Rekor also tracks, ID’s and fines vehicles in parking lots and permit parking only spots.

One thing is clear, government officials are using COVID as an excuse to create mass surveillance programs run by private corporations.

“What you seem to have here is a mass surveillance program being created to satisfy the insurance industry, and to potentially generate money for the government” Dave Maas, director of the Electronic Frontier Foundation warned.

The mass media and government officials want everyone to look the other way as they use COVID as an excuse to let corporations profit from all manners of public surveillance.

Here’s a scenario I wrote/created six or seven years ago… There’s two cops in the locker room getting ready for their shift, Carl says to Bill… artificial intelligence — AI for short — is going to replace us — take our jobs because it can spot crimes and infractions way more efficiently than is humanly possible. We’ll soon be out of work. To which Bill replies… considering victimless “crimes” and the non aggression principle libertarians are so fond of touting the merits of, it could be much worse, AI could identify us as the real criminals. Consider that a segue… Read more »

Maybe it’s just a programming error?
Artificial intelligence does not even reach the intelligence of a fly. That is probably the most dangerous thing about it.

There’s class warfare, all right, but it’s my class, the rich class, that’s making war, and we’re winning. NYT 26.11.2006 Warren Buffet
I believe that the class struggle from above is given too little consideration across the board. The shame of the parties is over.
George Sorros donated $1.7 million to Antifa. It’s in his leaked tax returns.

Massprivatei has seconded mass surveillance in the article. Making the secondary primary seems to be the general rule of covid. The “cases” are particularly vexing next to the pandemic. That the vaccination could be a kind of demographic control, I can hardly imagine. The migration of peoples has been deliberately triggered, including the cheering for the flood. It is also precisely the peoples with the highest birth rates who have immigrated to Europe. Solvable problems have been postponed for decades, only to be gradually brought to a boil-over with wars. The West is better capitalized than Africa. That should and… Read more »

Well, well, well, on a side note looky here they claim the vaccinated are more likely to have south African variant of so called original Covid than the unvaccinated. In other wards the side effects of the so called vaccines are now called a south African variant. Wait and see more excuses (from diseases caused by vaccine) for what they have done in experimenting on the worlds population. See here: https://www.timesofisrael.com/real-world-israeli-data-shows-south-african-variant-better-at-bypassing-vaccine/ I tried to talk my friend out of it yesterday who has serious bad asthma, and she is in her 70’s. But all her friends got it and she… Read more »