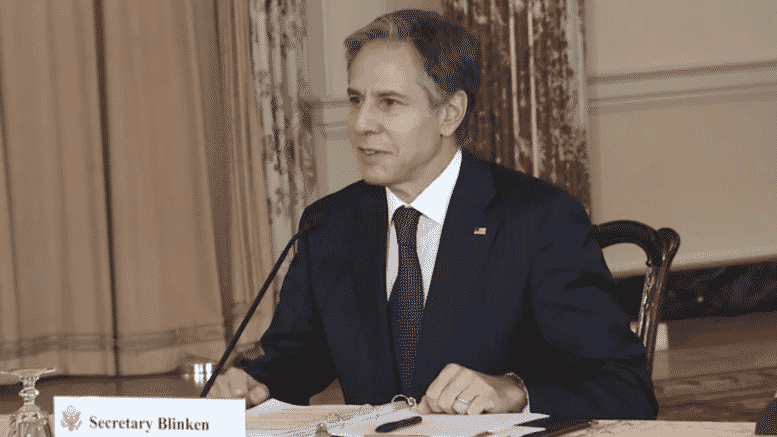 Please Share This Story!
PDF 📄
The next shoe to drop in Technocracy’s coup d’etat is to declare war on cyber criminals. The current news cycle is full of stories about cyber security and politicians are reciting the talking points like parrots in a pet store.

The end result will be calls for a global registration system for all Internet users in order to isolate the evil-doers. In the process, all Internet activity will thus be monitored, analyzed and judged for its content.

In the meantime, be watching for big cyber events that the media will spin into a frenzy of fear mongering stories. ⁃ TN Editor

Secretary of State Antony Blinken in an appearance on “Axios on HBO” previewed what he expects to come out of the Putin-Biden summit set for June 16 in Geneva. The short answer is: not much except for vague warnings and threats, it appears. Blinken said during the interview that the US president intends to warn Putin “directly and clearly what he can expect from the United States if aggressive, reckless actions toward us continue.”

While explaining that Washington would prefer a “more stable” relationship with Russia, Blinken also sought to distance the White House from growing criticism that Biden is getting ‘weak’ on promises to “stand up” to Putin, particularly after recently dropping sanctions on the German company overseeing completion of the Russia-to-Germany Nord Stream 2 pipeline.

Blinken tried to assure Axios’ Mike Allen that Biden is meeting with Putin face to face to deliver a tough message:

Biden is meeting with Vladimir Putin nine days from now “not in spite of” the cyberattacks that disrupted U.S. meat and gas supplies: “It’s because of them.”

He further repeated the prior common assessment of US officials which don’t see any “breakthrough” coming from the meeting.

“I can’t tell you whether I’m optimistic or not about the results,” Blinken said. “I don’t think we’re going to know after one meeting, but we’ll have some indications… We’re prepared either way.”

“We’ve certainly seen China … try to fill voids where we’ve been relatively disengaged.” And he added the caveat –  “and maybe not in a way that advances our interests or values.”

“Our partners see the same thing that we do,” he explained. “If you’re looking at all of the really big problems that we’re trying to solve — … like the pandemic, like climate change, like emerging technologies … — no one country can do it alone.”

freedom of speech will be the next and most important freedom to be lost via new internet protocols that will put a deep chill on speaking freely. We currently see this with the censorship drive by the big social network platforms of posted information that does not align with “their narrative.” The comment sections. already under censorship, will be next universally. Internet cyber attacks, as ‘inside attacks’, all with plausible deniability could be the next tool and event.used to rein in free speech. If there is a hill to fight and die on this is the biggest and most strategic… Read more »