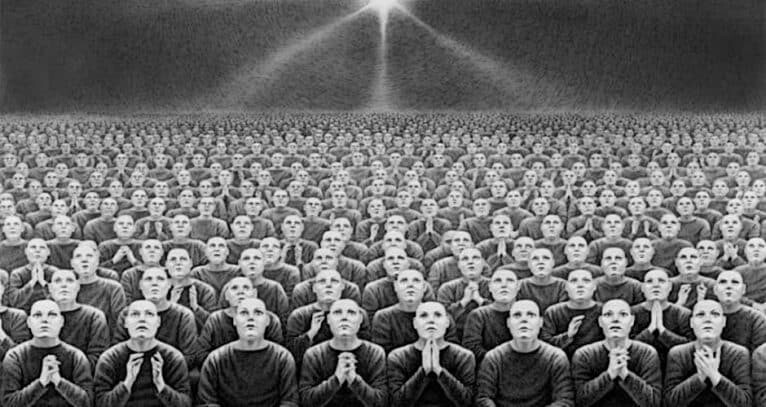 Just like today, early Technocrats were obsessed with distribution of goods to a targeted region of the world that they called a Technate. In 1934, the North American Technate included Greenland, Canada, United States, Mexico, Cuba, the Caribbean, all of Central America and the northernmost countries of South America. However, no mention was ever made as to how those sovereign nations, each with their own particular type of government, would be persuaded to voluntarily discard those structures and cede control to a group of megalomaniac scientists and engineers.

Nevertheless, framers of Technocracy proceeded as if all of those nations would magically succumb to Technocracy’s scientific dictatorship, and they documented seven key requirements that must be met before the system could function properly.

These seven original requirements are obviously just as valid and operational today as they were back then. [Scott, Howard et al, The Technocracy Study Course, p. 232]

1. Register on a continuous 24-hour-per-day basis the total net conversion of energy

Conversion of energy means creating useable energy from stored energy like coal, oil or natural gas; when they are burned, electricity is generated. Hydroelectric and nuclear also convert energy. There were two reasons to keep track of useable energy: First, it was the basis for issuing “energy script” to all citizens for buying and selling goods and services. Second, it predicted economic activity because all such activity is directly dependent upon energy. (Note that Technocrats intended to pre-determine how much energy would be made available in the first place.)

2. By means of the registration of energy converted and consumed, make possible a balanced load

Once available energy was quantified, it was to be allocated to consumers and manufacturers so as to limit production and consumption. Technocrats would have control of both ends, so that everything is managed according to their scientific formulas.

The modern Smart Grid, with its ubiquitous WiFi-enabled Smart Meters on homes and businesses, is the exact fulfillment of these two requirements. The concept of “energy web” was first revitalized in 1999 by the Bonneville Power Authority (BPA) in Portland, Oregon. A government agency, BPA had a rich history of Technocrats dating back to its creation in 1937. The “energy web” was renamed Smart Grid in 2009 during the Obama Administration. Note that Smart Grid was a global initiative that intended to blanket the entire world with this new energy control technology.

3. Provide a continuous inventory of all production and consumption

Technocrats were obsessed with aggregating inventory quantities in the economic system from beginning to end. Inventory would be stored in production facilities until it was ready to be delivered to consumers and producers. Only actual consumption by end-users would shrink inventory.

We see this concept used extensively in modern corporations, termed Supply Chain Management (SCM), where its goal is to minimize stored inventory (squeezing out the inefficiencies) and make for “just-in-time” manufacturing and consumption.

4. Provide a specific registration of the type, kind, etc., of all goods and services, where produced and where used

This granular level of data tracking drills down to specific items and would ostensibly assign a trackable serial number to every item manufactured, shipped and ultimately consumed by individuals or other manufacturing processes. Such detailed item tracking is a core value of modern Supply Chain Management theory and practice.

The greatest enabler of Technocracy is the Internet of Things (IoT), where all connected devices are networked together via the latest 5G wireless technology. Tom Wheeler, former head of the FCC, praised 5G and the IoT in 2017: “If something can be connected, it will be connected”.  The harvesting of data from billions of sensors embedded in the IoT will, for the first time in history, provide real-time data collection. In turn, this data flow will put wind in the sails of Artificial Intelligence algorithms designed to control society and people in it.

5. Provide specific registration of the consumption of each individual, plus a record and description of the individual

This requirement is a cross-check of inventory against actual consumption by a verified individual. Thus, if something is bought but not consumed immediately, the Technocrat overlords could take action to stop such behavior. It must be understood that Technocracy intended to altogether eliminate private property, savings, and inheritance, etc. The hoarding of consumable items was viewed as unauthorized savings.

6. Allow the citizen the widest latitude of choice in consuming his individual share of Continental physical wealth

We must understand this requirement from the perspective of a Technocrat. First, there would not be a wide range of selection of goods and services because there would be no competition between manufacturers. Products would be designed and manufactured by Technocrats at their sole discretion. The real thing in view here is the aggregate amount of “Continental physical wealth” and how much of it you deserve to consume. Technocrats largely view humans as so many cattle in a feed lot, existing only to be fed a managed diet from birth to death, housed and shielded from the weather, medically treated for maximum efficiency, etc.

7. Distribute goods and services to every member of the population

The key to this last requirement is that Technocrats demanded that every single person in the Technate would be forced to participate. As today, outliers were not to be allowed. We see the tagline “No person left behind” throughout the UN’s literature on Sustainable Development.

According to The Technocracy Study Course, the anticipated and promised “end products” would be:

Not surprisingly, these outcomes overlap perfectly with the United Nations Sustainable Development Goals (SDGs) adopted at the 2030 Agenda conference in September 2015:

At the United Nations 1992 conference in Rio De Janeiro which produced the Agenda for the 21st Century (known as Agenda 21), few realized that it was firmly rooted in Technocracy. Nor did they suspect that its interim name had been changed to “New International Economic Order” by the Trilateral Commission in 1973.

In sum, the above seven requirements are being implemented throughout the world, although Americans should be most concerned about their own country. Look past the thinly veiled utopian promises and you will see only an authoritarian scientific dictatorship run by megalomaniac Technocrats. George Orwell said it best in his book Nineteen Eighty-Four: “If you want a vision of the future, imagine a boot stamping on a human face – forever.”

Google is a thoroughly Technocrat organization. In 2018, an internally produced video was leaked, called The Selfish Ledger. The concepts presented are futuristic yet centered on managing all of society and all of its inhabitants.

Deeper Discovery Into Origins Of The Green New Deal

Hum, the video kinda shows a sorta ‘book of life’. All seeing and all knowing is the theory, but it can only go so far. “And the devil that deceived them was cast into the lake of fire and brimstone, where the beast and the false prophet are, and shall be tormented day and night for ever and ever. And I saw a great white throne, and him that sat on it, from whose face the earth and the heaven fled away; and there was found no place for them. And I saw the dead, small and great, stand before… Read more »

Let Gods Kingdom happen soon before this disgusting and ugly treatment of Gods Creation is realised.

I know the Lord wants us to fight this.
The only thing that encourages me is our enemy is so evil, God will not let him last long.
Goliath blasphemes. Reach for that stone.

Delusional idiots longing to play God and be worshipped by us once they have remade us into their own transhumanist concept of what Humanity Ought to Be.

From my website: Day by day we record our journey here upon the earth. Our Creator provided each of us a Book with ink and pen in which our life to write. Then at the appointed time He will read what we recorded upon our life’s page. Word by word, line by line, chapter by chapter, wechrt our destiny. Our mortal life upon the earth etched within the DNA of our soul mind and heart, then then written within The Book Of Life; what we recorded upon Our Life’s Pages. To guide us on our journey we have Gods Holly… Read more »

Expect more of the same on steroids. Technocrats, bureaucrats and the rest of the satanic cabal are leading humanity into the great tribulation. That is what all of their flowery promises will amount to, including more disease and suffering along the way.

Kind of sounds like the idea of “social justice” for all.

[…] to note that Technocracy, pushed mainly starting in the 1930’s, had an end goal of recording and tracking every person’s energy consumption almost real-time.  There was no way of doing this at that time, and there still was no […]

“However, no mention was ever made as to how those sovereign nations, each with their own particular type of government, would be persuaded to voluntarily discard those structures and cede control to a group of megalomaniac scientists and engineers.” Answer. Common sense. Canada and the USA have been deliberately destabilized for decades, with both countries on the path to mass secession by “negotiation” to adopt the EEC-EU model, followed by radical decentralization into multi-ethnic international city-states composed of ethnic cantons. The city-states will be federated in the continental regions; and the regions will have regional governments; and all will be… Read more »

[…] Day 6: Technocracy’s Necessary Requirements, I listed the original items that need to be in place for Technocracy to take hold. These […]