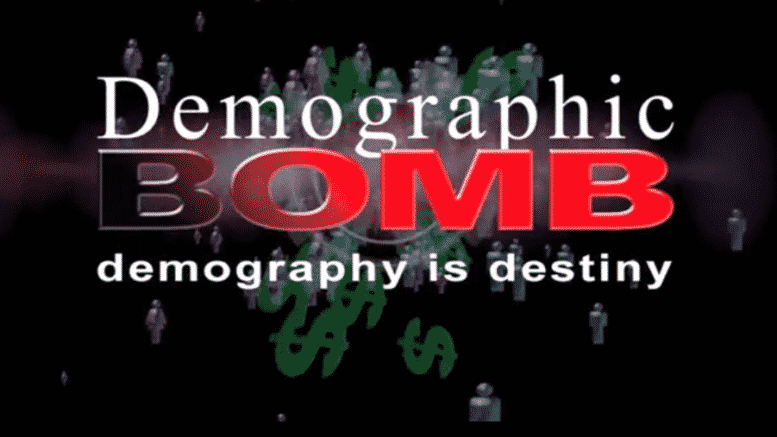 For over 20 years, demographers and sociologists have known about and documented the world’s population collapse, and yet the world persists in hysteria over population blowout. This has paralleled global warming hysteria as a reason to implement Sustainable Development, aka Technocracy.

For a thorough and documented analysis, Technocracy News highly recommends viewing Demographic Winter and Demographic Bomb which are available in DVD and streaming video on Amazon. ⁃ TN Editor

Forget debt and deflation: the biggest threat to the global economy and the future of modern civilization as we know it, may be demographics, according to a recent Euromonitor study.

Whereas over the past decade policymakers have been mostly focused on how to reverse the global infatuation with debt and how to reverse what appears to be a structural decline in inflation (assuming the economist-accepted definition of CPI which conveniently “hedonicaly adjusts” such surging costs as shelter, healthcare, education and in many cases food), an even more troubling trend has been observed in recent years: due to a culmination of factors including falling fertility rates, rising divorce rates and expensive real estate, family sizes across the world are shrinking.

While this trend is troubling, it is only set to deteriorate, and RBC’s Nike Modi writes that he expects the US and other developed markets to take after Japan. Japan’s population is older, more tech focused, more urban and according to Euromonitor is a market where couples with children are expected to decline 5% from 2018 – 2030.

This demographic decline has widespread consequences across all aspects of the global economy: as family sizes decline, it will ultimately impact living space. In developed markets, large cities will likely see increased pressure on real estate and rent prices for apartments adaptable to childless couples and smaller families. This, RBC predicts, will likely in turn lead to demand for smaller household goods, smaller pack sizes overall and less space for small appliances, among other types of more discretionary items.

Another notable consequence of this global “Japanification” is that fewer kids will result in a world with more “indulegence”, adversely affecting commoditized providers of goods and services. With no or fewer children, RBC’s proposes that “premiumization” will emerge as a likely outcome. What this means is that for couples who have children, they will concentrate their spending on the one child they have, driving increased demand for premium diapers and natural and organic foods and beverages, among other categories. And since the couples have few children or no children at all, they are also more likely to indulge themselves – driving premiumization across categories, particularly in beverage alcohol and beauty where we have noticed this trend for some time and would only expect it to continue.

In short, a (shrinking) world of growing extreme polarization – across wealth, income, ideology and political views – will also soon lead to a growing schism between the brand leaders and all the aspirational providers of goods and services who fail to become category leaders. This will ultimately accelerate the world’s shift to monopolization as those companies that dominate market share will further flex their ability to redirect discretionary cash flow toward carving out even more defined “premium” niches, resulting in an increasingly challenging world for those who hope to attract the consumer’s dollar with a race to the bottom in pricing terms. Whether this subtle shift to further entrench aspiring category monopolies will result in an sudden upward inflection point in prices remains to be seen, however if the bigger, and far more troubling trend of global “demographic doom” is left unreversed, it will have profound consequences on all aspects of modern life.

I’ve heard this many times over the last two decades–the population is declining worldwide. However, the World Population Clock has been going up yearly. In the last ten years we’ve gained a billion humans. According to the Clock we are now 7.7 billion worldwide. How do you address this metric?

Check this documentary out: https://www.youtube.com/watch?v=L8XQjfG2wYc

If I thought the world was ending and YT was the only site that had the info I needed I might use it. Otherwise, I do not use YT. If the video is posted at another location I’m happy to go there.