Please Share This Story!
PDF 📄
One cannot trust any propaganda coming from China, but its latest actions to lock down major cities again threatens to disrupt the global supply chain. The big question is, would China sacrifice a few million of its citizens to destroy capitalism on behalf of Technocracy? ⁃ TN Editor

The global economy is in disarray as the war in Ukraine unleashed a commodity shock with increasing risks of stagflation. Adding to the turmoil is an outbreak of COVID-19 in China that may unleash another supply chain crisis.

News from China over the last day shows a new outbreak of the highly contagious omicron variant has infected more than 5,000 people, the most since the early days of the pandemic in early 2020. China’s zero-tolerance approach has shuttered factories and placed some 51 million people into some form of lockdown. 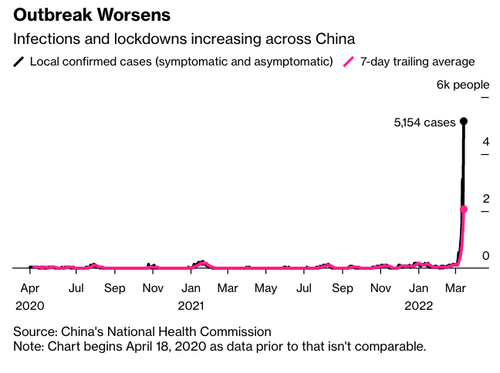 As of Tuesday, omicron variant infections have been reported in 21 provinces and municipalities nationwide, including the capital of Beijing. According to CNN, five cities are in lockdown, including Changchun, Jilin, Shenzhen, Dongguan, and Langfang. 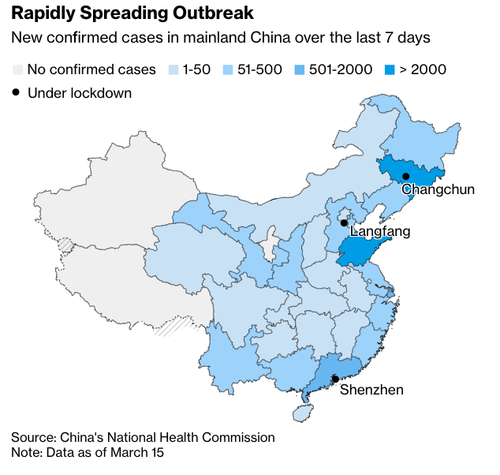 Lockdowns have forced factories to idle production and risk snarling production from Apple iPhones to Amazon Echo & Alexa devices to Toyota SUVs to smart television to all sorts of other electronic devices. Disruptions to exports may induce shortages and drive up inflation, just as the Federal Reserve embarks on hiking interest rates to control inflation at four-decade highs.

A Bank of America Corp. survey of fund managers published on Tuesday showed confidence in global growth this year is the lowest since July 2008, and stagflation expectations have jumped to a whopping 62% of respondents.

“You take all these little paper cuts and you start to add them up and you could be looking at a potential significant slowing of the global economy,” said Jay Bryson, chief economist at Wells Fargo & Co.

China’s zero-tolerance policy has reminded us that supply chains are still subjected to massive disruptions. The lockdowns couldn’t come at a worse time, as spring tends to be one of the busiest shipping seasons of the year.

Shenzhen’s 17.5 million residents were placed under lockdown on Sunday. The city resides in Guangdong, a coastal province of southeast China known for its manufacturing hub and ports, which account for about 11% of China’s economy. The province accounted for 23% of China’s shipments in 2021.

“The forceful action to contain the worst COVID-19 outbreak since early March will deal a direct hit to the production and consumption sides of a province that accounts for 11% of GDP. Previous steps to contain virus flareups left manufacturing unscathed for the most part. This lockdown will hit output in key industries such as tech and machinery that feed into global supply chains,” Chang Shu, chief economist for Asia, said.

“Given that China is a major global manufacturing hub and one of the most important links in global supply chains, the country’s Covid policy can have notable spillovers to its trading partners’ activity and the global economy,” said Tuuli McCully, head of Asia-Pacific economics at Scotiabank.

According to Stephanie Loomis, vice president of International Procurement, the global impact of lockdowns could roil supply chains once more.

“If they don’t let any of these guys go to factories and produce goods, then nothing will move,” Loomis said. “It’ll just stop.”

We question if container ships will limit delivering Chinese goods to the US because of factory shutdowns as the demand to ship sinks. This may lead to depressed shipping rates on an intermediate basis because of the lack of demand. However, long term, shipping rates should rebound due to a backlog of products that would need to be shipped once factories reopen.

“A China slowdown would exacerbate the risk of stagflation and global supply chain problems,” said Zhang.

And when you thought things couldn’t get any crazier for the global economy, they certainly did and risked further economic turmoil that may roil global supply chains, just like what happened in the early days of the pandemic.

And yet…..people are still thinking that this CRAP is TRUE?! There is NO ‘OUTBREAK’ in China!! They’re, no doubt, LYING……or they’ve released another Bio-weapon….testing it out on their population. Either way…….like last time……I’M NOT PLAYING THIS GAME!!

[…] Does China Have Vested Interest To Kill Capitalism? […]