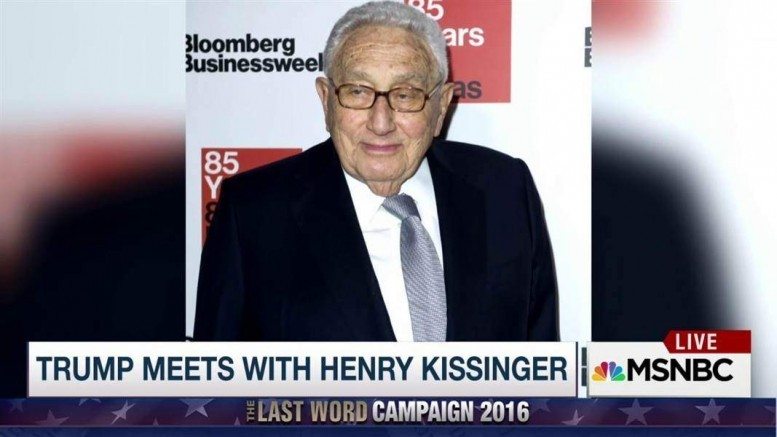 Please Share This Story!
PDF 📄
TN Note: This is a must read article. Donald has indeed met with Henry Kissinger and so it is now said, “All roads in 2016 lead to Kissinger.” Kissinger was an original member of the Trilateral Commission and one of its most nefarious members. He is still as powerful as ever, even though he is in his 90s. Note that the Barney Miller skit was squarely aimed at Antony C. Sutton and myself after we had co-authored Trilaterals Over Washington, Volumes I and II. It was an attempt to spread disinformation about the Commission and discredit its critics, of whom we were foremost.

I’m starting to feel a little bit like Jeffrey Tambor, who in this 1981 scene tells Barney Miller that it all leads back to Henry Kissinger and the Trilateral Commission. “The whole master plan is exposed…. Henry Kissinger, have you heard of him?” Nation readers have been hearing a lot about the 92-year-old Kissinger lately. First Hillary Clinton cited his approval as a recommendation for the Oval Office; which Bernie Sanders then jumped on to criticize Clinton’s interventionism; then, just last week, Barack Obama’s Pentagon presented Kissinger with a high honor. Now, news comes that Donald Trump, the presumptive Republican nominee, has met with Kissinger. Details about what they talked about are as of yet unknown. Yet as Tambor tells Barney Miller: “No matter who wins in November, they have their man in the White House!”

Kissinger has long had his man in the White House, a fact that is less testament to his influence than to his ability to accommodate to every right-wing lurch. In the 1960s, as a rising defense intellectual, Kissinger was a Nelson Rockefeller man, firmly entrenched in the center-right establishment. When he attended the infamous 1964 Republican convention in San Francisco, he was horrified by Goldwater supporters, whom he likened to fascists. Four years later, according to journalists Marvin and Bernard Kalb, he “wept” when Nixon won the Republican nomination. “Richard Nixon is the most dangerous, of all the men running, to have as president,” Kissinger said; “That man Nixon is not fit to be president.”

Then he called the Nixon campaign to offer his services.

Next came Ronald Reagan, whom Kissinger thought “shallow” and ignorant. It was, Kissinger told Nixon, “inconceivable” that Reagan might become president. When he did, Kissinger lobbied for a job. He didn’t get an official one, but used his prominence to defend Reagan’s remilitarization of the third world. As chair of Reagan’s Central American commission, he justified the death squads and Contras. Perhaps more consequential, as a pundit, he cheer led Reagan’s 1986 air strike on Libya, taken in response to Libya’s involvement in the bombing of a Berlin nightclub, which killed two US soldiers and one Turkish civilian. US planes hit a number of residential buildings, killing an estimated 15 civilians. Muammar Qaddafi’s daughter was also reportedly killed. The Reagan administration said its strike was “measured” and “proportionate” to Libya’s crime, citing article 51 of the United Nations charter, which grants nations the right to “self-defense.” This was, to say the least, a generous interpretation of that article, which most legal scholars at the time disagreed with.

Kissinger rushed to the Reagan White House’s defense. He appeared on ABC’s Good Morning America to voice his “total support” of the raid. Attacking Libya, he said, was “correct” and “necessary.” Asked if he was worried about a backlash—increased radicalization, reprisals, or a boost to Qaddafi’s stature—Kissinger said the bombing would “reduce the incidents of terrorism,” a woefully wrong prediction but nonetheless good example of the kind of logic that put the United States on the road to its current disaster in the Middle East. A case can be made that the invocation of article 51 in 1986 was both a vindication of the logic of Kissinger’s secret bombing of Cambodia (which Kissinger often justified as self-defense) and a preview of the 2001 Authorization to Use Military Force, which sanctioned not just the invasions of Afghanistan and Iraq but the ongoing open-ended “Global War on Terrorism.” Today, there’s no part of the earth where the United States cannot be said to be acting in self-defense.

We all need to read the recently published book Tell the Truth and Shame the Devil. by Gerard Menuhin, son of the famous violinist Yehudi Menuhin. It is available from http://www.barnesreview.org It is a wonderful book, though not directly about technocracy.