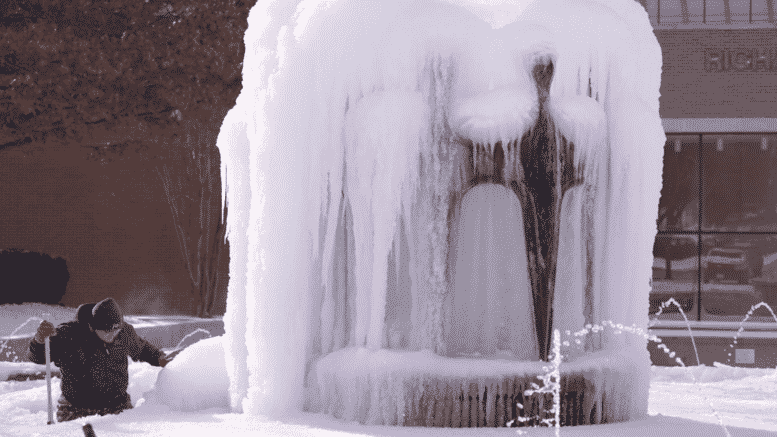 Winter storms are wreaking havoc in central and southern States. The climate news has turned catastrophic. People are angry; however, the federal government is too busy with its delusional psychosis over global warming and the COVID pandemic.

People don’t realize how bad and multifaceted the situation is. We have full-scale blackouts in Mexico, millions of Americans still in the dark with no power and heat, and the biggest outage in American oil and gas history. A loss on this scale is already generating an energy crisis, meaning each and everyone one of us will be paying more for energy.

The death count is climbing, with 20 deaths now reported, and the count is not over yet, and all scientists can say is that global warming caused by humans is partly responsible for making the cold longer and more frequent; that is what the press says, and we are supposed to believe every word of it.

Obviously, global warming cannot be responsible for so much cold, but for the brain compromised, anything is possible. Of course, climate change is real; it is only man-made global warming, which is the world’s biggest scam in man’s history is not. The real story of climate change has to do with the sun and its fluctuations and the reality that we are in for a few decades of cooling temperatures on Earth.

Thousands of low-temperature records have fallen across North America during these past few days alone, with record snowfall accompanying the cold, driving the continent’s snow cover extent to unprecedented levels. Through December 2020 and January 2021, the UAH Satellite-Based Temperature of the Global Lower Atmosphere revealed that the Earth cooled dramatically and has now dropped below the 1979 through 2000 average.

The massive winter storm that buried much of the United States in snow this week, bringing record-setting cold across the plains and knocking out the power grid in Texas, is not inconsistent with climate change, according to Noah Diffenbaugh, an expert climate scientist at Stanford University. He is correct if he was talking about cold climate change.

Bill Gates, the pretend climatologist and expert on CO2 and medicine, is the man most responsible (along with Dr. Fauci) for pushing a massive delusional psychosis onto the human race, not only about COVID but about CO2, the most necessary gas for life on Earth.

You would think someone in the government would say something useful like warning the public about the signs and symptoms of hypothermia. But the press is too busy covering their backsides about global warming. In today’s world, it is impossible for anyone to admit they are wrong, so as we move into the beginning of dangerous ice-age conditions, all we will hear about is how hot it has been these last few years. Meanwhile, in Texas, after days of little or no energy food, and water shortages have developed with people burning their fences and children’s toys to stay warm.

Big Victims of the Big Lie

Texas was warned a decade ago that its power grid was unready for the cold. But since the propaganda of global warming fooled almost everyone, no one seemed to take the reality of global cooling seriously. Bottom line: The Texas grid got crushed because its operators didn’t see the need to prepare for cold weather, and everyone will pay the price. And, of course, some people will die for it, and probably many people will get sick from fighting with hypothermia.

This week’s disruptive Arctic freeze isn’t just confined to North America –where this past Monday, a staggering 79% of the U.S. was below freezing. The cold is engulfing a large portion of the northern hemisphere, including central and eastern Europe, Northern and Western Asia, North Africa, and the Middle East, where snow is falling even in Lybia.

I hope that global warming is incorrect. But, I don’t think your statement, “Obviously, global warming cannot be responsible for so much cold”, is obvious at all. It would seem to be an example of common sense, but, for instance, as quantum mechanics has shown, there is no guarantee that common sense is correct. A hotter atmosphere means there is more energy in the atmosphere. More energy would permit more extreme weather, both hot and cold. What do you say, do you think this idea, is true, or false?

It’s bs. We are at the beginning of a new ice age (cold time), Eddy Super Grand Solar Minimum. Inform yourself and forget the lies of the climate sect. “We’ll know our disinformation program is complete when everything the American public believes is false.” — William Casey, CIA director, February 1981 These are the people paid by the Americans. They should have thrown him out of the country immediately after he said this. The criminals of the climate sect even cool the planet further with weather manipulation tools, and sick creatures like Dr. David Keith even want to shut off… Read more »

I would say that climate science is in its infancy and is unable to determine if more energy in the atmosphere, oceans or forested regions over a given time frame translates into whatever they think it might. Unless science can put all the inputs that effect climate into a model with the correct emphasis then what comes out is at best a very rough indeed guesstimate to pure unadulterated garbage.The pyramid cap has seized on this to drive agenda that favors themselves and so we must assume that their ‘science’ serves them and not us.

What Kerry means if that he and the world kleptocrats only have nine years left to raid the coffers on the USA and rip off the taxpayers before everyone realizes that there is no global warming and and these fools have crippled the country’s ability to produce energy and winter kill is a fact of life.

Amen- cold is a killer. The lying perps just need to change the government (e.g.,HR1) before the lie is exposed; then they can lie at will, cover up the inconvenient truth, and get off scott-free (like many other unaccountable “dear leaders” have done). Maintaining the status quo for big media that censor the threatening factual information will help their cause (so don’t expect any big-tech monopoly busting from this administration).

The planet’s weather as far as I can tell from my readings seems to oscillate from slightly warmer to slightly cooler periods that may mark a trend in one direction or the other but that the science needed to understand what these very long term trends are is almost completely lacking in its current understanding of such a complex system that includes not only planetary systems by stellar, interplanetary and inter stellar influences and the weighing of each as it effects climate here on earth. In other words we are being herded by powerful interests in those interests with story… Read more »

When the glaciers retake Europe, call me.

Plants are STARVED for CO2 (on the left side of their logistical growth curve); consequently, slight elevations in CO2 (which LAG, and do not cause, temperature increases) are, in reality, causing The Greening of Planet Earth. http://www.co2science.org/video/confirmed/gope_confirmed.php While there are many sources of true pollution that should be addressed, CO2 is not a contaminant of concern. Embrace the CO2 molecule, for it brings forth life! Of course, this detracts from the globalist claim that society must be controlled and population limited due to “anthropogenic factors” that degrade the world ecosystem; therefore, these crazy scientific facts must be CRUSHED by rigged… Read more »